Become a Member
Ad
Uma Bharti declared recently that that this year would be Jal Kranti Varsh, the year of a water revolution. The minister for water resources, river development and Ganga rejuvenation also said that at the crux of this revolution would be a programme to conserve water in every district of the country.

The government has made many blockbuster plans for water management not least of which is the ambitious but controversial river-linking scheme. The scheme entails massive engineering operations to move water from the lower Ganga and Brahmaputra rivers to water-scarce parts of central and western India. In its excitement over river-linking, the government seems to have forgotten the number of long-standing and seemingly unresolvable water disputes between various states. Tamil Nadu, for example, is fighting with all three of its neighbours over river water for agriculture and urban consumption.

River-linking was first proposed a decade ago by the former Prime Minister Atal Bihari Vajpayee of the Bharatiya Janata Party, which also in power now, and plans have been revived again under Prime Minister Narendra Modi's government. The current blueprint envisages connecting 37 rivers through 30 river links and constructing 3,000 storage areas along the way.

There is no doubt that India desperately needs to fix its water crisis. By international standards, a country is water-stressed if its per capita availability is less than 1,700. In India, water availability fell below that mark in 2010 and is likely to continue to decline. 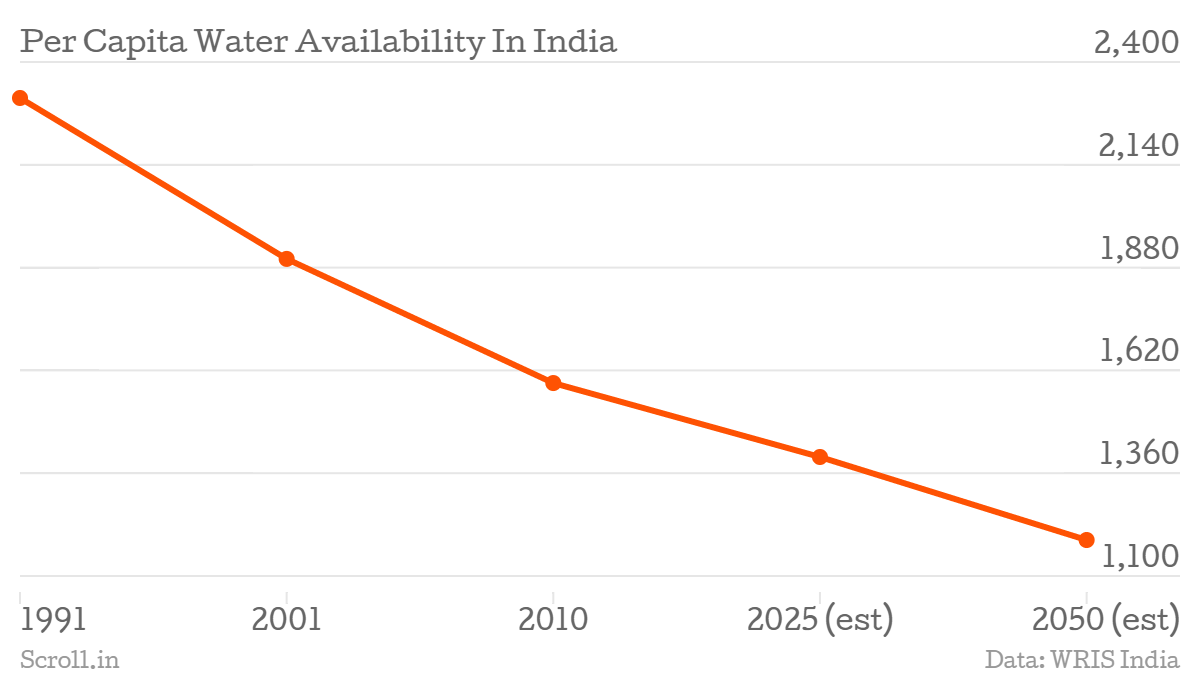 This is likely to aggravate the quarrels between states, but interlinking rivers, experts say, won’t offer a solution. "The river-linking project is going to increase the number of water-related disputes and will not resolve the water crisis in the country because there are so many states involved," said S Janakarajan, an economist at the Madras Institute of Development Studies in Chennai who works on water conflict.

Even existing water conflicts have been brought about the mismanagement of consecutive water resources ministries, said Parineeta Dandekar of the South Asia Network of Dams, Rivers and People, an informal network of organisations. "Most of these water conflicts are fuelled by what the ministry is doing, like building large water infrastructure," she said.

Here is a reminder of some water wars between the states:

Assam vs Arunachal Pradesh
The Arunachal Pradesh state government’s plan to build India’s largest hydropower project in the Dibang Valley set off unrest in Assam. The National Hydroelectric Power Corporation got the government clearance last November to build a mega-dam that will generate 3,000 MW of energy. The project has been stalled for six years ─ Prime Minister Manmohan Singh laid its foundation stone in 2008 ─ by large-scale public protests in Assam.

The project will curtail the rights of indigenous people over their natural resources in both states by submerging large parts of their forests. Environmentalists say the dam will also hurt fisheries, agriculture and wetlands downstream, and could leave villages in Assam vulnerable to flash floods. Last July, Assam chief minister Tarun Gogoi asked Prime Minister Modi that all hydroelectric projects be undertaken only after considering downstream impacts in consultation with the Assam government. As work on the dam moves ahead, the protests continue.

The genesis of the battle for water from the Ravi and Beas rivers lies in the reorganisation of Punjab in 1966. At the time, when the state was split into two, both entities, Punjab and Haryana, laid claim to a major portion of the water. A central government committee ruled that the water be split equally. In 1979, Punjab filed a suit in the Supreme Court asking for the government order to be struck down on the grounds that it had developed irrigation infrastructure assuming it would get more water than what was allotted. Haryana filed a counter-suit.

In 1986, the government set up a tribunal to adjudicate the dispute. The tribunal’s award reduced Punjab’s share of water and doubled Haryana’s on the basis of the states' existing water use. However, the Punjab government refused to allow the Sutlej-Yamuna Link canal, through which water was to be shared with Haryana, to be built on its side of the border. The completed structure in Haryana lies unused for a lack of water from Punjab.

In 2004, the Punjab government enacted legislation unilaterally, terminating all previous agreements with regard to river-sharing. The president made a reference to the Supreme Court, where the matter is still pending.

Karnataka and Tamil Nadu started fighting over the Cauvery river's waters in 1974, when a 150-year-old water agreement between the erstwhile Mysore State and Madras Presidency expired. The river originates in the portion of the Western Ghats that falls in Karnataka and is fed by the strong south-west monsoon. Its lower reaches in Tamil Nadu are replenished by the not-so-dependable winter monsoon.

The pre-Independence agreements were based on the principle that irrigation in the lower basin should not be hurt by projects upstream, that upstream projects should be cleared by the neighbouring government. Since 1974, Tamil Nadu has been protesting against Karnataka’s move of building four reservoirs and impounding the Cauvery’s waters.

The Cauvery Water Disputes Tribunal, set up in 1990, ordered the Karnataka government to release 205 thousand million cubic feet but the state refused to comply. Subsequent years witnessed much political jostling, with many claims and counter-claims being made by farmers in both states. The tribunal made a final award in 2007, saying that Karnataka must release 419 tmcft to Tamil Nadu. Karnataka protested by calling a state-wide bandh, and filed a review petition in the Supreme Court. After much back and forth over the years, the award was officially notified by the government only in 2013.

But the fight continues. The water resources ministry has circulated a draft cabinet note on setting up a Cauvery Management Board. Karnataka chief minister Siddaramaiah has opposed this move while the Supreme Court is still hearing the dispute.

The big fight between Tamil Nadu and Kerala over the 120-year-old Mullaperiyar dam in the latter's Idukki district's highlands centres around the structure's safety and the validity of an 1886 lease agreement. The Tamil Nadu government operates the dam and provides irrigation and drinking water to its Theni, Madurai and neighbouring districts.

Kerala contends that the archaic dam is not strong and endangers everyone living downstream. Scientific reports suggest that the dam may not withstand even low-intensity earthquakes. In 1979, the Central Water Commission, the technical authority on water resources, recommended that the dam  be strengthened, including by reducing the level of water to 136 feet from its full height of 152 feet. Tamil Nadu argued that the height be raised to 142 feet to counter terrible crop failures in the region.