Contribute Now
Ad
For the past week, Delhiites have been waking up to rather startling ads by Bharatiya Janata Party. The advertisements, plastered across half the front pages of major dailies, have been mocking Aam Aadmi Party leader Arvind Kejriwal and the Congress for misleading the people of Delhi. On Tuesday, BJP released the third advertisement in the series which talked about Arvind Kejriwal's threat last year to stall Republic Day celebrations and said that Kejriwal's gotra or sub caste is "updravi" (anarchist).

Another ad that champions Kiran Bedi as the "brave captain" of Delhi made it to the front and last pages of many newspapers. These ads are a reminder of the enormous amounts of money being spent by political parties.

Similar ads have been regularly appearing as a half-page display ad on the last page of Delhi editions of Indian Express, Hindustan Times and on the third, fifth or seventh page of The Times of India, among many other publications. Scroll used releasemyad.com, an online portal that allows users to book ads in over 40 publications, to estimate how much the BJP has spent.

The daily has a circulation of more than 9 lakh copies in the capital and a front page half-page ad would cost around Rs 65 lakh, according to the website.

The ad that has now become the talking point appeared on the third page of the newspaper on Friday. The cost for a half-page notice in the Delhi edition is around Rs 35 lakh.

The same ad on the Indian Express’ front page in Delhi, which has a circulation of around 60 thousand copies, cost Rs 10.56 lakhs.

The newspaper also carried another half page ad on the last page, which would have cost around Rs 7 lakh. 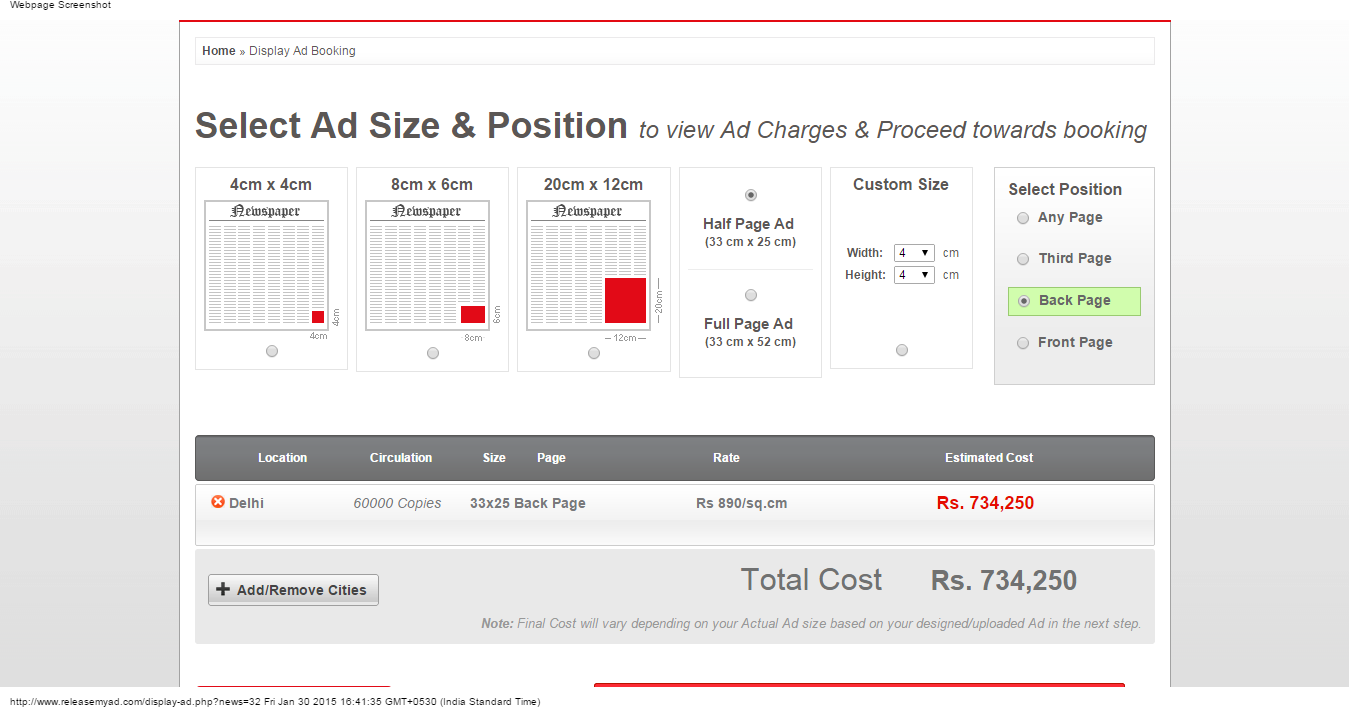 The Times of India group’s Hindi daily also carried the same advertisement in its Delhi edition on the third page on Friday. The site puts the estimated cost at over Rs 13 lakhs.

Totally, the BJP's advertising costs on one single day in Delhi editions of the newspapers is more than Rs one crore and 30 lakhs.

It's clear that the party has pretty deep pockets. It's spending for last year's election has been estimated at upwards of Rs 714 crore.

The Congress party, on the other hand, did advertise on Friday by the means of a small banner ad on the second page of The Times of India, which would have cost around Rs four lakh, according to releasemyad.com. 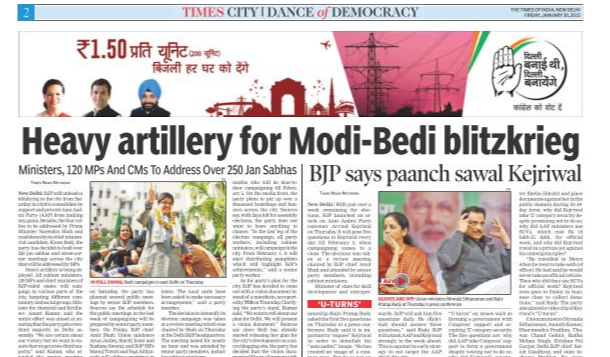 The Aam Aadmi Party is also advertising on posters stuck on the back of auto-rickshaws plying in the capital and hoardings in strategic localities.

AAP volunteers can also be seen campaigning with placards and hand-made banners around the capital, mostly around hoardings that feature promotional material of BJP or Congress.