Contribute Now
Ad
Some of the finest Indian writing in English today is from poets in general – and women poets in particular. Each of six contemporary women poets presents one of their newest poems in observance of Women's Day.

on sensing & honoring the waters
by Monica Mody

solace curls on a rock
& sleeps

drops, tell us of grief!

healing what must be healed
old wounds slip
like smitten moons into
waters, half-moons

won’t you
o won’t you
sing of the waters? 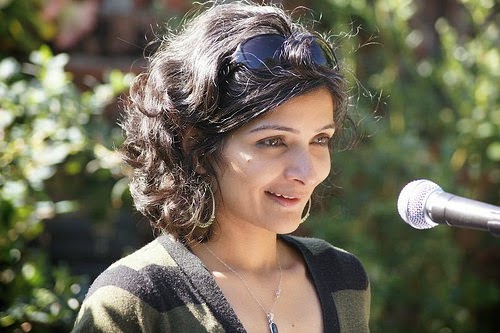 Monica Mody is the author of Kala Pani (1913 Press) and three chapbooks of poetry and cross-genre experiments.

Arjuna, I send you the son you’ve never seen:
our son, yes, your firstborn, Aravan. It will mean
nothing to you, his gentle name, I know. Nor mine,
perhaps – Ulupi, daughter of Kouravya, Queen

of the Naga. For names seldom count. To refine
your vision, recall Devprayag, the river shrine –
Ganga’s cradle – you’d visited in your first golden
year of exile. Recall the naiad who’d entwined

her pulse and breath with your own, plunging nine frozen
leagues down – down, with you in her arms, your heart molten
with wonder, limbs cursives of sudden, mute delight –
to the netherworld, shimmering, aqueous glen

of the serpent kings, and frontier of heaven’s might.
Recall how you had gazed, in the nacreous light,
at her speed, her allure, then begged to gain the same
mystic skills – to wage war underseas, to ignite

oceans with a single spell. Remembrance reclaims
you now, and oblivion blossoms into shame.
For though men of Kuru enjoy a history
of forgetting wives and lovers, to disclaim

a tutor – as I, who granted you victory
over seven worlds below earth – bodes misery,
moral ruin in your mind. But it scarce matters:
I’ve hardly pined that you expunged from memory

the mirrored blaze of my thighs and lips, or attar
from my rose! That night meant a quick, luscious patter
in both loins, nothing more – a night I had acquired
in return for the runes you needed to shatter

rival armies: your seed my teacher’s fee, the fire
to forge my child. For it was not burning desire
that impelled my barter for coitus, you see,
but my clan’s need for fresh warrior stock to sire

the next monarch. Yet our Elders first reproached me
for choosing an earthling, Indra’s son and demi-
divine though you were; worse, Aravan had to face
down, when young and unknowing, the ignominy

of words like half-breed and mutt, for the human race
stays second-rate among serpents. But he embraced,
to our surprise, his father’s blood with fiercer pride
in response, rising so tall and true that Disgrace –

who’d dogged his tread through childhood – fell by the wayside
and never caught up again. Staunchly has he tried
to be worthy of you. But more than the echo
of his sire – so much more – is this son who bestrides

seven spheres as numen, the camber of his bow
shaping earth’s vault while his smile ushers tomorrow.
He is what matters, Prince: Aravan, beyond wrong
or crown; the future, which is not ours to forgo.

I knew it would kill, I knew the ache to belong
would send him here, to this crazed, dissonant swansong
of war – for sons will slash their lifelines for distant
fathers, to please kin who’ve disdained them all along

while mothers and lovers and life, in an instant,
are forsaken for combat, for the swift, brilliant
death or painless triumph they believe lies ahead.
Neither – they will find, alas – proves to be constant.

I’d graft Aravan to the ocean floor, embed
my son within deep murmurs of my heart, or spread
him amongst the farthest stars to keep him from harm,
if I could – but moths seek the flaming braided thread

for death, even when unlit. Wherein lie fire’s charms,
Arjuna, what makes them yearn to drown in its arms?
I’ve mulled on that for long. I know what this portends,
but goddesses cannot mourn, nor raise an alarm.

I do not ask you to love him, nor to pretend.
Who can love on demand, even to make amends,
even one’s own blood? And Aravan deserves more,
as soldier, as being: I ask that you extend

to my son the courtesy, the care you’d outpour
on an ally; the candour you’d unveil before
equals. Do hold his filial trust unbetrayed,
even the day you’ll deflect his lifeblood, his core

to raze the foe, when war spreads from earth to invade
the skies, when the end crawls up, and its breath abrades
your spine. Grant him his lineage, complete with sheen:
watch him stroll towards death, his pulse the serenade.

(This poem is from Karthika Naïr's forthcoming collection, Until the Lions, a reworking of the Mahabharata in multiple voices [HarperCollins India/Arc Publications, UK] ) 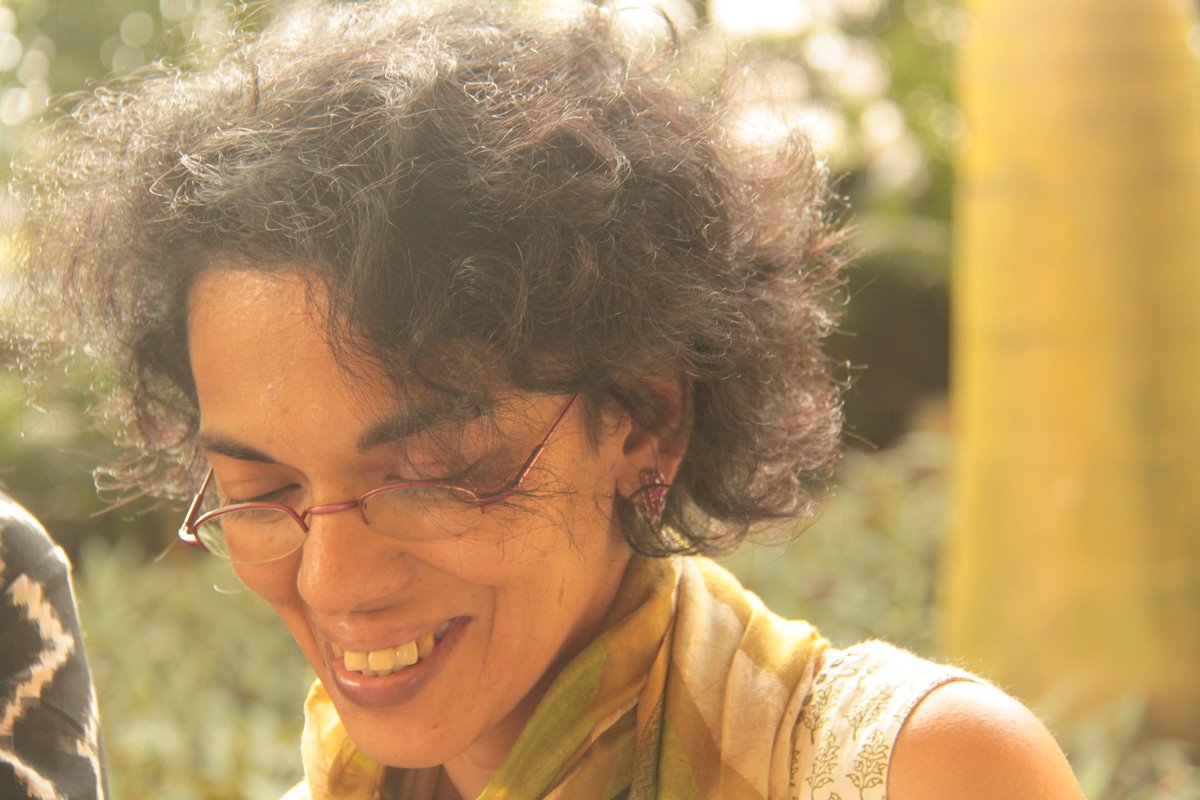 We never tire because we are born as women.
Our outcries shall rise to the height of the lighthouse.
We have reached its orbit of swirling light
as it measures the breadth of the sea.
As past tradition encountered the future,
we became the waves, crashing against the shore,
clashing and weeping.
Our wombs within us, where embryos grow,
speak out from the million years of the seas fullness,
pleading that our bodies should not be harmed....
by the fallout from this nuclear reactor.
From these, our wombs, carrying the loneliness of the sea,
we sang of liberty, we bore our children,
we enjoyed our men,
we never suffered want or even a small wrong.
The sea became our bodies.
We shall never tire, for we are born as women.
We raised up the sun and the wind
from our very selves;
we poured into the night
the stars that bloomed on their banners.
We drank our tears as if they were the ocean,
The salt crests became our swelling breasts.
We shall never tire because we are born as women.

(For the women protesting in front of the Nuclear Reactor in Koodankulam, on the TamilNadu coast.)

Kutti Revathi is a lyricist, poet, activist and doctor. She has published three books of poetry and is the editor of Panikkudam, a literary quarterly for women’s writing.

I tell you I no longer touch liquor in a way that I know explains nothing.
You linger, ask me about music, the meaning of a word.
Over your shoulder, the afternoon spills
across the laterite bricks like an embarrassed laugh and we both
turn to look at her, rosy cheeks, the way she holds herself, how
it’s clear she still knows only to seduce with ridicule. I take her in

and I know: she has never been alone on the day of a lover’s wedding,
never been the subject of verse or controversy, never stepped out of
a dress knowing a woman can wear a war for a very long time.

Come and play, she says, and although she is asking you, I think not anymore.
The frangipani in the courtyard stirs.
She throws a ball; you catch it. I decide I envy her
nothing, not even how little she thinks she can lose

but by the time you turn back, my feet are already in their sandals.
You watch me leave. At the doorway I turn and say –
you don’t need to understand Cesaria Evora to know

a saudade is the semaphore of a woman who would forgive you
if you ignored her mouth
provided you kissed her shoulders.

I’ll be the beautiful woman in the other room playing with a
Great Dane, malachite around my throat, my bare arms
shimmering and sweet-scented, knowing you before you
arrive by the way the light changes in the doorway behind me, 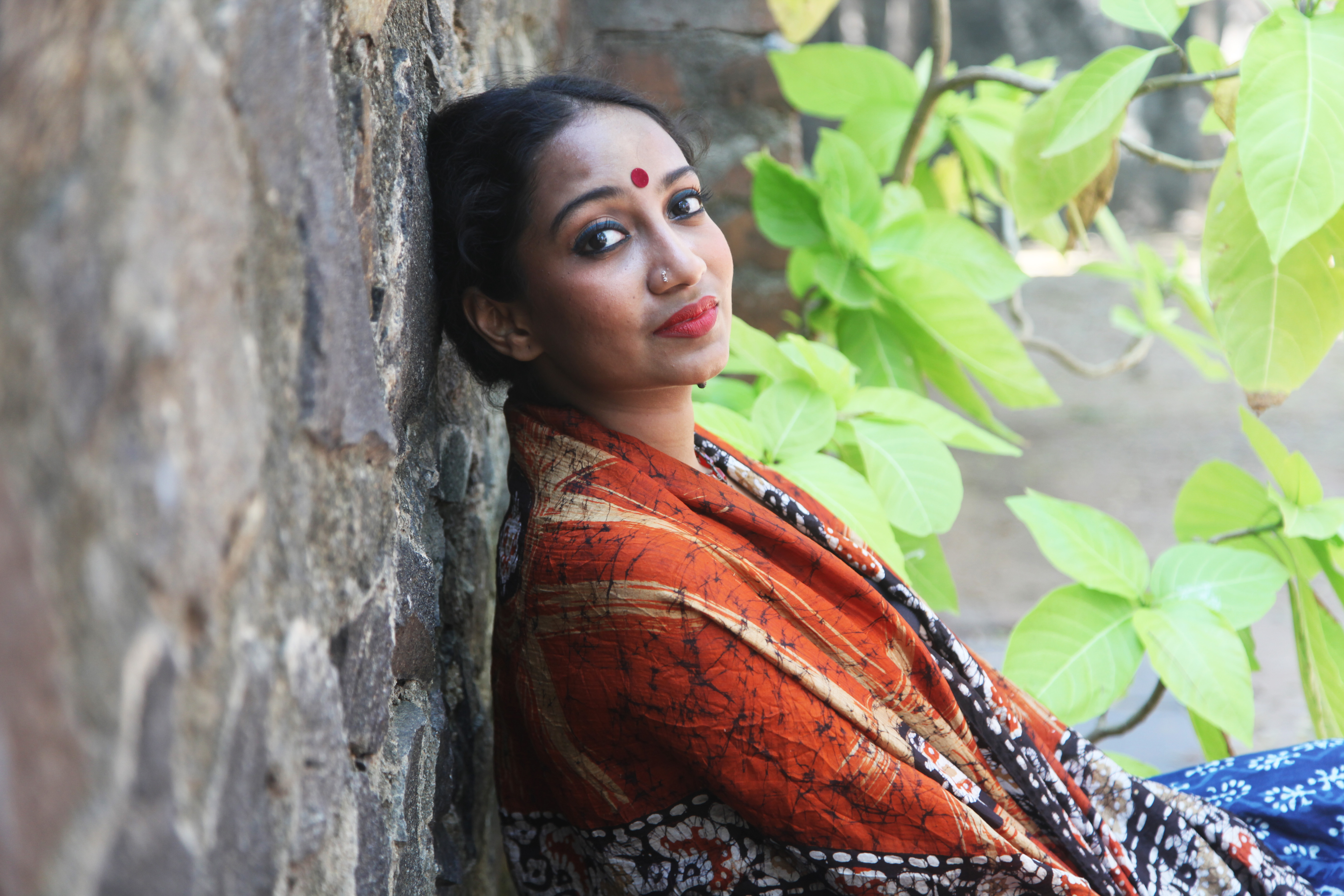 Sharanya Manivannan's first book of poems, Witchcraft, was described in The Straits Times, Singapore, as “sensuous and spiritual, delicate and dangerous and as full as the moon reflected in a knife”. She has been commissioned to write and perform a poem at the 2015 Commonwealth Day Observance at Westminster Abbey, London on March 9. She lives in Chennai.

Montage on Love
by Sridala Swami

When he leaves, she is condensed by shock until, like a seed, she becomes the original of herself.
*
For her it was hard to be in love again. It put her under serious pleasure.
*
He was irresistible as only the very young of any species are programmed to be. He played enthusiasm like an extreme sport.
*
No, he did not play. He imagined. The two things are different only because of outcomes.
*
Somewhere outside this paradise (which is, after all, nothing but an enclosed garden) are places where outcomes are not surrounded by walls. She wonders what to call the things that are placed in paradise.
*
She considers inoculating herself against future shock by administering small, daily doses of loss. Against her better judgement, she finds she has become a hoarder.
*
He also was a hoarder but a stealthier one. What he hoarded and where he stored it are enduring secrets.
*
It was always difficult to say they. It is a word that did not come easily to either of their tongues.
*
But that is not why she left. [Why he left]. That was an act of superb, of beautiful disentanglement.
*
She condenses. He deliquesces. Incoherence and silence are not the same thing. Hoarding and holding are not the same thing. 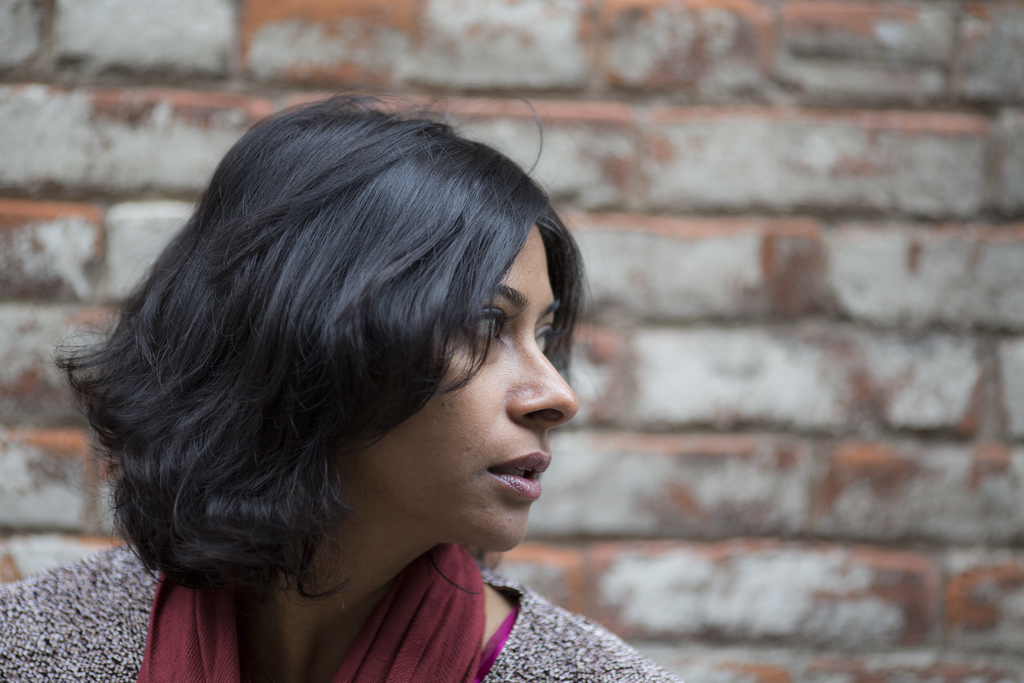 Sridala Swami is the author of two collections of poetry, the most recent being Escape Artist, published by the Aleph Book Co. in 2014. Swami writes a column on poetry called The Sideways Door, for The Daily O.

On my birth
“Earlier I was never keen to have a girl but
When your mother went in labor
I imagined a tiny lump of clay and sighed for
It felt good. I think I wanted a girl then and there
To keep my head from wobbling out soon.”

On my puberty (that I hoped, alas, was a secret to him)
“You’re grown up now I think although
I got nothing much to say of weight
Fathers, I was taught, don’t say much here
We can talk about news, nasty little boys,
Also changing car tires in between rhymes…
I’ll try to explain flowers before the seeds.”

On Nirmalprabha Bordoloi’s comment on my poetry
“She loved your metaphor
Of a copper-colored sky and
I see why. She’s a poet of strides
Herself who sees flowers
As baskets or even spawns’ mouths.
At times she also sees time as cats
The way they flee showing only their tails.”

On the road to Shillong
“We’ll stop the car at Nongpoh. Buy
Pineapples of the golden hills,
Your mother and I will have tea
From coal-fired stoves. You
And brother can watch the spring
But no standing on the edge.
The hill road has pebbles that fall
At a slight little nudge, and then
You don’t want to lose that great view.”

On my secret forays into his library
“I know you read Madame Bovary
Recently, and I saw the Kama Sutra
With the ears of a shy puppy dog.
You’re ten? Or twelve? Your mother
Might know, but if you asked
Me about those men and women, the flesh
Gave them posterity as did their dreams”

On what the feminine meant to him
"Sure, it’s about a waist that
The gooseberry tree envies
A woman is the one with a neck
Of curling grace and hands
That can charm and still all voices
High breasts but even a higher
Forehead. Someone you’d not
Measure against any man."

On reading my political short story
"Curious why you wrote that character
As though he was I, or so many like me –
Not a Stalinist but a hardnosed old-timer.
Did he love a dog? Perhaps you should put that in." 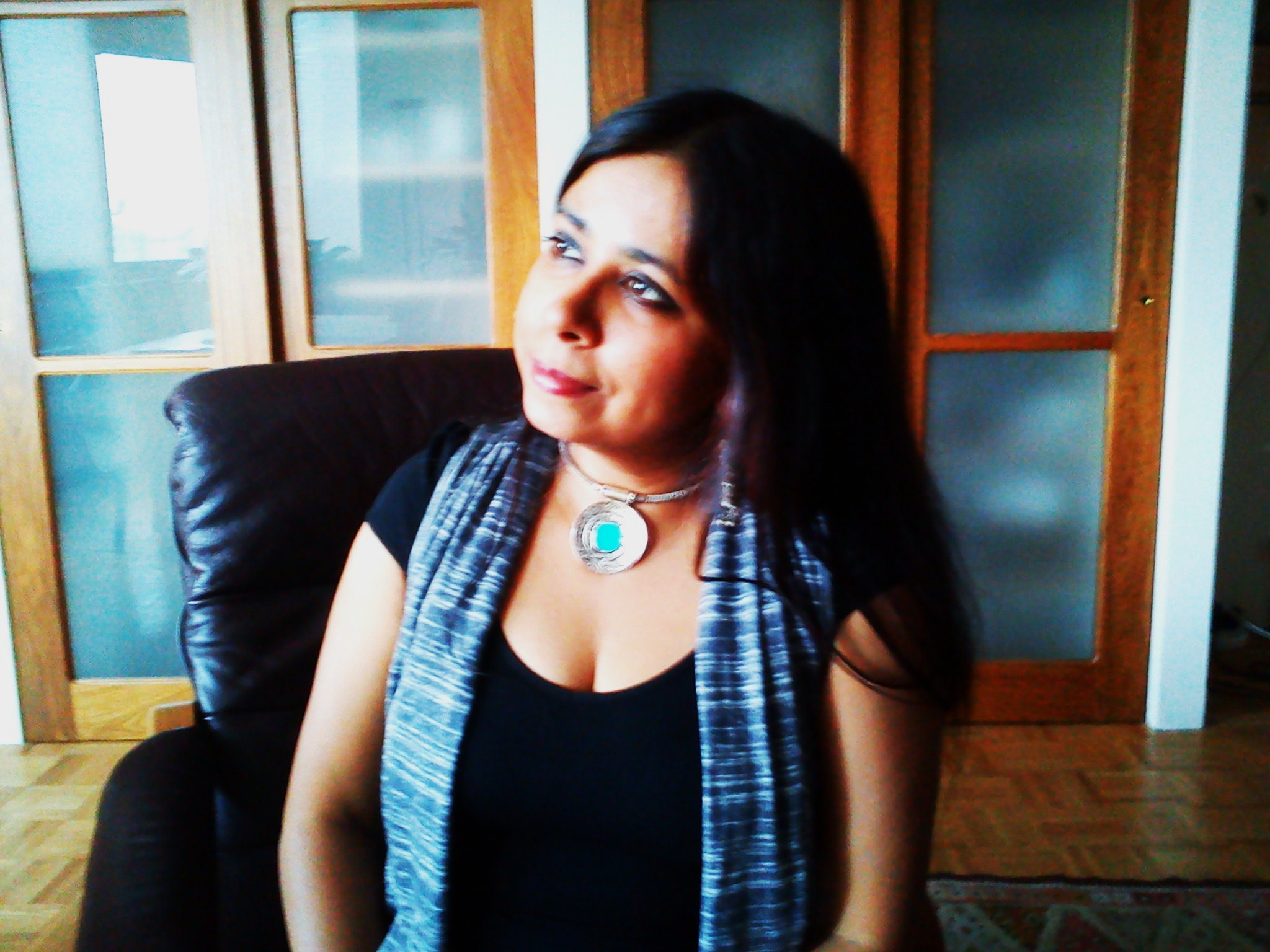 Nabina Das is a Guwahati-born poet and writer currently based in Hyderabad. She likes to think of herself as ginger root.