Contribute Now
Ad
After reaching a historically low ranking of 173, the Indian national football team has leaped 26 places to move up to the 147th spot in the latest Fédération Internationale de Football Association rankings released on April 9.

The leap is because India, under new coach Stephen Constantine, defeated Nepal 2-0 in the home leg and drew the away match 0-0 to advance to the second round of qualifiers for the upcoming 2018 FIFA World Cup and 2019 AFC Cup respectively.

If India had beaten Nepal away from home, they would have been even higher up in the rankings.

But India is not alone on the dramatic rise front. Bhutan, having recorded their first two World Cup qualifying wins beating Sri Lanka, made a massive leap of 46 places to be ranked at 163 in the world. Prior to this, Bhutan were the worst ranked team in the world.

The Blue Tigers, as the football team is known, only played two matches last year. The first was a 2-2 draw at home to Bangladesh in March, ranking 11 positions higher than India at that time. The other match was a 2-3 loss to Palestine in October, ranking 51 positions higher.

A year ago, the Blue Tigers were ranked 147th in the world. They are back to the same ranking again. You may ask how that happened. The answer is simple. 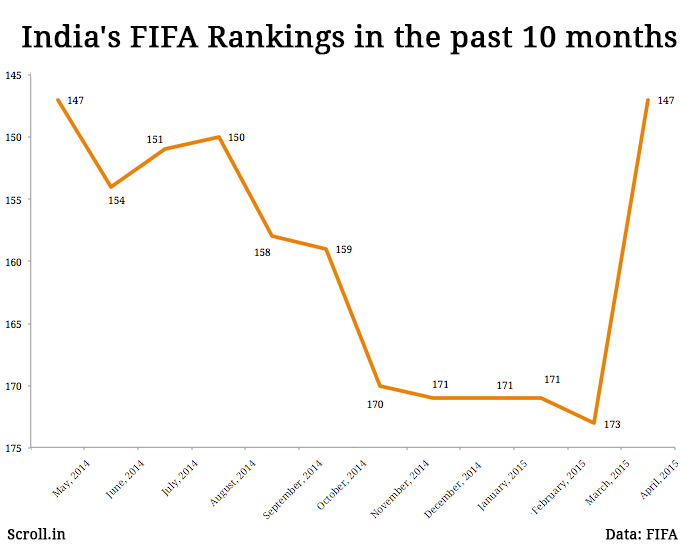 By winning one match and progressing on aggregate over two-legs, the team has garnered enough points to eliminate all the wrongdoings of the last year. In addition to this, by advancing to the second round, India are guaranteed to play 10 more matches – eight this year and two next year – albeit most of them against higher ranked teams.

If India go on to win some of those matches, they would make an even bigger march up the rankings. The draw for the second round takes place on April 15.

Last month though, India had fallen to a historically low ranking of 173. This was because it wasn’t playing any international matches, while others were. The Indian team was facing trouble and despite the excitement over the Indian Super League – a franchise based league that had its inaugural season last year – the Indian team kept trending downwards.

Looking at the rankings since the turn of the century – except for a blip here and there – India has largely remained above its neighbours. 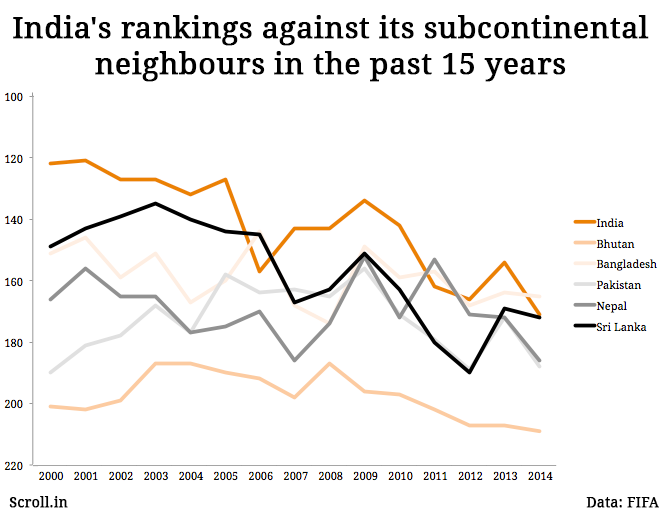 These are average FIFA rankings for each year and does not include 2015.

With more money being put into football and with India hosting the Under-17 World Cup in 2017, one can hope to see India rise up on the FIFA rankings in the coming months.

With India already qualifying for the 2017 U-17 World Cup by virtue of being the host, there is need for grass-roots development and more matches for the youth team. The Indian Super League was the fourth most attended football league in the world, taking average attendances.  As football gets played by more and more children, one can hope that India will not repeat its mistakes of 2014.