Contribute Subscribe
Ad
A solitary neem tree stood outside a modest mud-and-stone house on a barren patch of land. Sitting on a charpoy under the tree, his arms and legs splayed, was 14-year-old Harender.

Burnt skin stretched from the fingers of his left hand, all the way to his left temple, stopping short of his eye.

"Thank god the eye was spared," said his mother, Phuli, who hovered over him.

On February 18, as on most other nights, Harender, along with his father and grandmother, went to sleep in the small hut that the family had built in the fields that they cultivated, about a kilometre away from their home in the village of Baswaani in Rajasthan’s Nagaur district.

Past midnight, the family woke to an inferno.

Before the flames could consume his child, Babulal Meghwal, Harender’s father, managed to drag him out. But he could not save his old mother. Charred by the fire, 80-year-old Udao died on the way to the hospital.

A week after he had cremated his mother and admitted his child to the hospital, Babulal sat down on protest outside the collector’s office.

The Dalit farmer alleged that the fire was not an accident but an attack on his family, an attempt to oust them from the land they have tilled for three generations. Identifying the attackers as five men of the Raika community, also known as Rabari or Dewasi, a middle caste that traditionally reared camels and sheep, he declared that he would not abandon his dharna until the police had arrested them.

Two rounds of police investigations have found prima facie evidence to support Babulal’s accusations. But no arrests have taken place in the case so far.

The protest comes at a time when Dalit groups around the country are preparing to celebrate Babasaheb Ambedkar’s 125th birth anniversary on Tuesday. In Nagaur, the Dalit activists sitting on the dharna with Babulal are simultaneously printing invitations for a programme to be held in the town.

So what is Babulal’s story and what does it tell us about the lives and politics of Dalits? 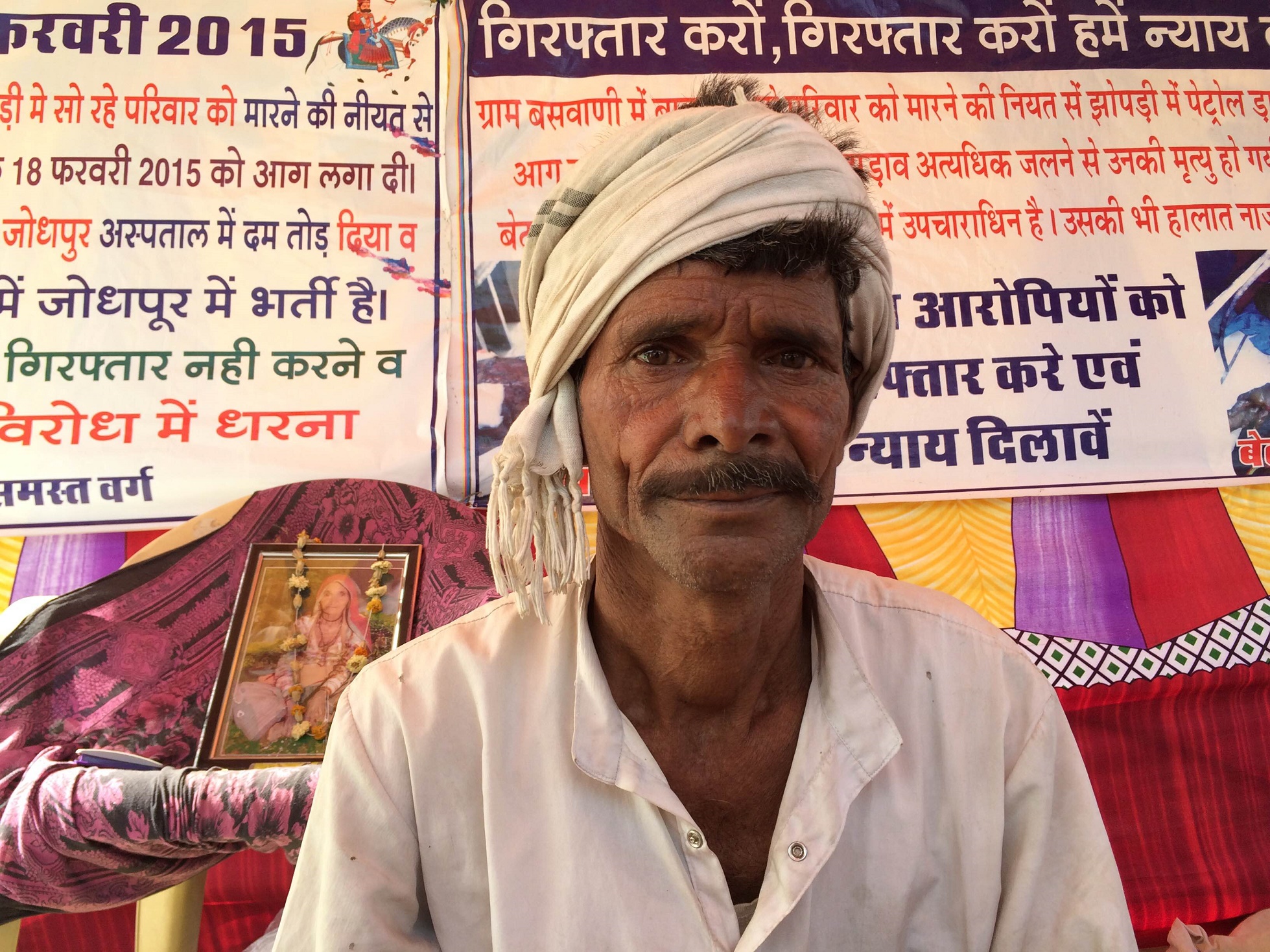 Babulal has been sitting on the dharna since February 27.

Babulal grows jowar, bajra and other millets on about 20 bighas of unirrigated land that he claims his family has cultivated for three generations.

Until 2013, he thought the land belonged to the government. But he fancied owning it one day. According to the Rajasthan Land Revenue (Allotment for Agricultural Purposes) Rules of 1970, the government's surplus revenue land can be transferred to landless farmers or those who are cultivating it, provided they do not have agricultural land beyond a stipulated limit. This makes Babulal the natural claimant of the farmland.

But in September 2013, he got a rude shock when another farmer, Sagtaram Dewasi, who held six bighas of land adjoining Babulal's fields, asked him to vacate six of his 20 bighas, claiming that the government had transferred ownership of that portion of the land to his family.

Borrowing money from his relatives, Babulal found a lawyer in the district town and filed a case in the tehsildar’s office. In the course of the litigation, which has now reached the collector’s office, he discovered that the six bighas of land had been transferred in favour of the Dewasi family as long ago as 1984.

Challenging the allocation, Babulal produced receipts to show that he had been paying fines for the land – like all people considered encroachers on government land, he had been served notices and was being penalised for occupying it. Scroll has seen a receipt dated 1990. A letter of the revenue department issued on April 9, 2015, states that the Meghwal family has had continuous possession of the land since 1974.

How did the Dewasi family manage to transfer the land in their name?

“Allocation of surplus government land is done on the recommendation of an advisory committee,” said Kalu Ram, the additional deputy collector of Nagaur. The committee is made up of the sub-divisional magistrate, the MLA of the area, the sarpanch, the pradhan, and two nominated members, one belonging to the scheduled castes and tribes. The committee calls for applications from the landless and the so-called encroachers who want to legalise their occupation. “It might be the case that Babulal’s family remained in the dark when surplus land was being allotted in the village,” said the deputy collector.

Dalit activists said this was often the case. “Sometimes even the land that has been transferred to Dalits eventually comes to occupied by dabang [powerful] castes,” said Shivnarayan Meghwal, district head of the Bahujan Sangarsh Dal. 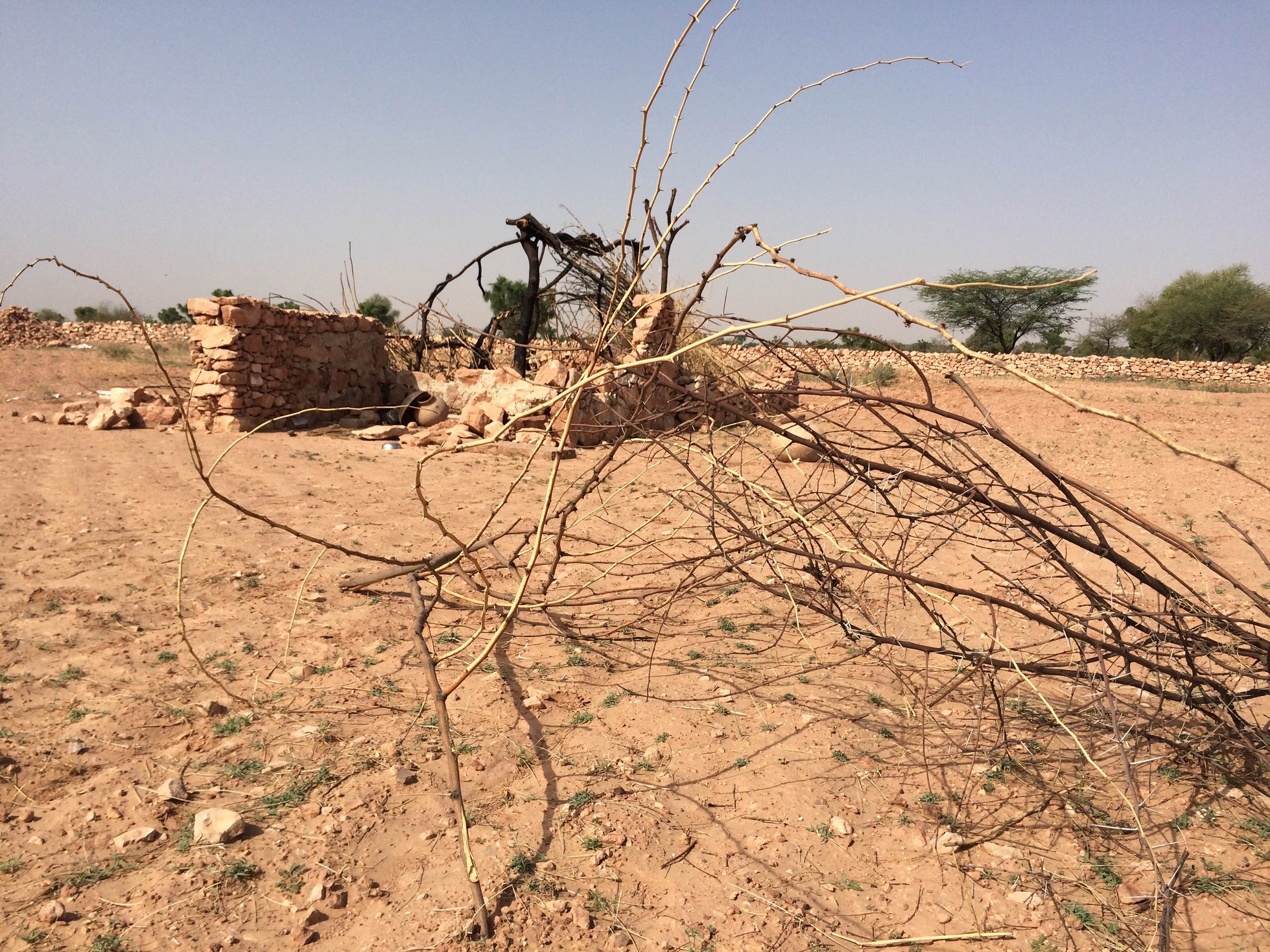 The burnt hut from which Babulal and his son escaped.

In Baswaani, the disputed land lies fallow. The makeshift hut, built by Babulal to safeguard his property after the dispute began, stands razed to the ground. The only objects that have survived the blaze are the metal utensils.

At the dharna, the Dalit farmer had described what he had seen that night: “Feeling the heat, when I woke up, I saw five men standing at the door, blocking it. Since I could not use the door to escape, I knocked down the side wall made of sticks. As soon as they saw I had survived, they ran away.”

The five men, he said, were Anaram, Chelaram, Aaidanram, Shaktaram, and Dongurram. Four belonged to the Dewasi family that was locked in the dispute with him over the land.

Babulal filed a complaint with the police within hours. But he alleges that the police delayed action to allow the Dewasi family to escape.

The police deny these charges. “How could we have arrested the accused without gathering more evidence?” said Raghavendra, Nagaur’s superintendent of police. “Babulal was constantly changing his statements under the influence of other people, including politicians. We needed to speak with the young boy who was in Jodhpur hospital and who was not in a condition to talk for several days.”

Eventually, in his statement to the police, the boy partially corroborated his father’s testimony. He said he saw two men escape on a motorcycle. They were among the five people his father had named.

But before the district police could proceed with the arrests, the case file was transferred to the Inspector General’s office in Ajmer, the division of which Nagaur is a part. “Cases are often transferred and reviewed,” said the police superintendent. "It could happen when either of the parties [the complainant and the accused] are not satisfied with the investigation." But wasn’t it unusual for a case to be transferred at such an early stage of the investigation? “You are right,” he said. Who asked for the transfer? “I have no clue...”

Babulal said he did not ask for the transfer. In fact, he believes the transfer was a tactic to delay the arrests and shield the accused.

As for the families of the accused, they could not be reached. All three brothers and their families have locked up their homes and left. 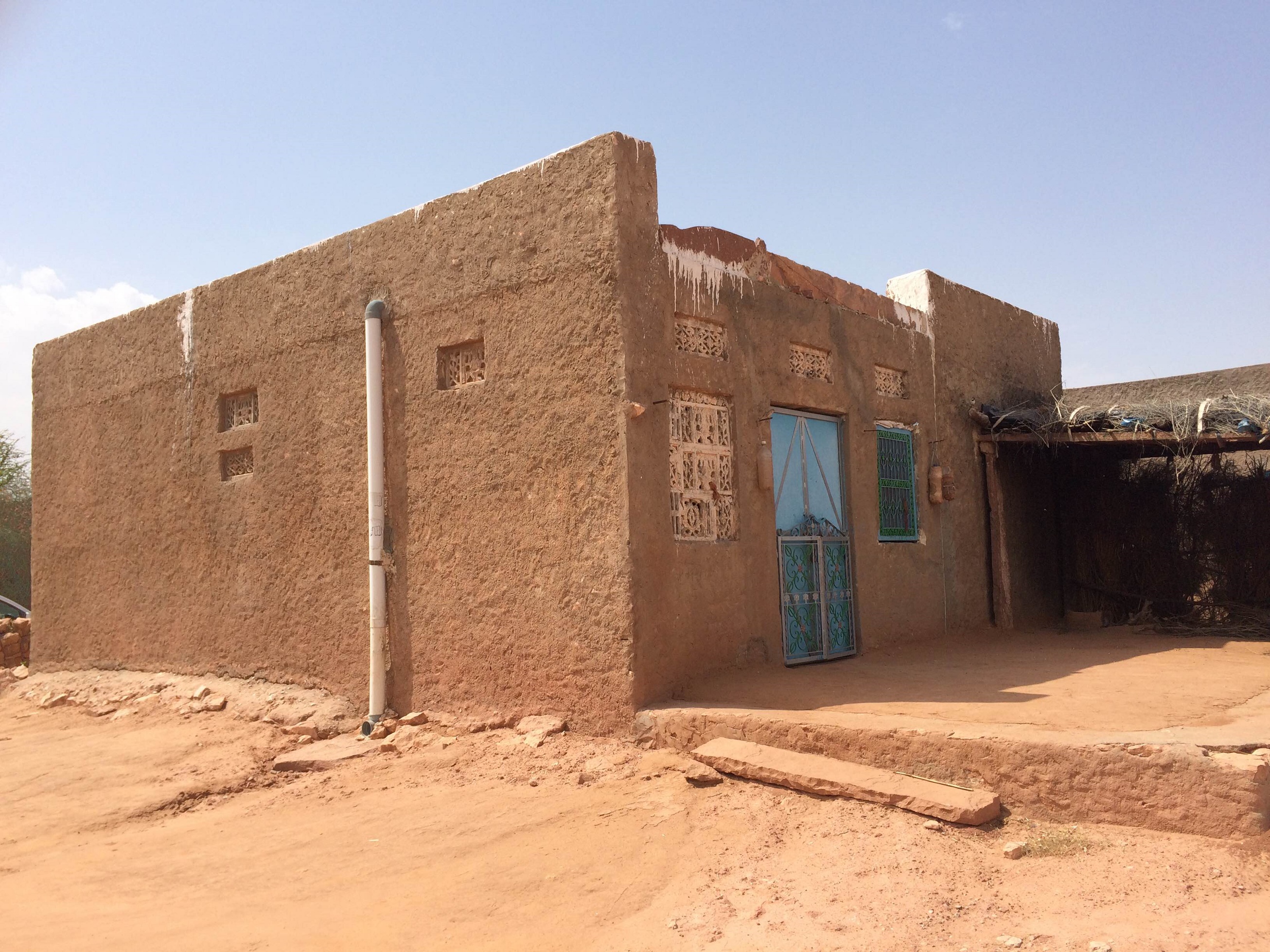 One of the locked up homes of the Dewasi family in Baswaani.

The Meghwal community sees the hand of Otaram Dewasi in the slow progress of the case. Otaram, who is referred to as Bhopaji, is the religious head of the Raika community. Elected as an MLA from Sirohi, he is a powerful member of the Vasudhara Raje led-Bharatiya Janata Party government in Rajasthan, and recently made news when he became India's first guapalan mantri (minister in-charge of cow affairs). “Vasundhara fears his magical powers,” said Bansi Lal, an old man, provoking laughter among his fellow protestors at the site of the dharna in Nagaur.

Bhajan Singh, a former government employee, a Meghwal from the Sikh community, said, “Otaram is extremely wealthy and Raje thinks he can shepherd all the votes of his castemen to her party.”

But Otaram is the sole MLA among the Raikas. In contrast, according to the count by the protestors, the Meghwal community has 17 MLAs. Even the Modi cabinet at the Centre features a leader from the community, Nihal Chand Meghwal.

Why then is their case so poorly represented? “Our MLAs are afraid they will lose their tickets if they speak up,” said Ramprasad Luniya, a middle-aged school teacher. “They are still puppets of their parties.”

The Meghwal community is the largest and the most empowered among Rajasthan’s Dalits. “It is true that our education and economic condition has improved tremendously, but that is also why there is a backlash against us,” said Shravan Meghwanshi, a social worker. “Other castes fear we will get ahead of them. If you look at the cases of atrocities against Dalits in Rajasthan, an overwhelming number are against Meghwals.”

Rajasthan has the country's highest number of atrocities reported against scheduled castes – 8,126 cases in 2013. (Uttar Pradesh was next, with 7,103 cases.)

“We need people like Kanshi Ram who work in a mission mode,” said Shiv Narayan Meghwal of the Bahujan Sangarsh Dal. “Even Mayawati for that matter has flopped. Wo to bik gayi. She compromised with the same people she once opposed. The hard reality is that you need money to contest elections, and money is still in the hands of other communities.” 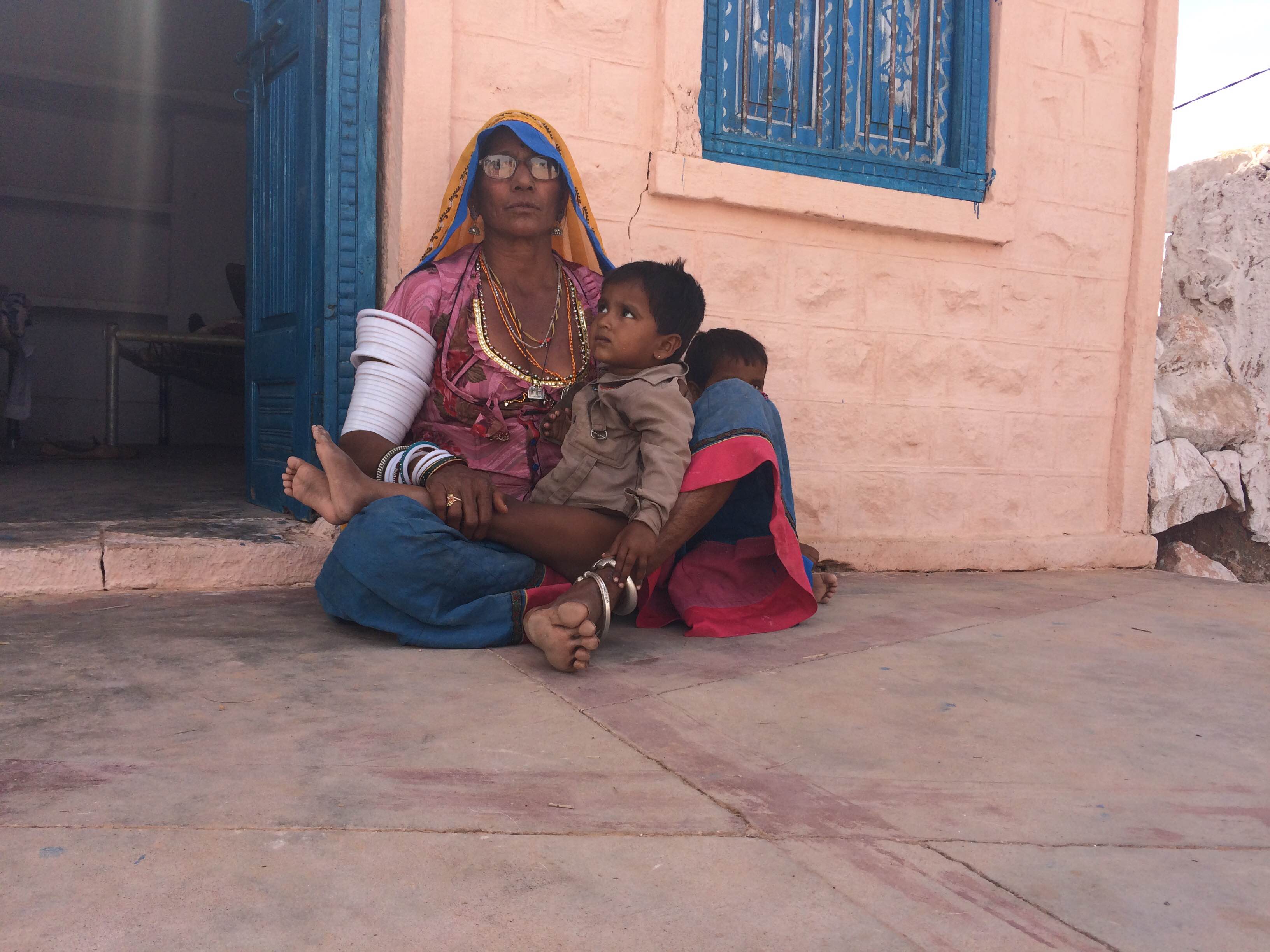 Old woman in the Raika quarter of the village.

In the Raika quarter of the village, no one wanted to comment on the case. The homes in the neighbourhood look modest in comparison with Jat residences, but lavish in contrast to those of the Dalits.

“They are more prosperous than you might think,” said Shravan Meghwanshi. “Their herds of sheep are worth lakhs of rupees. There is an old saying 'Jat jawai bhanja raika aur sunar, inse karke dekho vyavahar.'” A Jat, son-in-law, sister’s son, a Raika, a goldsmith, you’ll know them once you deal with them.

But the residents of the Raika quarter said they have largely abandoned sheep rearing. Grazing lands have shrunk. “People abuse us when they see us with our herds,” said Jagdish Dewasi. “They say, why are you bringing your mother here?”

The ecological and economic changes had made the nomadic shepherds gravitate to the life of settled agriculturists. What has made land ownership even more attractive is the rise in the prices of farmland, particularly in the pockets that have limestone deposits. Fifteen kilometres from Baswaani, villagers said, the price of land had risen from Rs 10,000 per bigha to Rs 10 lakhs. Forty kilometres away, where a cement factory was coming up, they claimed, it had hit the roof, crossing Rs one crore per bigha.

As the value of land rises, so does social contestation. Dalit farmers are the first to feel the squeeze. “Everyone tries to suppress us, whether Jat or Raika,” said Shiv Narayan Meghwal.

At the motor mechanic’s shop in Baswaani village, a Jat farmer expressed sympathy for Babulal. “His family has been breaking their bones to make the land cultivable,” he said. But in the next breath, he betrayed his prejudice. “Indira Gandhi has made people cry by making the rule [that allows transfer of government land to the landless]. If that rule wasn’t there, even one bigha would not be in the possession of Dalits. Zameen hoti nahi, dokri marti nahi." If the family had no land, the old woman would not have died. 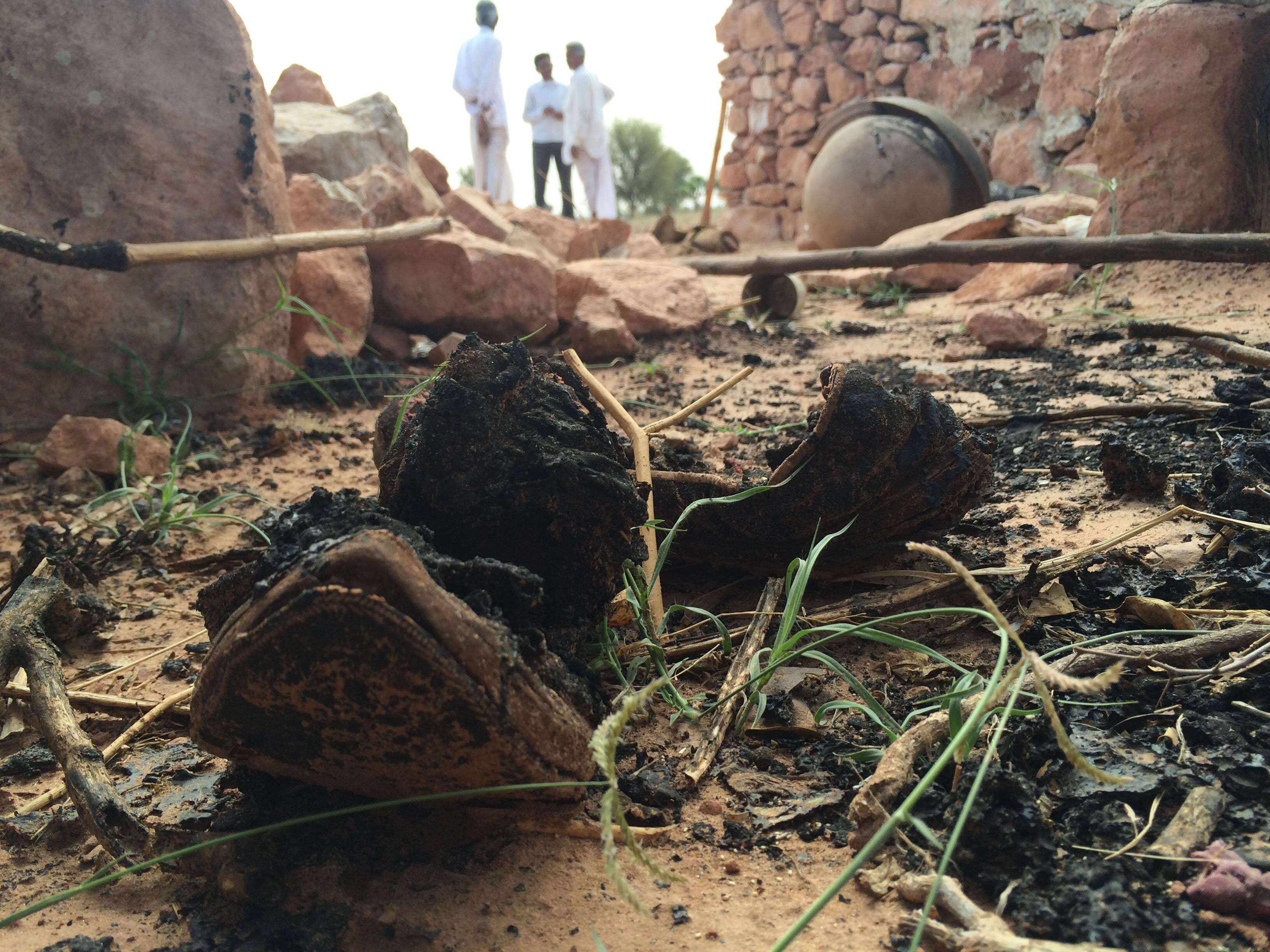 The burnt jootis of Udao, Babulal’s mother, who died in the February 19 attack.

A Travancore Tale: The graphic story of Nangeli, the woman who cut off her breasts to protest a tax