Contribute Now
Ad
Even as the Cabinet approves stricter penalties for child labor violations, granite mines in Karnataka still employ a large number of children, many under the age of 14, to complete stone processing. A report titled Rock Bottom by the Netherlands-based non-government organisations India Committee of the Netherlands and Stop Child Labour, found that minors accounted for almost 10% of the total workforce in six quarries in state’s Raichur district.

While the heavy lifting of stone cutting and machine operation are left to the men, the industry employs women and children to process waste stones. This involves crushing chunks of granite that aren’t suitable to be processed into construction slabs into grit and gravel. Children break and crush the stones with hammers and nails, sitting barefoot, with no protection against silica dust and other hazards from the mines.

The children received lower wages than the women, who themselves were not paid according to the state’s minimum wage requirements, the report said. While most workers had no written contracts, the children were even less likely to be able to claim

Child labor in Raichur’s mines has declined after the clampdown on illegal mining in the state in 2005. At that time, an Indian fact-finding team visited iron ore and granite mines in Hospet and Bellary and concluded in its report, titled Our Mining Children, that a few lakh children had been forced into illegal mining activities.

The fact-finding team found how children were paid according to how many puttus, or iron baskets, of stone they filled in a day. One puttu of about 10 kgs-15 kgs fetched Rs 5. A child could fill between six and ten in a day, depending on his energy that day.

Karnataka’s neighbour Tamil Nadu seems to have had more success in preventing children from working in its granite mines. The Rock Bottom survey found only one child below the age of 14 among the 12 quarries they visited in Krishnagiri and Dharmapuri. The under-18 workforce in Tamil Nadu’s mines was little more than 1%. 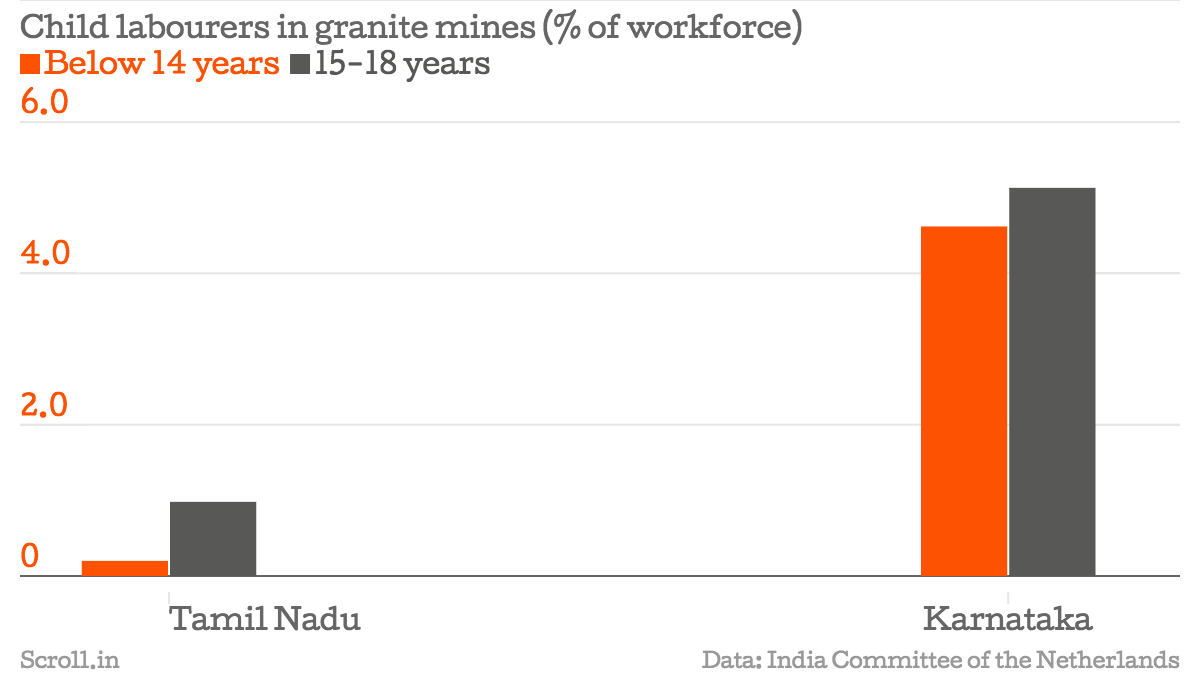 Like in Karnataka, illegal mining became a huge political issue in 2012 leading to strict monitoring of mines over the last two years. In order to avoid being hauled up for child labour violations, mine owners who employ migrant labour have asked employees not to bring their families to the mining sites.

Child labour continues not just in the mines of south India but across the country. In Rajasthan, women, children and the elderly support the efforts of the young, male breadwinner who works as a stone cutter in a mine. The rat-hole coal mines of Meghalaya which are vertical shafts, which then branch sideways, are no deeper than five feet. This means that mine owners often send in small and agile children at great risk to their life and limb.

The new amendment to the Child Labour (Protection and Regulation) Act makes child labour violations a cognisable offence. The amendment has also increases penalties with the maximum fine being raised from Rs 20,000 to Rs 50,000 and imprisonment going up to two years instead of one year. However, the amendment also allows children under 14 to be employed in family-run business and in the entertainment sector. This dilution in the original act, activists say, will promote child labour.

In Bihar, children are being employed at weddings on 11-hour shifts – because of a legal loophole