Contribute Now
Ad
Exactly 54 years ago today, Assam witnessed a bloody denouement to a longstanding campaign to protect the Bengali language and the identity of its speakers. As a crowd of unarmed protestors gathered outside the Silchar Railway Station to oppose the imposition of Assamese as the official language in the erstwhile Cachar district, the police opened fire, killing 11. For Bengalis, both Hindu and Muslim, who still form a majority in this region, it was the last straw.

They forced  the Assam government to amend the 1960 Official Language Act to give Bengali official status in the district. Though district has since been trifurcated to create two new ones – Hailakandi and Karimganj – Bengali continues to enjoy official status across the region. Despite this,  Barak Valley, as the region is known, is often gripped with tension over regular infractions of this law.

Besides quotidian problems arising from the lack of official documents in Bengali, a common anxiety is that the state will push Assamese as the official language. Ever so often, the majoritarian Assam-is-only-for-Assamese idea kicks in too. A longstanding demand to rename the Silchar Railway Station as Bhasha Shahid Station, for instance, continues to be stuck in a bureaucratic labyrinth between Dispur and New Delhi (even though an unofficial signboard with this name has been put up). Even the report of the Justice Gopal Mehrotra Commission, formed to ascertain the exact cause for the police firing, continues to kept under wraps.

Though 1961 marked a significant victory, Unishey May passes each year without most Indians getting a whiff of the annual May 19 commemorations by Bengali socio-cultural organisations in Barak Valley.

By contrast, a similar episode in Bangladesh going back to Ekushey February (February 21) in 1952 has gone on to attain hallowed status in the country. It is the day when protestors in Dhaka opposing the imposition of Urdu as the official language in what was then East Pakistan were gunned down. Bangladeshis view this as a key turning point in their independence struggle. The day is even celebrated internationally as International Mother Language Day.

Popularising Unishey May would serve as a recurring rebuttal to India's institutionalised "one state-one language" structure. It needs to remind us of the linguistic diversity that exists at the margins of this model and of the need to protect the languages and the cultures that are built around them. For instance, the 2013 People's Linguistic Survey of India showed that Assam was home to 52 languages – close to half of the 122 languages the 2001 Census recorded for the entire country.

There is, of course, the irony that Bengali speakers have not been considerate to linguistic minorities in areas where they form the majority. For example, Santhali, despite having more than three million speakers, was granted official recognition in West Bengal only in December 2012. This placatory move came nine years after the language was accorded an official status under the Eighth Schedule of the Constitution. Despite that, Santhali speakers in West Bengal continue to agitate to put in place measures that are their right and have been promised to them at different stages. The Santhali-medium schools promised by Chief Minister Mamata Banerjee on a landmark visit to Maoist-affected Jangalmahal in July 2011 remain undelivered even now.

What good does it do to the memory of those who died fighting for our language if we continue to perpetuate the same violence against other speakers of other languages? It is a question Bengalis, indeed all Indians, need to ask themselves honestly every year on Unishey May. 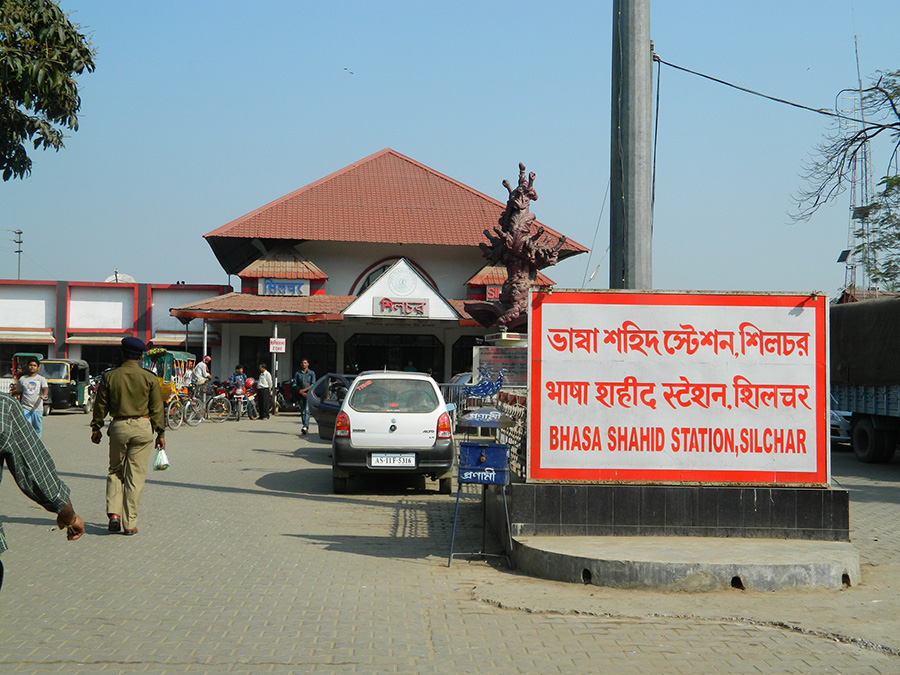 An unofficial signboard comemmorates the May 19 killings at Silchar railway station.

Debarshi Dasgupta is a freelance writer from New Delhi.