Become a Member
Ad
On Tuesday, Mumbai’s Mid-Day newspaper carried India’s first gay matrimonial advertisement. The ad was placed by Padma Iyer, who was apparently keen to see her son, Harrish, settle down.

While the initiative (and the copy) for the ad was Padma Iyer’s, her son, a high-profile Lesbian, Gay, Bisexual and Transgender rights activist, decided to publicise the initiative when it was turned down by DNA on legal grounds, Buzzfeed India reported. The Times of India and The Hindustan Times also refused to print the notice.

Over the last 24 hours, the ad has been celebrated on Facebook and Twitter users as a major step forward by the mainstream media in acknowledging LGBT relationships, with Padma Iyer being hailed as a role model. Both facts are true. However, more importantly, this series of rejections really highlights the prejudicial understanding of the controversial section 377 of the Indian Penal Code.  As Harrish Iyer put it in a Facebook post:

“If they read the splendid work done by their editorial staff they would have realised that being gay is and has never been illegal. Illegal is sex against the order of nature (non-procreatory sex) under which even heterosexuals who put their penis in any oriface other than the vagina (even mouth or creating an artificial oriface with palm) is illegal.And technically gay marriages don’t have legal sanction but they are not a criminal offence. I explained. They didn’t listen.”

The truth of the matter is that the only thing that the sales and advertising teams of these newspapers were risking was their readership, not a legal infraction. Still. if the back story of the ad helps people understand how section 377  applies to everyone, yet is often misused to target sexual minorities, it’s definitely worth recounting.

However, it's difficult to overlook a contradiction in the ad: “Caste no bar (Though IYER preferred).” 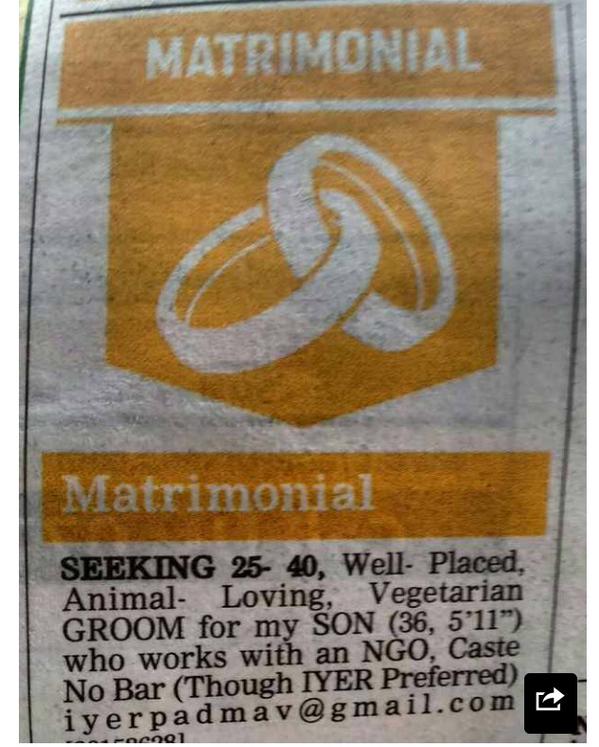 Sure, we’re all too familiar with the various categories of skin complexion, caste groupings, educational levels and more that are contained in most matrimonial ads. Of course, caste is a reality of our society and Padma Iyer suggested in her Facebook post that it can apply to all sections, privileged or not. 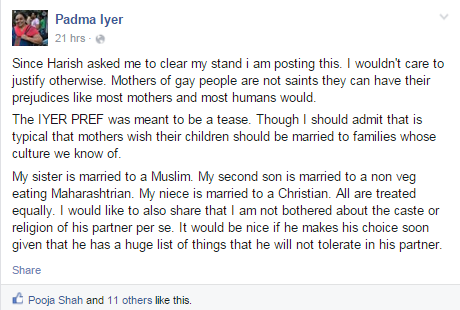 However, caste is also a reality that we acknowledge approvingly as a mechanism that facilitates choice when it suits us and denounce when it might be a little less convenient, say when it comes to reservations for marginal groups in education and employment that seem to deprive upper-caste groups of places in institutions.

Despite Harrish Iyer’s suggestion that the mention of caste in the ad detracts from the debate at hand, it’s still a contentious issue. First, the equality movement has already lost the plot if it is going to be geared towards uncritically accepting an institution that has a history of subjugation, segregation, violence and collective denial. Even if it was indeed true that the mention of caste was just a tease, the satire seemed misplaced in the context of seeking an alliance in the matrimonial pages of a newspaper. Perhaps, Faking News could have served that purpose more effectively.

The LGBTQI movement cannot ignore the fact that class and caste structures are among the reasons it faces discrimination. These factors explain by the transgender community has been classified by the Supreme Court as a constitutent of the Other Backward Classes, for instance, and is underrepresented in key positions of decision making in our society. Shedding caste prejudices could unite even more underprivileged factions within the rights movement in India.

Harrish Iyer is entitled to whatsoever preferences he may have but let’s not deny the implications that these may carry.

Makepeace Sithlou writes on rights and minorities. Follow her at @makeysitlhou.