Contribute Now
Ad
In what has been termed the first taint of scam in Maharashtra under the Devendra Fadnavis-led Bharatiya Janata Party government, the opposition has accused Women and Child Development Minister Pankaja Munde of irregularities in purchases for the Integrated Child Development Scheme, a supplementary nutrition scheme for vulnerable children and women.

The chief minister and the minister have since clarified that the contracts were awarded in February, before the e-tender process was put into place beginning April. A few days later, it has emerged that the largest contract worth Rs 104 crore for supply of chikki – peanut brittles made with jaggery, coconut and micro-nutrients – was awarded not to anyone in the BJP, but to Pradnya Parab, a Congress councillor. Parab heads the Suryakant Mahila Audyogik Sahakari Sanstha which has a turnover of over Rs 300 crore in Sindhudurg.

In 2004, following reports of corruption, the Supreme Court gave several orders for removal of contractors for the supply of hot cooked meals and take home rations for children and pregnant and lactating women under the ICDS scheme. It ordered that the supply of supplementary nutrition provisions be done only through local groups, gram panchayats, Women's Self Help Groups, and mahila mandals to promote local production, local employment, and allow local monitoring by communities.

What then explains that the supply has come to be captured by political parties in Maharashtra, whether with links to Congress or the BJP?

The ICDS scheme is a supplementary nutrition programme for children in age group 0-6 years, and pregnant and lactating mothers. In village-level anganwadis, take home rations are provided to children and to pregnant and lactating women. Besides nutrition, it focusses on immunisation, health check-ups, pre-school education of children, and health education programmes for women of reproductive age. Launched as a central government scheme in 1975, it is now run on a cost-sharing basis by states and the central government. 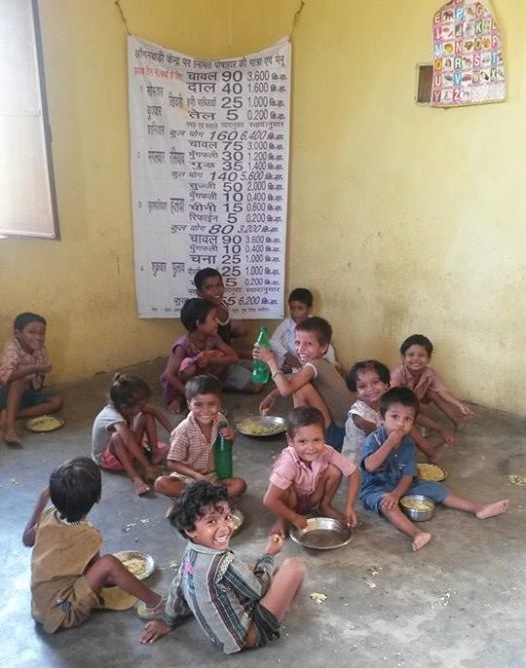 In 2011, an investigation by the Maharashtra State Commission for Protection of Child Rights found discrepancies in how much food the providers said they were distributing and how much the children were receiving. Following media reports of numerous complaints in the quality of food supplements in ICDS, the Governor of Maharashtra K Sankaranarayan ordered an enquiry in July 2012 into the Take Home Ration scheme for pregnant women.

An enquiry by one of the principal advisers to the Supreme Court commissioners in the Right to Food case revealed how contractors were gaining access to the scheme by subverting a clause in the state's orders on the scheme.

This was different from the Supreme Court orders.  In an enquiry report in October 2012, Biraj Patnaik, a social activist and a principal adviser to the Supreme Court commissioners in the Right to Food case pointed out that by including ‘‘woman institutions” or "mahila sanstha", the state government had opened the door to not just well-defined self-help groups and "mahila mandals" but any entity with women in it, irrespective of size and turnover. Earlier, under the Supreme Court directions of 2004, there was no ambiguity as the suppliers could only be groups with small turnover, comprised of women from Below Poverty Line families.

For his enquiry, Patnaik looked at three of the “woman institutions” providing supplies to ICDS –  one in Latur: Venkateshwara Mahila Audhyogic Utpadan Sahakari Sanstha Limited, and two in Dhule: Mahalaxmi Mahila Grhaudhyog & Balvikas Buddheshiya Audhyogic Sahakari Sanstha and Maharashtra Mahila Sahakari Grahudhyog Sanstha Limited. His enquiry revealed that the same method had been used by each group to allow outsourcing to private contractors.

These institutions were functioning as a front for the private companies, yet the state government and banks had given legitimacy to them by signing contracts and giving guarantees directly, even though they had submitted false sales tax clearances, noted Patnaik in his report to the apex court.

He pointed out that in instances of complaints in Take Home Rations, with several Zila Parishad local bodies refusing to accept the poor quality of nutritional supplements being sent to their villages, all three women's institutions in different districts had approached the same private laboratory for tests and submitted reports of quality being fine. But when the quality was tested in government laboratories in random samples, the Take Home Rations were found to be not only lacking in nutrition, but fungi and termites were found in them.

While both Maharashtra Chief Minister and the BJP have defended Pankaja Munde, this is not the first time the Munde family's name has surfaced in relation to corruption in the ICDS.

In the case of Venkateshwara, a sub-committee of the women's group of which one Vanmala Munde was a member, had given the production to a private agro-company called Swapnil Agro Pvt. Ltd. whose Managing Director was her husband, Satishrao Munde, who was influential in Nagpur's political circles and was reported to be close to Pankaja Munde's father, former minister Gopinath Munde.

Gopinath Munde had then denied the allegations. The Supreme Court's commissioners had recommended setting up of a Special Investigation Team. This was not done. However, in May 2013, the department of women and child development in the state set up a committee under the district collector to hand over the making and supply of Take Home Rations to small self-help groups and mahila mandals at the block level.

A letter by then principal secretary of the women and child development department Ujjwal Uke to the Supreme Court commissioners states that in December 2014 more than half of all supply was through small, local self-help groups. Uke, in fact, asked the commissioners of the Supreme Court to clarify the import of the Ministry of Women and Child Development's new circular in September 2014 saying states must ensure minimum nutrition standards in supply of food to anganwadis, whether through self-help groups, mahila mandals, or manufacturers. The commissioners reiterated that states ensure the supply remains decentralised to local mahila mandals.

For now, following the recent allegation of political corruption in the purchase of items for children enrolled in 60,000-odd anganwadis in the state, Maharashtra government has announced it will do a social audit. Principal Secretary Women and Child Development department Sanjeev Kumar has said the list of beneficiaries and the items distributed will be read out in gram sabhas to increase accountability.

Watch: Election Commissioner calls ‘winning at all costs’ the ‘new normal’ in politics