Contribute Now
Ad
The new pictures that NASA’s New Horizons probe has begun to beam back have revealed Pluto and its largest moon, Charon, in ever greater detail from what is the first ever spacecraft fly-by.

Pluto has an atmosphere and five known moons which have been glimpsed by New Horizons as it closes in, and while we can’t predict what we will find, whatever is revealed is sure to lead to renewed cries that Pluto be re-classified as a planet – a status it lost in 2006. 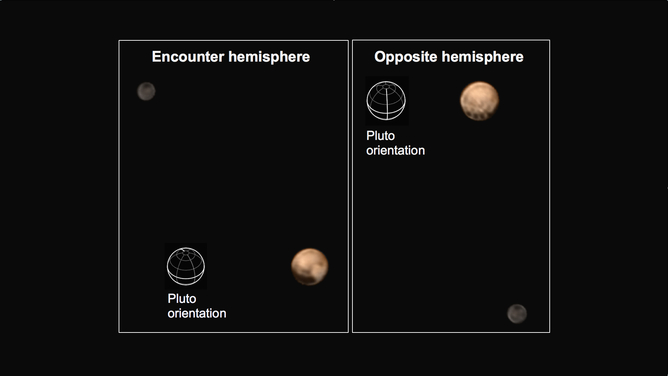 Pluto was embraced as the solar system’s ninth planet upon discovery by Clyde Tombaugh in 1930. He’d been looking for a planet where faulty data suggested a planet-sized body was perturbing the orbit of Neptune. This, he felt, was it – and the world agreed. Pluto’s mass was at first thought to be roughly the same as the Earth’s, but by 1948 estimates had shrunk it to the size of Mars.

When Pluto’s largest moon Charon was discovered in 1978, Charon’s orbit showed that Pluto’s mass is actually about only 0.2% of the Earth’s (one-sixth that of the Moon), and we now know that its diameter is about 2368km, or two-thirds that of the Moon.

Being so insubstantial, then, should Pluto be classed as a planet? There may seem no obvious reason why not. After all, the Earth is only 0.3% the mass of Jupiter. Planets clearly span a wide range of masses. But the main reasons why delegates to the International Astronomical Union (IAU) voted to demote Pluto from planet status are not based primarily on mass or size.

Pluto is one of many

Since the 1990s, many other roughly Pluto-sized bodies have been discovered beyond Neptune, such as Eris, Huamea and Makemake. There are more than a thousand objects now documented in what is called the Kuiper belt, a region beyond Neptune where it seems no large objects were able to form.

If Pluto had been discovered along with the others rather than 60 years earlier, there can be little doubt that no one would have called it a planet in the first place. There is nothing special about Pluto, other than the accident of having been the first to be discovered. 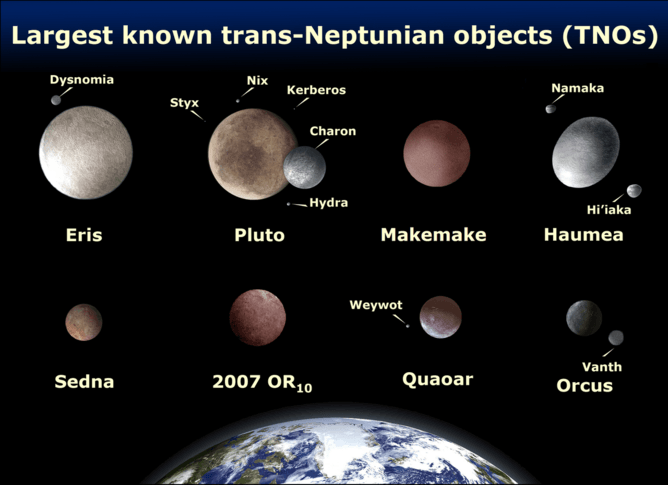 Eight of the so-called trans-Neptunian objects, including Pluto, and their moons. Lexicon

The crucial part of the definition of planet adopted by the IAU in 2006 is that a planet should have “cleared the neighbourhood of its own orbit”. Neptune, 8,600 times more massive than Pluto, has achieved this because neither Pluto nor anything else that crosses Neptune’s orbit comes close to rivalling Neptune’s mass. On the other hand Pluto clearly does not comply to this definition – it has rivals of comparable mass in addition to being overshadowed by the vastly more massive Neptune.

While it may be that this definition is hard to apply in other solar systems, it works for ours and is a far neater approach than including every Kuiper belt object as a planet – thousands of them, which would be ridiculous. The alternative of defining a size or mass minimum at which an object ceases to be a planet would suffer from our variable and imperfect ability to measure their size or mass remotely.

Nevertheless, the IAU shied away from completely stripping the Pluto of its appellation of planet by inventing a new term, dwarf planet. This denotes an object orbiting the sun that has not cleared its orbit, but which has sufficient mass for its own gravity to have pulled it into a near-spherical shape (described as hydrostatic equilibrium). This applies to Pluto, Eris and a few other Kuiper belt objects, and also to the largest asteroid, Ceres.

I think that was an unnecessary concession to the Pluto-is-a-planet lobby, though it proves that the IAU is not controlled by “a clique of Pluto-haters” as one astronomer has claimed. In fact it’s messy for two reasons. First, shapes cannot be precisely determined for objects that have not been visited by a spacecraft; they have to be assumed on the basis of mechanical models that could easily be wrong. Second, whereas the giant planets (Jupiter, Saturn, Uranus and Neptune) are planets, by the IAU’s own definition the dwarf planets are not planets. As Mr Spock might have said, “That’s illogical, Captain.”

Planetary scientists have a duty to describe the nature of the solar system as clearly as possible, and to lead the public to a clearer understanding of nature – irrespective of how its elements are classified. Appealing to sentiment, seeking celebrity endorsement and posting photos of presidential candidates with “Pluto is a planet” T-shirts is not a good way to advance anyone’s understanding. It’s time to let go of the past, and embrace Pluto a fascinating world and the most interesting member of the Kuiper belt.