Contribute Now
Ad
If she had not been out running that day, Mira Rai would never have met her fate. Running on the roads near her shared house in Kathmandu in March 2014, she bumped into Krishna Gurung, a Nepali ultrarunner. That day they ran together for three hours. Gurung asked to meet her again the next day at the same place.

Rai, 26, was there at 6am with no idea why. It was to run a tough, mountainous 50-kilometre trail at the Himalayan Outdoor Festival. It would be the first time she would run a 50K. She took nine hours and five minutes and was the only woman in the race. That finish line marked the start of her running career. Richard Bull, co-founder of Trail Running Nepal, a group that organises trail runs and ultra marathons in Nepal, first saw her run at the 50K in 2014. He said, “She really stood out as women rarely enter events at this distance and she was the only female entrant, and coming in not far behind the guys. So when someone unknown in this small community completed a hard 50km course in difficult weather conditions, and then beamed smiles, then it was natural to want to ask ‘Who on earth are you? You want to run more?’"

Over the next year, Rai would become not just Nepal’s first professional female trail runner but also one of the world’s rising stars in this sport. Since that 50K race, she has ranked first in 12 out of 15 trail races she has run internationally. Recently she won the technically challenging Marathon du Mont Blanc 80K and the Asia 50K Skyrunning Championship. She set a new record for the Mont Blanc race (shortest standard distance that is considered an ultra is the 50 kilometer distance, or 31.07 miles).

Born in a tiny rural village in Bhojpur district of the eastern hilly region of Nepal, Rai has been luckier than some of her peers, she says, who are also exceptional at running but never got the opportunity. Bull, who has become her mentor, helps her raise funds and participate in European races. “I was introduced to Richard sir, who later gave me an opportunity to participate in Mustang Trail Race,” said Rai. “I won and was invited by some foreign participants to compete in an Italian race. It was a very difficult race; I had to cross four hilltops and run 56K which I completed in 6 hours, 30 minutes and 30 seconds. I stood first in the race breaking the records.”

Life in the hills

Walking long rugged trails and rocky paths was introduced to Rai at a very young age. The eldest girl of four siblings, Rai was born on New Year’s Eve of 1989 to farmer parents. Her ancestral home, in village Sanodumma, is one of three on top of a hill in the middle of a jungle. Plodding miles for food or water was a part of life.

“Our family was deprived in many ways,” said Rai. “If we had bread for the morning, we weren’t sure if we had it for the evening. Because we had no regular income, we sold our animals for money. Sometimes, I went with my mother to a far village in order to trade rice so that we could earn a little bit of money to buy food. This journey would take us two days; we left at four in the morning and arrived home the next evening.” But she is not ashamed of those times. Energetic and giggly, Rai talks about her childhood factually, shorn of any sentiment, calling the long trudges carrying large sacks of rice good training. 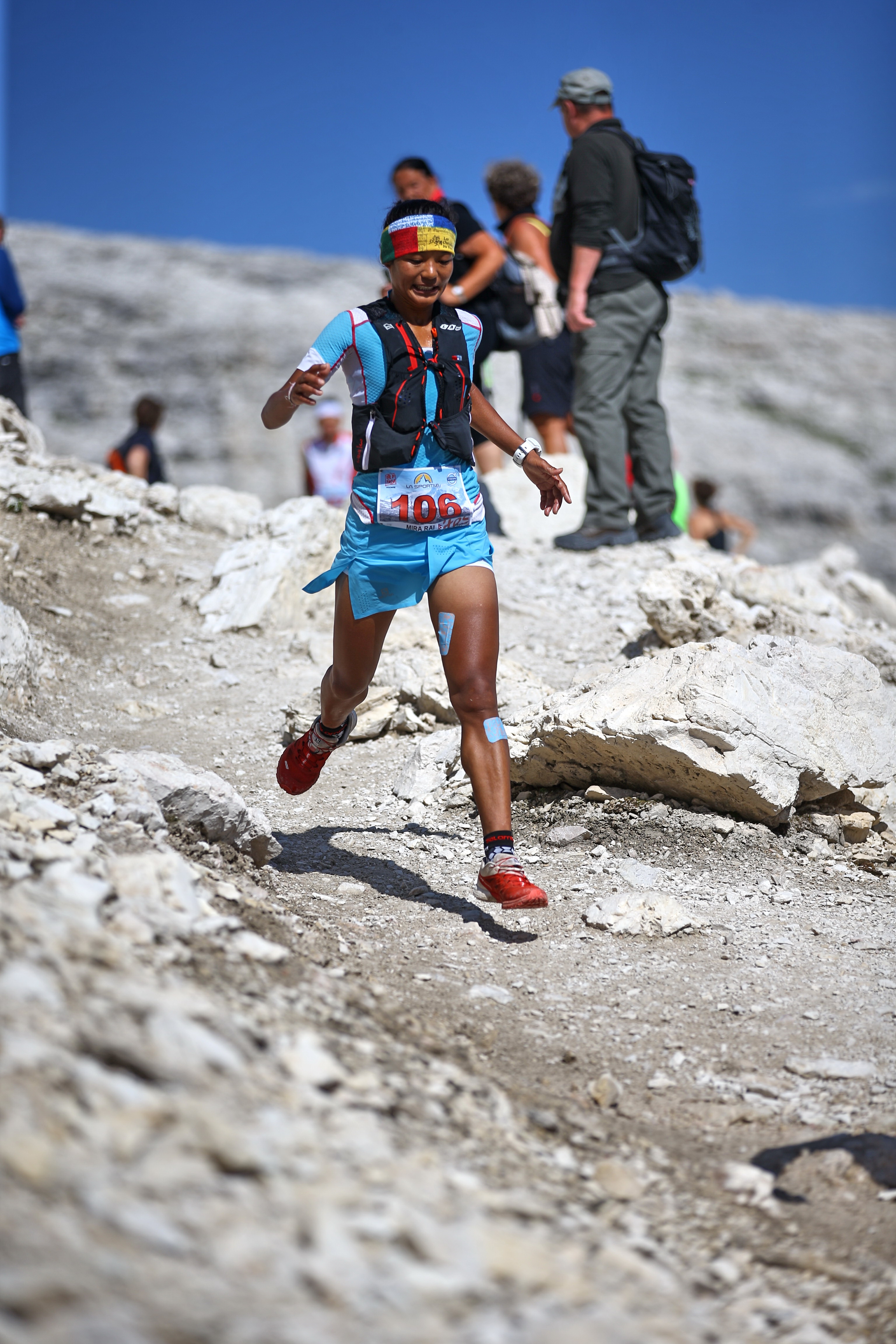 In her early teens, Rai quit school because she wanted to do something worthwhile and thought she could continue her studies later on. She joined the Maoist Army because she was told that it could provide her sports training and support. “I knew my life wasn’t just limited to cutting grass and going to the jungle. I didn’t want to be confined to my house and household chores.” The Maoist Army provided her with training and survival skills such as building houses and camps. “I played games and took part in competitions,” remembered Rai. “I passed my School Leaving Certificate while I was in the party and even got a chance to participate in the 5th National Games.” In the Maoist Army also Rai’s talent was noticed. One of her seniors and a talent scout, Dhruba Bikram, noticed her running and enrolled her in running competitions.

Rai didn’t leave the party willingly; she was disqualified after she received her weapons training a few years ago. “I was given Rs 10,000 in my hands and sent away in a bus which was quite unexpected for me. For some time, my hope of bringing out a change was shattered. In hindsight it was supposed to happen so that I could be where I am today,” Rai said with a smile.

Today she lives and trains in Kathmandu. Her races across the world are sponsored by donations and crowdfunding. This September she will run the longest race of her career at 103K. Bull said, “Trail running has all kinds of distances and kinds of terrain but it is the longer events, 80K and up, where she is right up there at the top with existing world champions.”

In spite of her prodigious burst into trail running, she does not get any governmental assistance. “It's not an official sport under international amateur athletics yet [though it will be recognised this month] so officials don't or can't support it. Track running is,” said Bull. “The irony is Nepal must have enough hilly trails to stretch to Pluto and back but just a couple of tracks in good condition.”

Rai doesn’t know why she began running but she believes it can be a way out of household work for other girls. She said, “Life is all about taking chances and we will never achieve anything without hardships. Trail running is all about adventure; you ought to run up and down, sometimes on rocks and sometimes on four legs. There are no actual roads but the thrill is nothing like you’ve experienced before.”

This interview was made possible by Anusha Khanal, a 16-year-old student in Kathmandu who acted as the interpreter between Mira Rai and this reporter.