Will you stand in a queue that is likely to take 466 years to clear up? That’s how much time it will take the Delhi High Court to clear up its backlog of pending cases. Unfortunately, the situation is not so much better in lower level courts across the country where millions of cases are awaiting trial.

On Saturday, the Supreme Court of India launched a web portal as part of the National Judicial Data Grid which provides information on the 1.94 crore cases pending in district level courts across the country. Even though there are more than 2.7 crore cases pending in district courts across the country, the portal currently excludes data from Delhi and Madhya Pradesh, which is likely to be added later.

Aimed at providing access to near real-time information of the pile up in the judicial system to the general public, the portal provides a comprehensive view of cases waiting in courtroom closets.

“This initiative is in furtherance of the motto of judiciary to promote transparency and access of information for all the stakeholders of the justice delivery system,” the Supreme Court said in a statement released along with the launch of the portal.

The portal not only informs about the number of cases pending in the courts but also provide crucial details such as their state-wise break up and the number of years for which they have been pending. This is where it begins to get murky.

More than 20 lakh cases currently pending in the district courts are at least a decade old. Out of these, at least 70% are criminal cases which only shows how those who have suffered from crimes also end up suffering from the problem of delayed justice as more than two out of every three pending cases are criminal in nature. 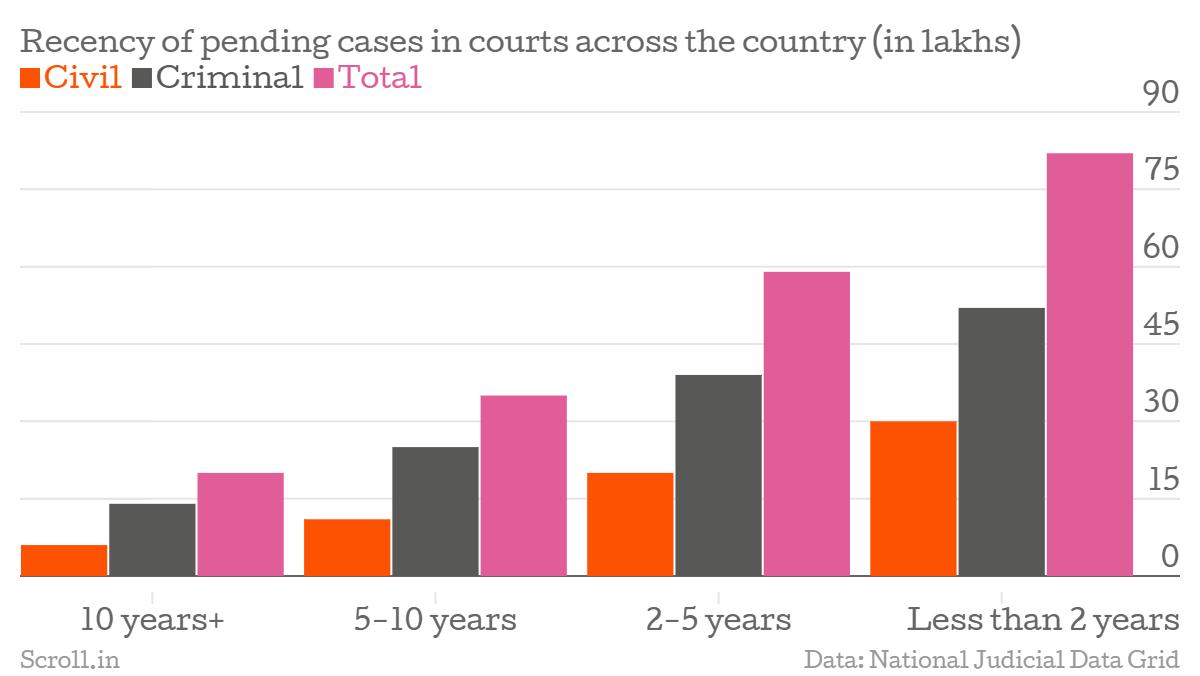 "Some of the major reasons for high pendency of cases in subordinate courts are poor judge-population ratio, prolonged and costly litigation caused by procedures and lawyers' interests, poor infrastructure, shortage of judicial personnel (and) weak alternative dispute resolution mechanisms," the Standing Committee on Law and Personnel said last year.

This implies that total number of cases which have been pending for more than two years account for nearly 60% of the total backlog. 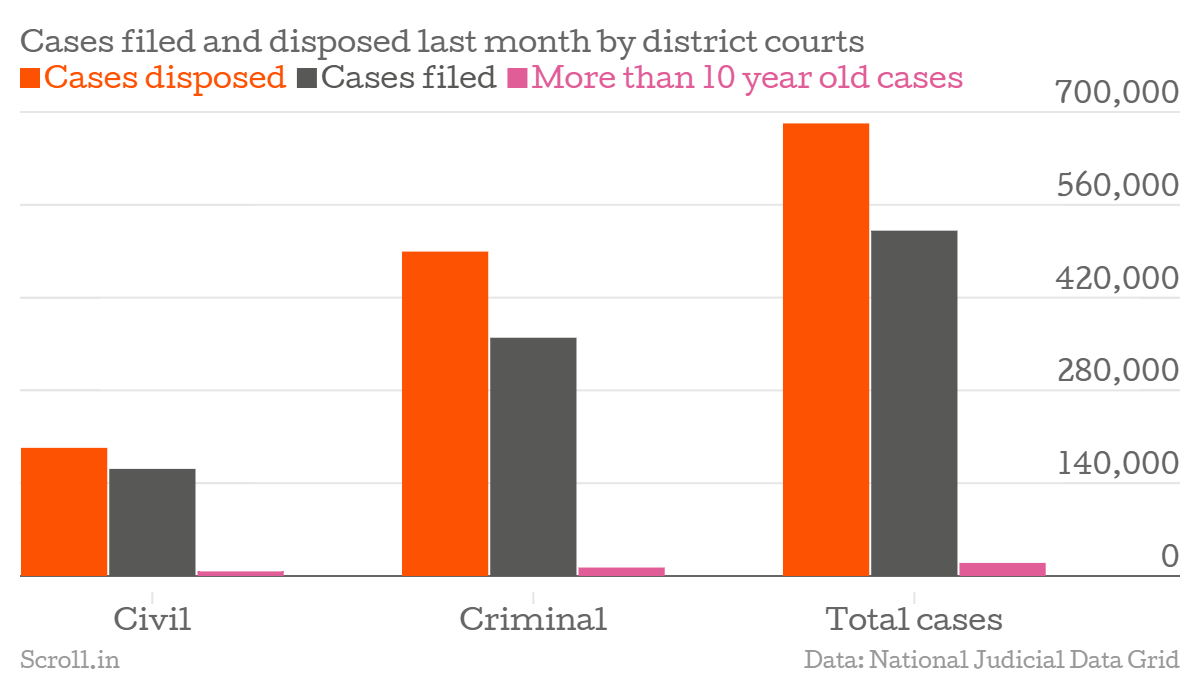 To put it in context, at least 5.2 lakh new cases were filed in the same duration, making it further difficult for the courts to deal with the huge pile up.

While there are close to 15,000 courts housed in more than 2,500 complexes around the country, the number is just not proving enough to clear the piling cases in time. According to an estimate, only five minutes were available to the Delhi High Court in the year 2011-2012 for clearing each case even as the court confessed that it will need at least 466 years to clear its own backlog of criminal cases alone.

In 2010,  the then Andhra Pradesh High Court judge Justice VV Rao in 2010 estimated that it would take 320 years for the Indian judiciary as a whole to clear out its backlog.

“If one considers the total pendency of cases in the Indian judicial system, every judge in the country will have an average load of about 2,147 cases," he was quoted to have said by the Times of India.

The acute shortage of judges in courts across the country continues to be grim even today. More than 30% of the judges’ positions are vacant in the higher judiciary levels – the High Courts of the country where more than 4.3 million cases are pending.

In 2007, the government tried to tackle this by increasing the sanctioned capacity of judges in various High Courts but delay in appointments of judges led to a further dip in the judges to population ratio in the country. Terming it a "serious matter", last year, a Parliamentary Committee observed that over 3,200 positions for judges were vacant in different states across the country.

Even the highest court in the country, the Supreme Court hasn't remained untouched from the acute manpower shortage that ails the justice delivery system. According to estimates, the Supreme Court has close to 67,000 pending cases to tackle, with only about 30 judicial positions in total, out of which two to three have remained vacant at any point of time over the last few years.