Contribute Now
Ad
Thumabai Walekar realised her land had been sold in 2007 when earthmovers began tearing across her village, Mugaon, to make way for India’s first private hill station of Lavasa.

“That is when we began to fight,” she said.

That year, Walekar, a 60-year-old woman belonging to the extremely marginalised Katkar community, and other locals began to organise a legal battle against the planned township, with the help of Medha Patkar’s National Alliance of People’s Movements. Since then, they have filed cases in courts and written petitions to various arms of the government. They asserted that as members of a scheduled tribe they enjoyed stricter protection under the law and their land couldn’t be sold without the consent of the Collector on behalf of the state government. How, then, did the land go to Lavasa?

In September, Walekar and others got some relief. The Pune Collector took notice of a petition signed by Patkar drawing the state revenue department's attention to the case and asked the sub-divisional magistrate in Pune to examine the issue. In his order, the magistrate categorically said that 191 hectares of land within the proposed site of the Lavasa project was adivasi land and would have to be restored to their original owners.

Despite the favourable directive though, this will not be the end of Walekar’s struggle.

Lavasa Corporation Limited, a subsidiary of Ajit Gulabchand’s Hindustan Construction Company, has declared that it will contest the order legally. It claims that the land records at no time showed these lands as tribal lands. Besides, it says, it owns only 23.75 hectares of the 191 hectare plot, while the rest belongs to smaller private players. 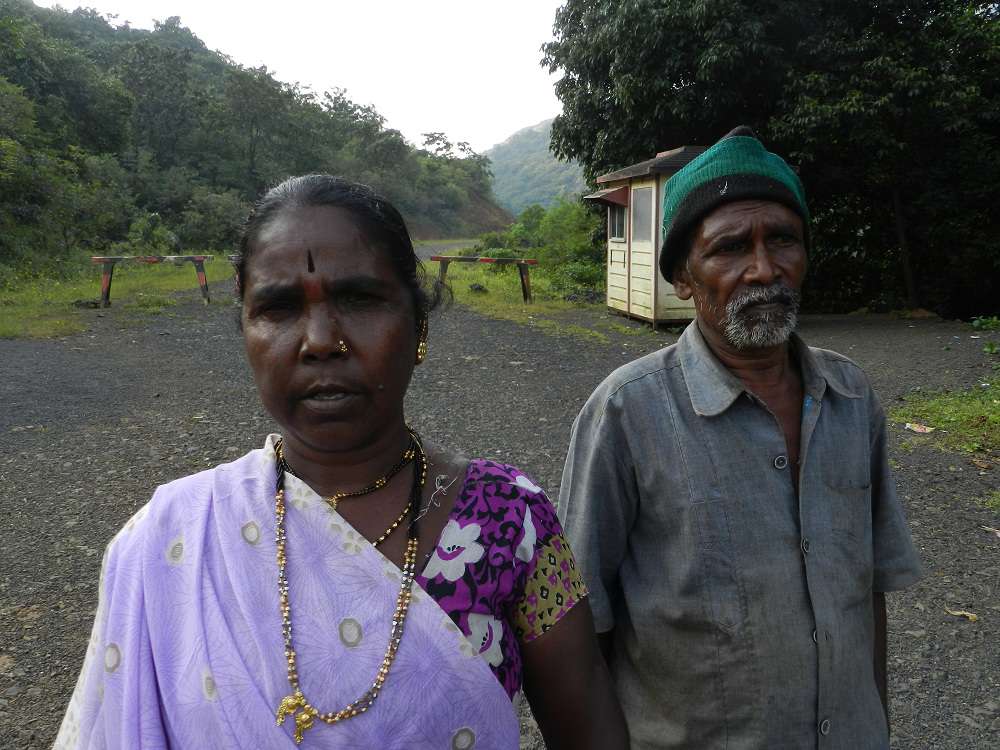 On the ground, Mugaon can seem worlds away from the conflict.

It is nestled in the upper slopes of the Sahyadri mountains in Maharashtra’s Pune district, near the Warajgaon dam. A large number of landowners in the village are advasis and formerly landless people who became beneficiaries of state land after the government dissolved large landholdings in the 1960s. Since the hills do not support traditional cash crops, the villagers grow millet, vegetables and local rice varieties here.

It is these hills that Lavasa wants to reimagine as “independent India’s first new hill station”. The project, which began in 2004, aims to create a planned township – with residences, hotels, a city centre, schools and even a hospitality management college – over 7,500 hectares between Lonavala and Pune. One section of the township was built in 2004 on the land of Dasve village along the backwaters of the Warajgaon dam that serves Pune. Meanwhile, inhabitants of Dasve were moved from the slopes to the top of the hill. 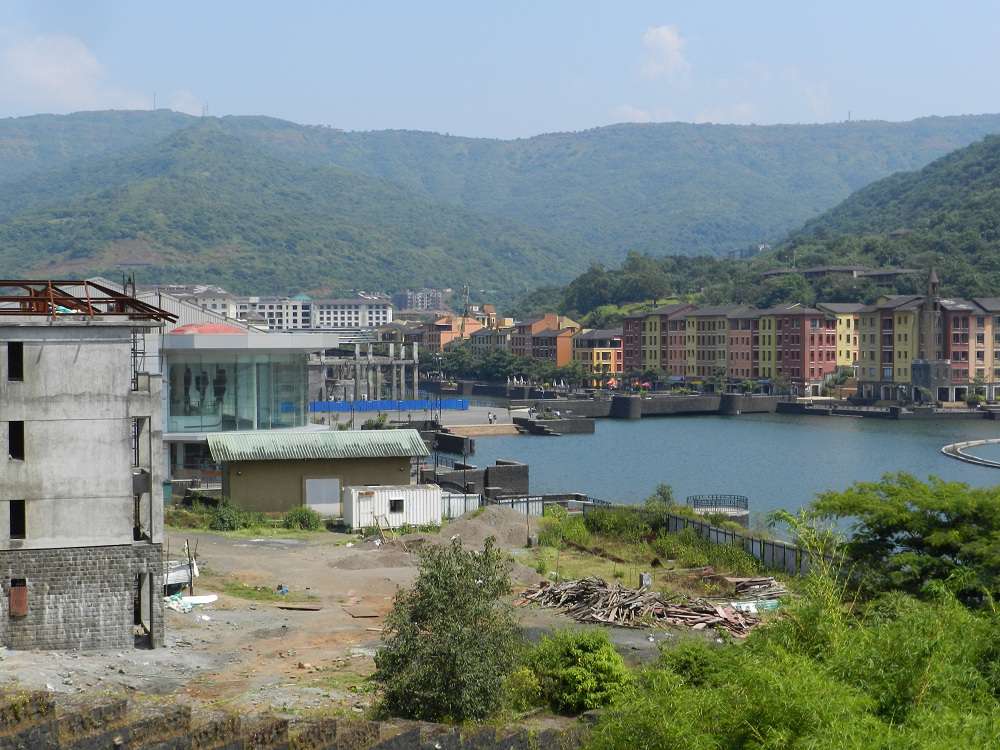 Complete and incomplete buildings at Dasve.

Sharad Pawar, the Nationalist Congress Party chairperson and a former chief minister of Maharashtra, said in a 2010 interview that this project, though run by Ajit Gulabchand of Hindustan Construction Corporation, was a dream of his, down to the selection of its location. Sharad Pawar, his nephew Ajit Pawar, his daughter Supriya Sule and her husband Sadanand Sule were partners in Lavasa Corporation Limited until 2007.

From the very beginning, activists have been critical of the project and alleged that everything from its environmental clearances to land purchase process merits closer examination.

Their allegations became stronger in late 2010, as the Environment and Forests Ministry issued a show-cause notice to Lavasa, alleging a violation of the environment impact assessment notifications. The matter is pending in court.

Two years later, an order of the sub-divisional magistrate found that some of the land Lavasa had purchased was ceiling land, which cannot be sold without the approval of the Collector. It ordered Lavasa to pay a premium of Rs 11.69 crore to regularise that land – which the company did.

In 2015, on the request of the Pune Collector and on the basis of letters written by Medha Patkar, coordinator of the National Alliance for People’s Movements, a sub-divisional magistrate examined whether there was tribal land in the proposed site of Lavasa. The magistrate found 191 hectares.

These 191 hectares had once belonged to owners of large tracts of land. In 1961, the Maharashtra government enacted its Agricultural Lands (Ceiling on Holdings) Act, mandating that no single person could own more than 18-54 acres of land depending on the kind of irrigation it had. Any land exceeding the ceiling would be acquired by the state and redistributed to landless people, not necessarily those living in the same area. Importantly, in this exchange, the state remains the ultimate landowner, while those to whom the land is allotted are its custodians. Such land can only be transferred if the Collector gives the permission on behalf of the state government.

The Pune sub-divisional magistrate, in his September 2015 order, pointed out that the consent for the purchase of this land had not been obtained and therefore ordered it to be transferred back to the adivasi residents. The magistrate added that this decision would have been taken in 2012, when activists first brought the case to the office, were it not for the absence of caste certificates.

This is where the issue takes a complex turn.

The recipients in the 1960s of much of the land absorbed into the state’s land ceiling bank were members of scheduled tribes. During the handover, there was a failure on the part of the government: it neglected to stamp the tribals’ 7/12 Form, which is the revenue department’s comprehensive record of landholdings and land transfers maintained across decades, with notes stating the caste of the landholders.

Raya Katkar’s family is originally from Raigarh. They came to Mugaon in the 1950s to make fuel in the forests of the Western Ghats. When the Land Ceiling Act came into effect, the family received 14 acres (or about 5.6 hectares) from the state.

Like many others in Mugaon, Katkar says he did not know where the land in his name was. He pointed to a hill that was divided between 14 people by the government. “We had no idea where our land was,” he said. “We cultivated land where we could, without any boundaries.”

In 2008, Katkar found his 14 acres had allegedly been sold to a woman he had never met. 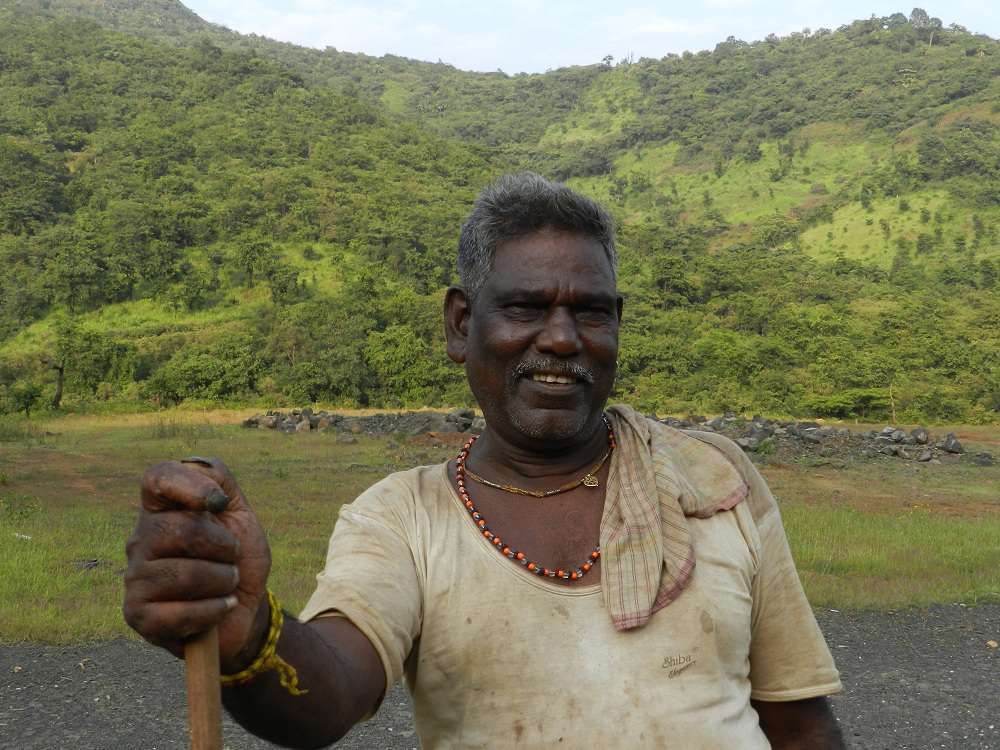 Walekar has a similar story. Her family too came to Mugaon from Raigarh, receiving 14 acres from the government, and she too says that she realised her land had been sold after earthmovers came to raze her house in 2007.

“We never went to any office, or met any sahib or sahib’s son,” Walekar said. “We do not know how this land was sold, but it was not with our knowledge.”

While villagers insist they never sold their land, it was somehow purchased by land agents at the time the site of the luxury township was announced, said Prasad Bagawe, an activist with the National Alliance for People’s Movements who is working with locals on the Lavasa case.

Lavasa later bought parts of this land purchased by agents – often after the land had changed ownership twice or thrice. The site of the Lavasa township was originally planned to stretch across 12,500 hectares. This was later revised to 7,500 hectares. The company has purchased 4,500 hectares through around 1,500 private transactions, it said.

Tribal land and the case at hand

Another problem is that many of the landowners did not have caste certificates proving they belonged to scheduled tribes and, therefore, the land in their name was by default tribal land. Katkar got a caste certificate only in 2007. Others involved in the case received theirs as recently as this February.

“It is pertinent to note that it was for the first time ever that the SDO declared 23.75 hectares of Lavasa Corporation’s (LCL) land as tribal land,” the Lavasa spokesperson said. The land records, the spokesperson added, at no time showed these lands as tribal land. Nor did the records contain mandatory remarks that would indicate that these were included as tribal lands under Section 36 (a) of Maharashtra Land Revenue Code of 1966.

Activists with the National Alliance of People’s Movements, however, say there is much more land in the planned Lavasa site that falls under the category of ceiling lands. This will be their next target.

In its promotional literature, Lavasa promises that Mugaon, where Katkar and Walekar stay, will be transformed into an urban wonderland.

“Residents of Mugaon, from their studio or 1.5-4 BHK apartments, will have easy access to the best in entertainment, leisure and hospitality,” the company says on its website. “Because the town is slated to be home to a Hollywood-Bollywood Theme Park, Space Theme Park, one of the world’s premier football and rowing academies, education and R&D centres, and the finest in hospitality.”

Several buildings, including a school, a town hall, hotels and residential apartments, have already come up in Dasve, the first of the 20 villages that are to supposedly benefit from the township: but as a trade-off the inhabitants of Dasve have been relocated to the top of that hill. Lavasa began work in the second village, Mugaon, around the same time, levelling hilltops, filling small valleys, slicing through hills to build new roads and expanding existing ones.

Lavasa has built houses uphill for those adivasis of Mugaon it has displaced down below. These houses are in disarray, unpainted, half-built and poorly maintained. Built of concrete, they retain heat in summers and become cold in winters. 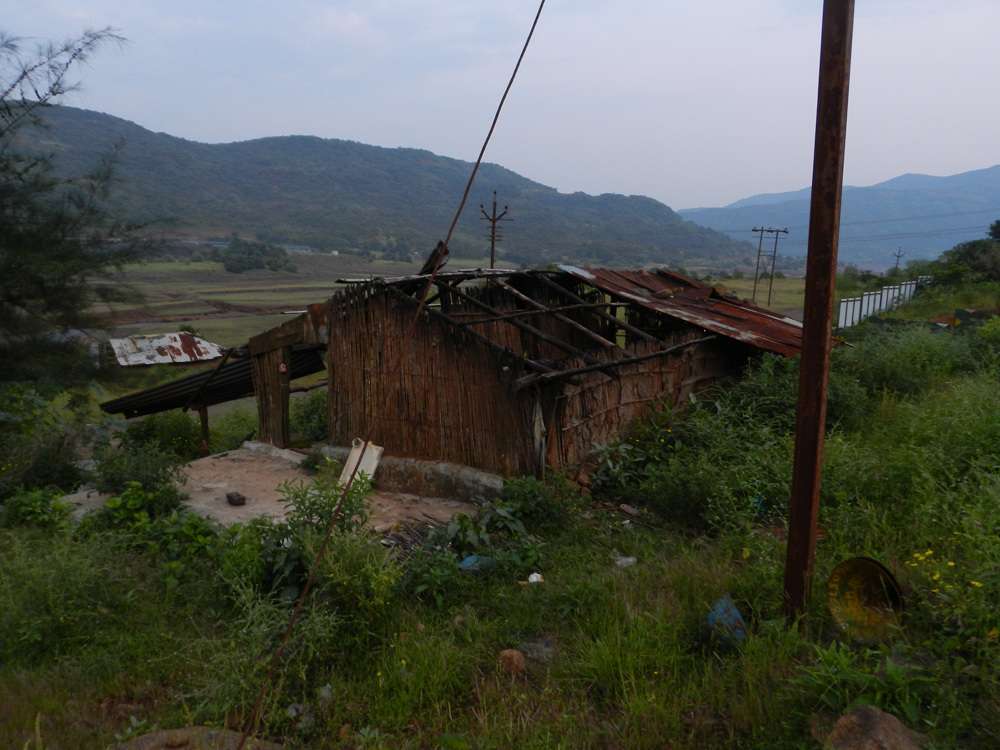 An adivasi house in Mugaon abandoned after its residents shifted up the hill.

For now Mugaon looks nothing like what was promised. Construction there has halted after a court issued a stay on further development, leaving small patches of unpainted concrete shells of buildings scattered across the village and uncertainty for those who remain there.