Become a Member
Ad
In early hours of October 3, a hospital run by the international organisation Medecins Sans Frontieres (Doctors without Borders) in Kunduz city of northern Afghanistan was bombed by a US AC130 aircraft. At the time of the attack, more than 100 patients and 80 staff members were on the premises. At least 30 people were killed in the strikes.

While both Afghanistan and the US are conducting their own investigations into the attack, MSF has already finished a preliminary review of its own that describes the effects of the tragedy.

“Patients burned in their beds, medical staff were decapitated and lost limbs, and others were shot by the circling AC- 130 gunship while fleeing the burning building,” the report said.

Even though US has sought to explain the strike by claiming that its army was targeting “insurgents who were directly firing upon US service members”, MSF says that the hospital was fully in control of the organisation before and during the attack.

“What we know is that we were running a hospital treating patients, including wounded combatants from both sides – this was not a ‘Taliban base’,” the report states. "All MSF staff confirm that it was very calm in the hospital and its close surroundings. No fighting was taking place around the hospital, no planes were heard overhead, no gunshots were reported, nor explosions in the vicinity of the hospital."

The report emphasised that the rules of war protect hospitals from being targeted by the military.

“The attack on our hospital in Kunduz destroyed our ability to treat patients at a time when we were needed the most,” MSF stated in this preliminary report, the conclusions of which could differ greatly from the investigation being carried out by US.

“We need a clear commitment that the act of providing medical care will never make us a target," it said. "We need to know whether the rules of war still apply.”

The report also contained these dramatic satellite images showing the hospital complex before and after the strike. 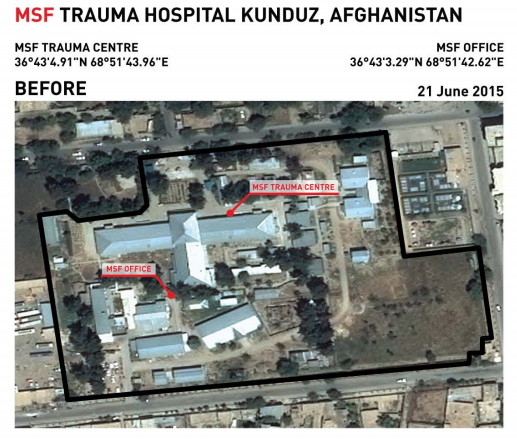 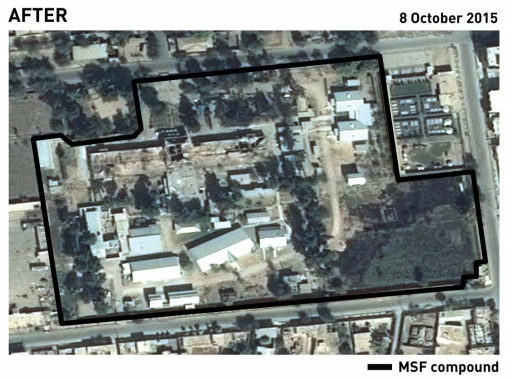 “Although the main building was principally targeted, as can be seen in the satellite image, within this main building there were some rooms that were left largely untouched in the airstrikes," the report said. "This includes the eastern part of the OT [operation theatre] wing, notably the sterilisation room in which most of the team from the OTs had sought shelter immediately after the first strike.”