Contribute Now
Ad
Ghasiya Oraon was one among a group of tribal farmers patiently waiting outside the Pragya Kendra, the office that administered services for the village, in Rol Toli in Ranchi, Jharkhand.

It was five in the evening of a humid September day. They had been waiting for several hours and now the power had gone out, putting the systems on the blink.

Oraon was in line to open new accounts for his three school-going children. Till the other day, the state scholarships for tribal children had been disbursed in cash directly by their school. Now the school, citing the Pradhan Mantri Jan Dhan Yojana launched in August 2014, had said that each child had to be enrolled in Aadhaar, the biometrics-based database programme, and open a bank account in order to avail the scholarship.

Sanjeet Mahto, area banking correspondent for United Bank of India, whose job it is to open the bank accounts, marked time waiting for the electricity to come back. “This is a regular problem,” Mahto lamented. “Every day, we get only about four hours of electricity. No bank transactions can be done.”

Opening new accounts was time-consuming, Mahto said, and it was not only because of insufficient infrastructure. Of the 1,238 new accounts he had opened in Lali panchayat the previous year, a third – over 400 accounts – had since been frozen for lack of any transactions. Re-activating the frozen accounts entailed starting from scratch – each villager had to re-submit his proof of identity and residence. “This may take several weeks or months,” said Mahto. 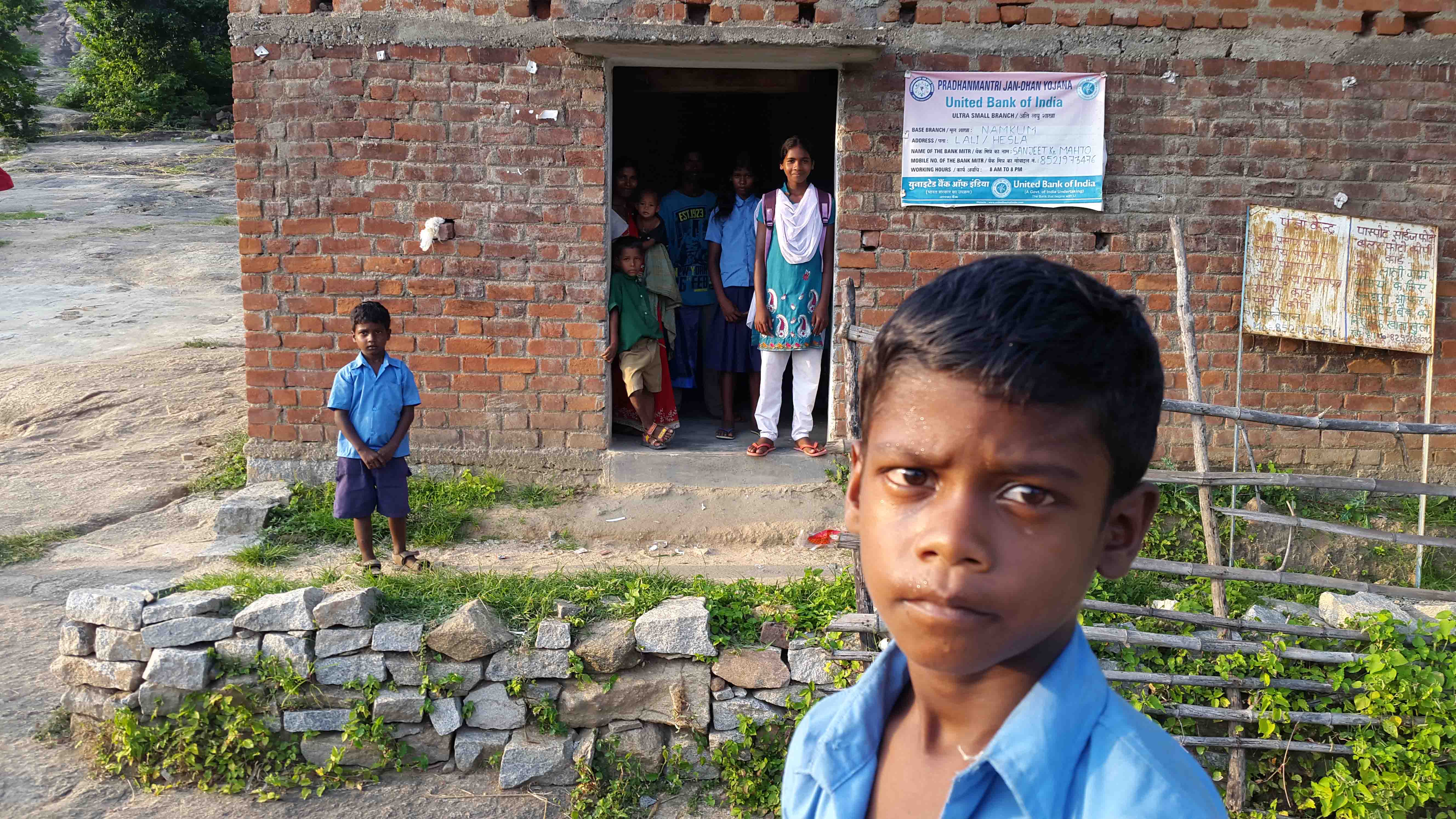 To solve the problem of low banking access – only 53% of all Indians have a bank account – the Narendra Modi government in August ordered banks to open zero-balance accounts for every citizen. To overcome the related problem of dormancy – many of the new accounts had no money in them, and reflected no transactions – the government attached these new accounts to insurance schemes. It also offered an overdraft facility, similar to a credit card facility, of Rs 5,000 or 50% of turnover, whichever was lower, through a RuPay debit card.

Addressing the Delhi Economics Conclave on November 6, Modi said the Pradhan Mantri Jan Dhan scheme was “transformational” in its impact, and had led to a “quiet revolution”. Since the launch of the programme, the prime minister said, 19 crore people had been brought into the banking system, with the accounts having a total balance of Rs 26,000 crore. He pointed out that 36% of all debit cards in India were now RuPay cards.

But closer scrutiny of the numbers underlines the limitations of the scheme. Of the 19.1 crore bank accounts opened all over India as of October 30, over one-third of the total  – 7.1 crore accounts – were dormant, with no money in them. In Manika in Latehar, Jharkhand for example, banking correspondent Ramesh Gupta said 40% of the new accounts opened since last August were now inactive.

Many users are too poor to have substantial savings. Also, several features needed for the government transfers to work – including infrastructure and legal sanction to use of Aadhaar in all social schemes – are not yet in place.

Similarly, of the 16.37 crore RuPay debit cards issued as per government figures, 22.4 lakh accounts, or only 1.3%, have the overdraft facility. The number of those who have actually used this facility is even lower at 8.3 lakh, or less than 1% of the total beneficiaries.

In villages in Jharkhand, beneficiaries expressed disappointment in the scheme. While opening new bank accounts, they had interpreted the overdraft facility to mean that the government would put Rs 5,000 in their bank accounts as a subsidy, which was not the case.

Ghasiya Oraon opened an account with Allahabad Bank in 2013. In February, he got a second account under the Jan Dhan scheme. “I had heard that those who open a new account will get Rs 5,000," said Oraon. "I went and enquired twice at the bank, but I have still not got this amount." Others waiting in line concurred.

Even the banking correspondents proved to have little or no information about how the overdraft facility works. In most instances, RuPay cards have not reached the beneficiaries. In instances where they have, the users have not got the PIN numbers needed to operate the card.

In Navagarh panchayat in Latehar, a forested district along Jharkhand's western border with Chhattisgarh, area banking correspondent Sarwar Alam has opened 600 accounts in the village, but not a single one of the villagers has been able to use the RuPay card facility. “The post does not reach the village regularly, so the PIN numbers don't reach on time,” said Alam. “By the time the PIN reaches the village and the concerned person makes the trip to town to activate it, it has stopped working. Banks destroy the PIN if it is not used within a month.”

Alam tried to figure out for himself how the overdraft facility works, and failed. “I maintained a balance of Rs 1,200 and did a few transactions, but even then I could not get the overdraft to work,” he said. 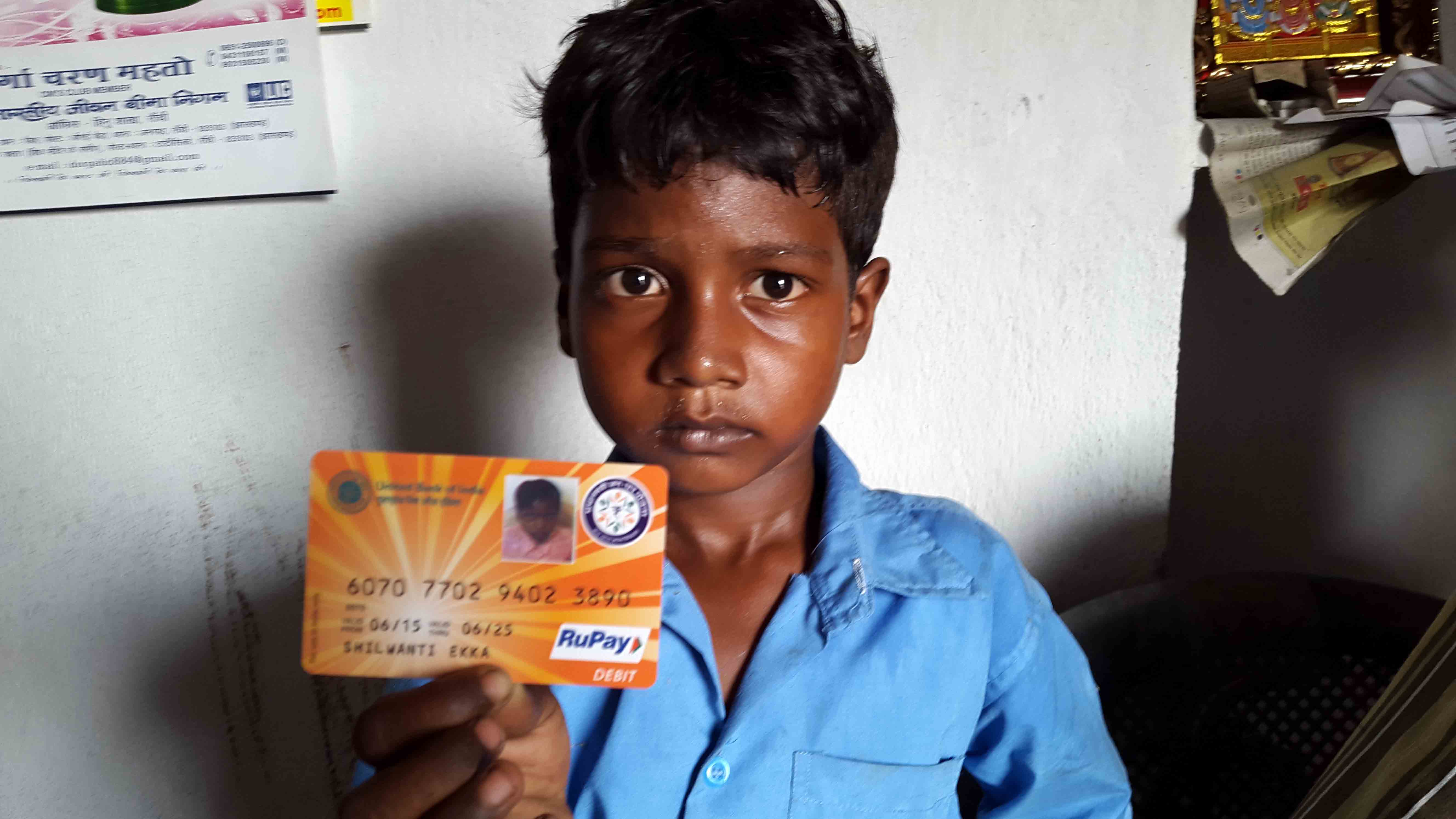 Originally given to only adult, literate account holders, bankers say RuPay cards were later provided to all users.

This story is not true only of the relatively inaccessible areas of the forested interior, such as Latehar. In Lali panchayat near the state capital Ranchi, Sanjeet Mahto, the banking correspondent for United Bank of India, said that of the 1,238 accounts opened under the scheme, only around 500 had got their RuPay debit cards, and of these, not a single villager had got the overdraft facility.

Putting the cart before the horse

In Ranchi, officials in the department of rural development who supervise the scheme blamed the developing fiasco on public banks who, they said, had not sufficiently publicised the mechanics of the scheme.

More than 40 lakh Jan Dhan bank accounts have been opened in Jharkhand and over 29 lakh RuPay debit cards were issued, said MK Gupta, a manager at the Bank of India and head of Jharkhand's State Level Bankers' Committee, a forum of bankers coordinating development schemes. He was reading out from a progress report on the scheme, which he has to submit once every two weeks  in a video call with the finance ministry. But, he admitted in an aside, only a small proportion of these accounts were active.

Gupta put the blame on logistics. “Nearly 70% of the villages here get no electricity and 44% of Jharkhand has no internet connectivity,” said Gupta. “Our original plan was to go door-to-door for mobile micro-ATM services, but we have had to do it at the panchayat level using small satellite ground stations, and we are facing problems with this.”

He added that while the passbooks were hand-delivered by the banking correspondents, the same agents were not given the job of delivering RuPay cards and their PINs because of security concerns. Further, RuPay cards need to be activated at ATMs, which do not exist in villages. An option exists to activate the cards by submitting applications, but this too had not been done in most villages.

Another senior banker, a member of the State Level Bankers' Committee who requested anonymity, said the central government was rushing the scheme through even though on the ground, at district and village level, the banks were not prepared for this transition. “The villages have poor connectivity, there were security concerns in many parts,” he said. “These should have been sorted out and prepared for. Instead, Delhi tried to rush everything.”

A faultily functioning scheme, and much confusion on the ground, has been the outcome.

No takers for pension scheme

In his November 6 address in New Delhi, Prime Minister Modi said that along with opening bank accounts for everyone, the government was providing a safety net to the poor through three new social security schemes that provided accident insurance, life insurance and pensions. The schemes have already registered over 12 crore subscribers, Modi said.

Experts point out that the test of an insurance scheme is in what happens with regards to claims. Finance ministry data show that there is a massive number of subscribers, but an extremely low number of claims. Till October 30, 9.1 crore subscribed to the accident insurance scheme, 607 had got their claims. Over 2.9 crore subscribed to the life insurance scheme, 1,450 claims were settled. The prime minister did not address the question of why the number of claims is minuscule, even several months after the schemes were launched, whether the subscribers among agricultural and unorganised sector workers were able to even submit a claim.

The Atal Pension Yojana, which offers small pension amounts to workers in the unorganised sector when they complete the age of 60, is based on monthly contributions from workers. It has the least number of subscribers, at 8.5 lakh, or less than 1% of the total subscribers to the three schemes combined.

The pattern is similar in states. In Jharkhand, 16.6 lakh subscribed to accident insurance and 5.9 lakh to the life insurance scheme, and only 8,037, had opted for Atal Pension scheme.

State officials said casual labourers and farm workers do not find it viable to maintain steady contributions for at least 20 years, as required in the pension scheme. “If a 40-year-old worker opts for the Atal Pension scheme today, she will have to contribute Rs 291 every month for 20 years, to get a monthly pension of Rs 1,000 when she turns 60,” explained an official in the rural development department. “How will workers who have no certainty about their next job, who don’t know what they will be able to earn next month, contribute a few hundred rupees monthly? No one wants to opt for the pension scheme.”

In October, the Jharkhand government held a three-day drive to increase the subscriber base, but it was not particularly successful. In Latehar, for instance, 3,000 new subscribers opted for insurance schemes in the course of the three-day drive, but only four people signed up for the Atal Pension scheme.

To massage the numbers, the state government has begun to shift government staff to the new pension scheme; these include para-teachers, home guards, beneficiaries of public schemes such as MNREGA, and self-help savings groups. In some instances, this was done without the subscribers' knowledge or consent.

“I found out recently that my pension account was shifted from Swawlamban National Pension System [launched by the previous UPA government] to the Atal Pension without my knowledge,” said an official in Latehar who requested anonymity. “The Swawlamban scheme required less contribution from me, and the return would have been higher than what I will get now under the new scheme. I said I did not wish to shift to Atal Pension, yet my account was transferred against my wishes.”

In its rush to declare the “Jan Dhan-Aadhaar-Mobile” scheme a success and to enshrine it as the basis for all social policy, the government appears to have systematically ignored the experiences of its intended beneficiaries – who now suffer from the consequences of this rush to implementation. 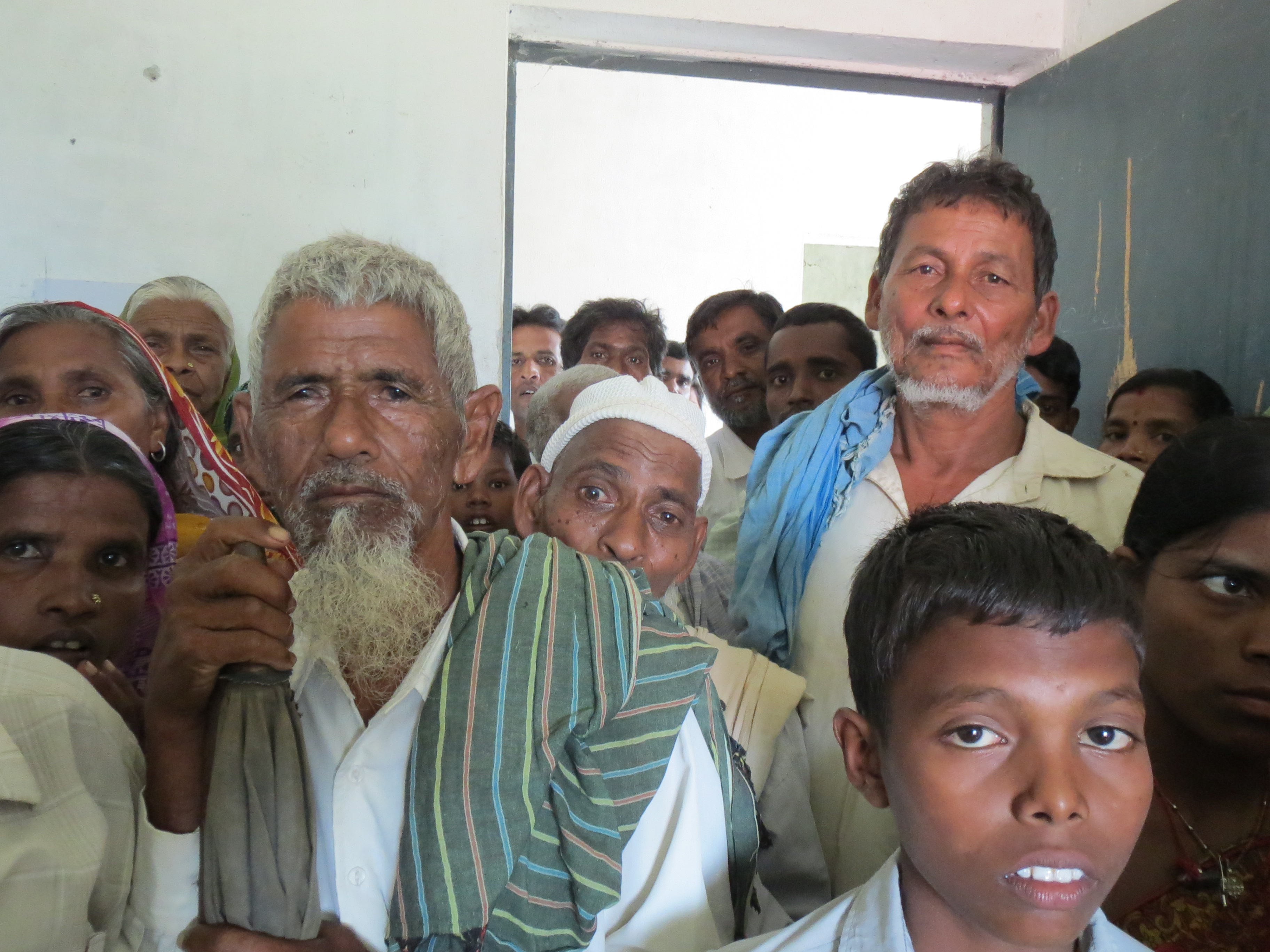 This is second part of a two-part series on the Jan Dhan-Aadhaar-Mobile programme. You can read the first part here.

Not just the one-rupee trick: How banks are hiding Jan Dhan's zero-balance accounts