Contribute Now
Ad
On November 20, 1945, the first of the Nuremberg trials began in the main court building of the Bavarian town of Nuremberg with the indictment of 22 of the most senior Nazis that had been captured alive.

Here in the dock were the architects and enforcers of the Holocaust and the Nazi regime’s countless other crimes – among them were Hermann Goering, head of the Luftwaffe and the Nazi rearmament effort; Hans Frank, who had treated Poland like his personal fiefdom and acquired the nickname “the Butcher of Kracow”; Hans Sauckel, who had organised the Nazi slave labour programme.

The trials are widely celebrated as a triumph of law over evil and marking an important turning point in legal history because dealing with the crimes of the Nazis paved the way for justice in the international community in general and the creation of the International Criminal Court in particular. It is this version of the story which has inspired the city of Nuremberg, which also hosted the infamous Nazi party rallies in the 1930s, to launch a new academy to promote the “Nuremberg principles”.

But while Nuremberg is celebrated today, the legal reality is not as clear-cut. As leading international criminal lawyer William Schabas remembers, “when I studied law, in the early 1980s, the Nuremberg Trial was more a curiosity than a model”.

The trials were also plagued by allegations of being little more than victor’s justice. These were made not only by Germans but also by American and British lawyers who felt it was a legal travesty. The judges and prosecutors were not neutral, but came from the four victorious powers – which led to such oddities as a Soviet prosecutor citing the Hitler-Stalin pact as evidence of German aggression against Poland, or a Soviet judge with ample experience of running Stalinist show trials trying to persuade his colleagues that the massacre against Polish officers in Katyn (who had been shot by the Soviets) should be added to the tally of German war crimes.

But the hypocrisy was not exclusive to the Soviet side: the London Charter of August 8 1945 which established the tribunal explicitly limited its remit to war crimes committed by the Axis powers. The tribunal also applied the so-called tu quoque principle which holds that any illegal act was justified if it had also been committed by the enemy (the Latin phrase means “you, too”). 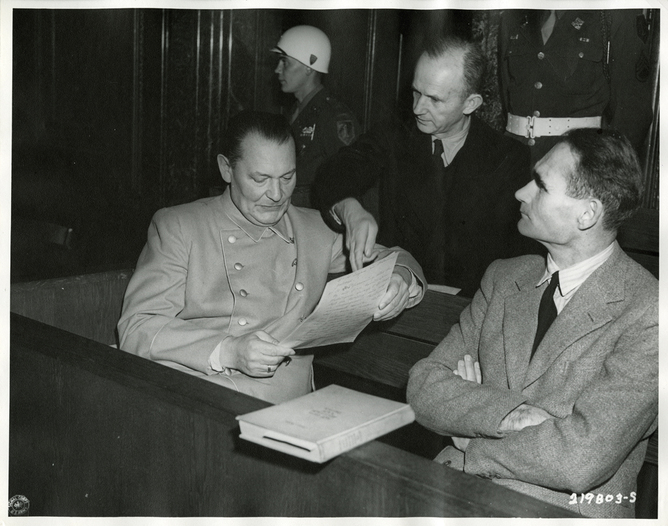 No Nazi was charged with terror bombardment since the use of strategic bombardment against civilians had been a pillar of the British and US war efforts. And when US admiral Chester W. Nimitz testified that the US Navy had conducted a campaign of unrestrained submarine warfare against the Japanese from the day after Pearl Harbor, the relevant charges against Admiral Karl Doenitz were quietly dropped.

So why celebrate this trial?

One reason to celebrate Nuremberg is the simple fact that it happened at all. Until just before the end of the war, Churchill, Roosevelt and Stalin favoured summary executions of thousands of leading Nazis as the appropriate form of retribution. An outcry among the US public once these plans were leaked was a major factor in laying the road to Nuremberg.

Instead of mass shootings, an old idea from the First World War was revived. The Versailles treaty had compelled Germany to hand over Kaiser Wilhelm II and hundreds of senior officers to an international tribunal to be tried for war crimes. But the Kaiser fled to the Netherlands and the German government refused to hand over any officers or politicians. This time, however, Germany was completely occupied and was unable to resist, so the trials went ahead.

Flawed or not, the Nuremberg tribunal could not have met a more deserving collection of defendants – and it gave them a largely fair trial. Next to 12 death sentences and seven lengthy prison terms, the judgements included three acquittals – one of them for Hans Fritzsche, who had been the regime’s public voice on radio but was not personally involved in planning war crimes.

Crucially, the Nuremberg trials established an irrefutable and detailed record of the Nazi regime’s crimes such as the holocaust at precisely the time when many Germans were eager to forget or claim complete ignorance.

The legacy: important but inconvenient

Today, the most relevant legacy are the “Nuremberg principles”. Confirmed in a UN General Assembly resolution in 1948, they firmly established that individuals can be punished for crimes under international law. Perpetrators could no longer hide behind domestic legislation or the argument that they were merely carrying out orders.

The Nuremberg trials also influenced the Genocide Convention, the Universal Declaration of Human Rights and the Geneva conventions on the laws of war, all signed shortly after the war.

The strongest impact should have been on the development of international criminal law, but this was largely frozen out by the Cold War. With the re-emergence of international tribunals investigating war crimes and genocide in the former Yugoslavia and Rwanda in the 1990s, the legacy of Nuremberg proved a powerful argument for establishing the International Criminal Court in 1998.The Rome Statute includes many principles developed in 1945, so the United States as the main proponent of the Nuremberg trials could take great pride in its impact, were it not for the fact that successive US administrations have fought tooth and nail against the ICC’s insistence that international criminal law might one day be applied against US citizens. So, 70 years later, Nuremberg’s legacy continues to be inconvenient.