Contribute Now
Ad
A hefty 58% of India’s defence revenue expenditure is taken up by pay and pensions for the personnel, but the demands for higher remuneration have never really subsided. One Rank One Pension protests, where military personnel lined up to return their medals, points to how the army personnel had to take to the streets to ask for their desired pay.

As the the protests were escalated, the government relented and announced implementation of the OROP, which is set to cost the exchequer an additional Rs 20,000 crore. Not so long thereafter came the seventh pay commission recommendations submitted in its report to the finance ministry, in which the panel took special note of the services of Indian defence personnel and maintained that the edge they enjoy in salaries over civilians should continue.

Noting that defence personnel are expected to provide a broad spectrum of services from time to time, not in the least risk their lives for performance of their duties, the panel said that they deserve the additional pay and benefits which include free ration and tax concessions. Consequently, officers of the defence services are paid 29% higher salary as compared to their counterparts from the civil services.

Even as the panel noted that India’s defence personnel are paid handsomely and will continue to be paid at international standards, a study commissioned by the seventh pay panel highlighted that it’s not quite the case.

According to the findings of a study of salaries conducted by the Institute of Defence Studies and Analyses, those serving at the highest positions in United States and United Kingdom are paid much more than their Indian counterparts. While those at the entry level positions such as Sepoys and Subedar Majors receive pretty much a similar basic salary as part of their pay packet, the gap widens much more as one goes higher up the ranks. 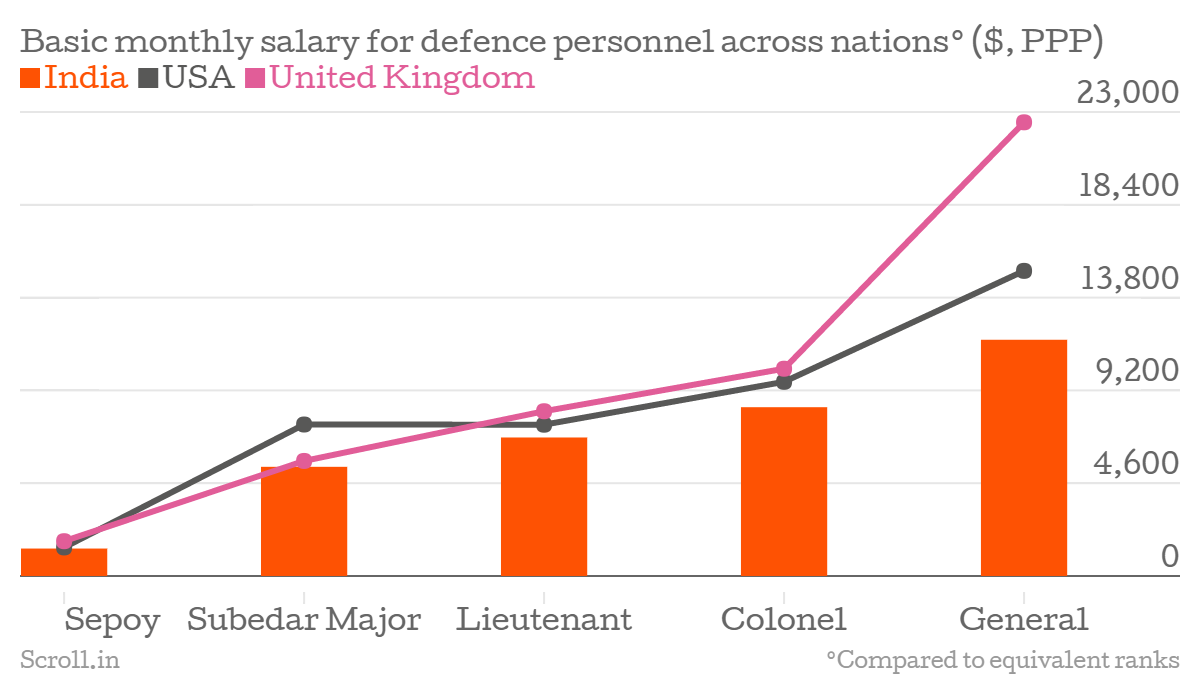 For instance, a General in the UK military would earn close to $23,000 a month as basic salary in purchasing power parity terms while his Indian counterpart would get less than $10,000 every month. In the US, the figure is around $15,000 for a top ranking army official.

The salaries of Indian army personnel in the above table, however, do not include the recommendations of the latest pay commission recommendations which are still subject to government approval.

The seventh pay panel argued that the remunerations of defence personnel in the three countries are at comparable levels as they should be seen in the light of their respective Gross Domestic Products per capita. Accordingly, GDP per capita in the USA is 9.4 times higher than India’s and 6.7 times higher in the case of UK.

The above chart shows how those at the sepoy level in the Indian army make almost the same money as their counterparts in the USA over a year. However, when compared to the respective GDP per capita, the chart also shows that those in the USA army make much less than the country’s GDP per capita, around one-third of it, while Indian sepoys end up making roughly three times the GDP per capita.

This, the pay panel said, should be reason enough to be assured that India respects its defence personnel, and pays them well.

“Defence service officers and JCO/ORs [Joint Commissioned Officers/Other Ranks] in India, based on VI CPC [central pay commission] pay scales, are placed quite well in terms of pay, even in relation to defence personnel in countries like US and UK, where the GDP per capita in PPP terms for the country as a whole is significantly higher,” the report said.

India’s military expenditure fifth largest in the world in 2017: Report