Contribute Now
Ad
India’s most industrialised state, Maharashtra, has the largest debt of Rs 338,730 crore among India’s states, but the southern state of Tamil Nadu – an industrial growth centre – has seen the maximum increase in debt (92%) over the past five years, according to an IndiaSpend analysis of state budgets.

There are two ways of looking at this indebtedness: it is funding a humming state economy or is indicative of a profligate government living beyond its means.

Debt is often used by governments to meet the gap between income and expenditure. Government borrows either to meet plan expenditure, for example, building roads and dams and non-plan expenditure, such as paying salaries or making interest payments. 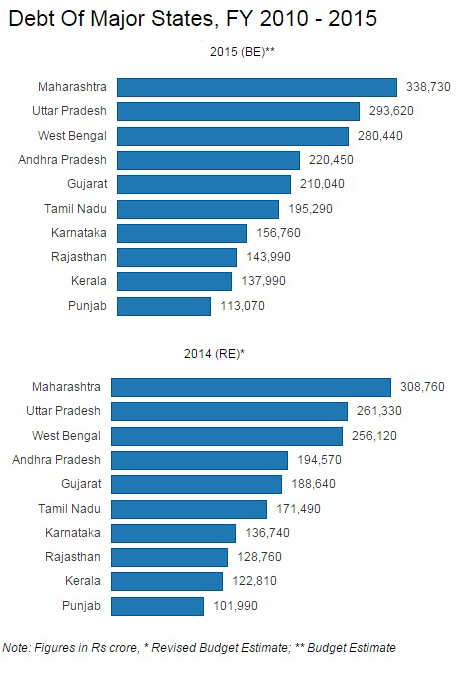 Maharashtra with the highest outstanding liabilities is followed by Uttar Pradesh with Rs 2,93,620 crore and West Bengal with Rs 2,80,440 crore.

Tamil Nadu has borrowed money at the quickest annual pace, 92%, followed by Karnataka with 85% and Andhra Pradesh with 78%.

Debt, per se, is not bad, if the state’s economic growth can sustain and service it. So, the key matrix to check is the debt as a percentage of the state’s gross domestic product or total economic output. 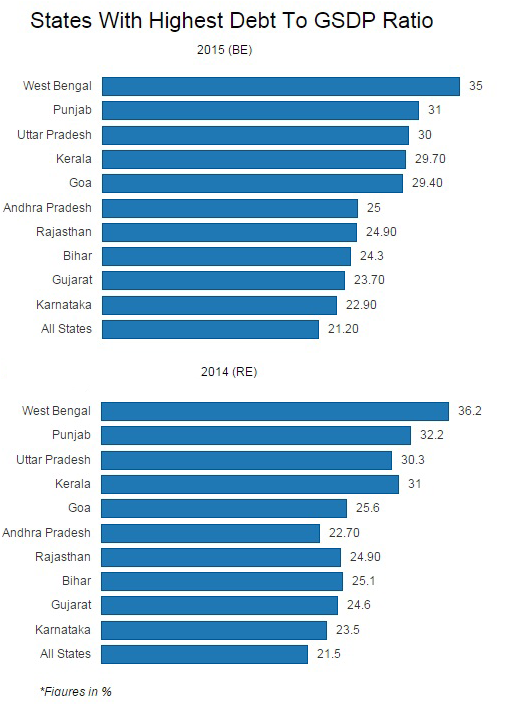 The good news over the past five years is that the debt-to-GSDP ratio for all the states has come down from 25.5% to 21.2%.

In West Bengal, despite the increase in outstanding liabilities, the debt-to-GSDP ratio has declined, which means the state’s GDP is growing at a fast clip.

Similarly, although Tamil Nadu is fast adding debt, its debt-to-GSDP ratio at 20% is lower than the national average. This shows that the state’s GSDP is growing despite the high growth in debt.

Once you borrow, you have to pay back with interest. Most states service debt from tax income. And a good measure of debt servicing is a lower ratio as a percentage of revenue expenditure.

IndiaSpend had earlier reported how states such as West Bengal, Punjab and Gujarat have been consistently spending huge amounts on interest payments.

The trend remains unchanged in 2014-2015 with the three states retaining the top spots. However, the encouraging sign is that there has been a reduction in interest payments as a percentage of revenue expenditure for all three states.