Contribute Now
Ad
Speaking at the Ramnath Goenka Excellence in Journalism Awards on Wednesday, Bollywood actor Aamir Khan noted that there was a “sense of growing disquiet” about India's social fabric. “When I chat with [his wife] Kiran at home, she says, 'Should we move out of India?'" he said. "That's a disastrous and big statement for Kiran to make. She fears for her child. She fears what the atmosphere around us will be. She feels scared to open the newspapers every day.

Following what has almost become a template now, the reaction was swift and vicious. A senior Bharatiya Janata Party minister from Maharashtra called Khan a “villain” and his statement “a conspiracy to defame the government, which will not be tolerated”. The Shiv Sena told Khan to “go to Pakistan”.

Since Aamir Khan is brand ambassador of e-commerce site Snapdeal, a number of outraged users on social media started a campaign to downvote and uninstall the company's mobile phone app. The intention was to financially penalise Khan for expressing his views. They gave their initiative the hashtag #AppWapasi, echoing the #AwardWapasi label that had been used by social media users to describe the decision by prominent Indian writers and filmmakers to return their national awards to protest what they believe is the intensifying climate of intolerance in the country.

A number of news outlets ran stories that seemed to suggest Snapdeal was suffering as a result of this campaign. Snapdeal itself, though, remained unfazed and simply characterised Khan’s comments as “personal”.

For me , now buying anything from Snapdeal is no less than indulging into an anti national activity because Aamir Khan endorses it #AppWapsi

There was, however, an ironic twist in the tale. Driven by the publicity that the #AppWapsi outrage had gathered, Snapdeal’s app actually went up in the rankings. 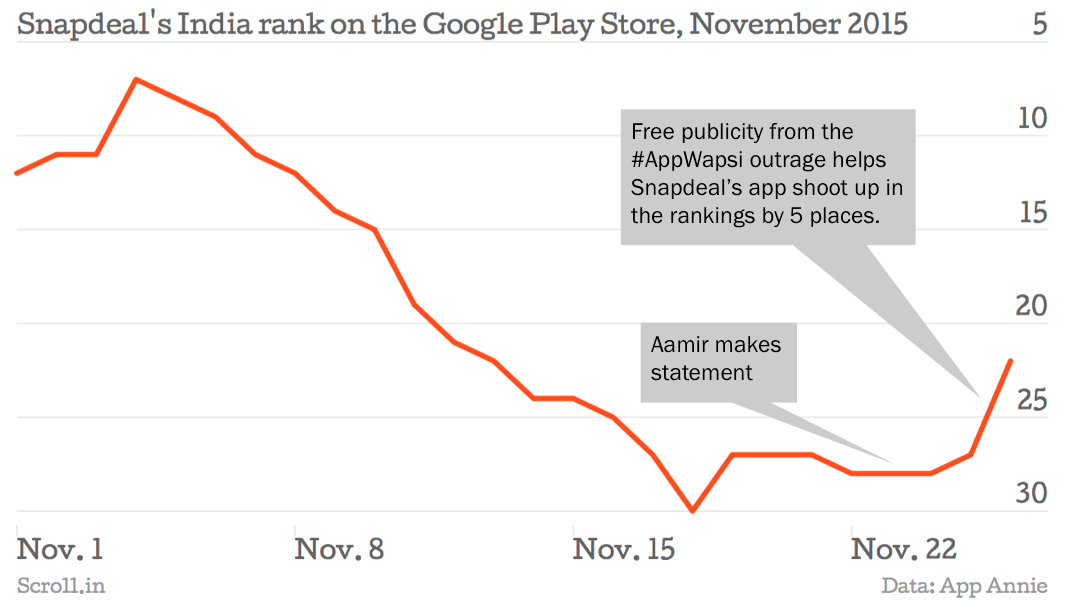 On November 23, the day Khan made his statement, Snapdeal’s India rank in the Google Play Store was 28. It held this same rank on the next day. On November 25, as the outrage gathered force and social media started to trend #AppWapsi, its rank went up by 1 place, to 27. On November 26, with #AppWapsi peaking, Snapdeal’s app went up five places in the India rankings – its single highest jump over the previous 30 days.

In sum, between November 23 and November 26,  Snapdeal’s India rank in the Google Play Store rose by 6 places from 28 to 22.

As PT Barnum, the 19th century American circus magnate put it, there really is no such thing as bad publicity.