The dish, a staple on The Bombay Canteen menu since we opened, highlights two wonderful, local Indian ingredients – arbi or colocasia, which is a tuber, and mogri, or rat tail radish, a pod from the radish family. This dish is inspired by a Sindhi dish called tuk in which the vegetable is fried, smashed and fried again until crisp. What you get as a result mimics a flat chaatwala’s puri, so we decided to top it with spiced yogurt, tamarind chutney and a kachumber to resemble a sev puri. 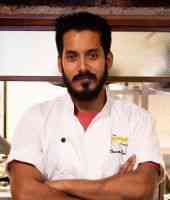 An alumnus of the Culinary Institute of America, Chef Thomas Zacharias worked at the celebrated New York three-star Michelin restaurant La Bernardin under Chef Eric Ripert before returning to India. He first helmed the kitchen at Olive Bar and Kitchen in Bandra, Mumbai, then became the Executive Chef at The Bombay Canteen. Currently Chef-Partner at The Bombay Canteen, Zacharias’ food philosophy involves showcasing regional Indian cuisines in a contemporary avatar, celebrating local and seasonal ingredients, and creating memorable food experiences around Indian cuisine. He travels extensively around the country to explore regional cuisines.