We discovered watana rassa at a restaurant called Cafe Real in Panjim. A Saraswat Brahmin dish, it was a thin rassa made with dried white peas. The server recommended we eat it with buns made of bananas – and rightly so. The combination of savoury-spicy rassa with sweet buns was so brilliant that I immediately knew we had to add it to our opening menu. It has never left O Pedro’s menu since. 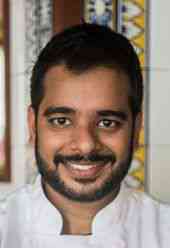