Contribute Now
Ad
“My husband’s soul rises in me like a shaman when I speak about him to strangers,” said Fatima Begum, sipping her namkeen chai. It has been nearly 25 years since her husband Mansoor disappeared from their house in Bandipora in Kashmir. Mansoor was educated and often wrote poetry. Fatima, once illiterate, has learnt to follow the cadences of poetry and ghazal, as if to keep Mansoor in remembrance.

Fatima, after severe financial difficulty, found work as a cleaner at a government school under the governmental compassionate employment scheme. It isn’t an ideal situation, but she seems to take joy in the fact that her children love go to school. Yet, what Fatima can’t evade is the epithet of half-widow. “Kashmir is always replete with jung [war] and us [half-widows],” she said. “But life must go on.”

The Kashmiri half-widow has been often likened to the state of Kashmir. She occupies two spaces but is welcome in neither – she is both a wife and a widow, and therefore neither. The unique category emerged in the Valley over the past 25 years of conflict and insurgency. Between 8,000 and 10,000 Kashmiri men, combatants and non-combatants, have simply “disappeared” since the armed struggle for azadi began in the 1990s. More than half of these men were married, and it is their wives who are called half-widows. 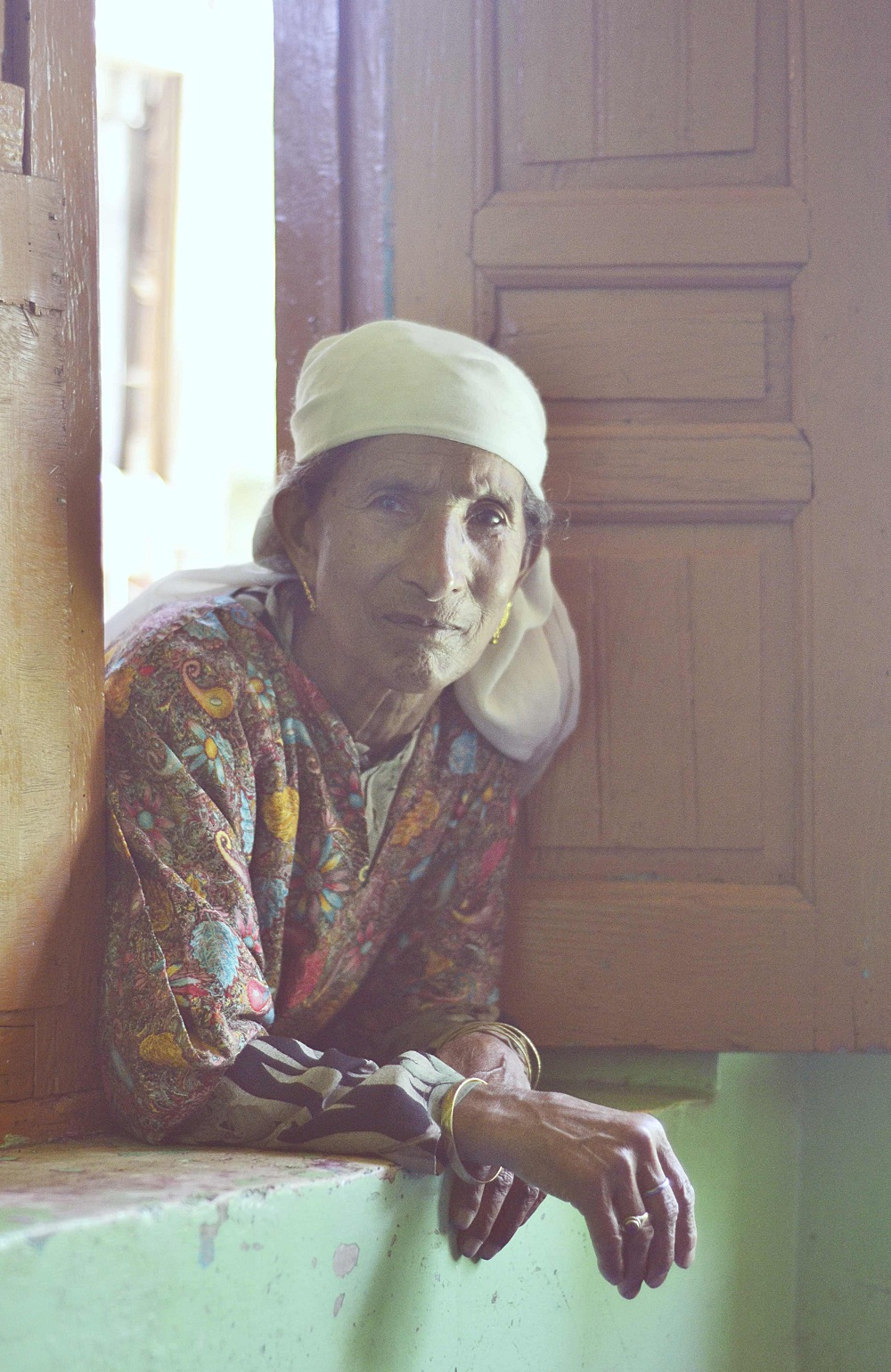 After her husband Mansoor’s disappearance, Fatima from Bandipore has picked up the pieces and found peace in poetry. All photos by Deya Bhattacharya

The crime of enforced disappearance is not legally recognised in India, and in Kashmir, cases of disappearances have been swept under the carpet under legal fictions of missing cases or as deaths. For the half-widow, this legal murkiness is the biggest enemy. Very few of them understand the difference between the terms “missing person” and “enforced disappearance” or “First Information Report” and “Missing Persons Report”.

Unlike in India, there is no ambivalence in international law. Article 24 of the International Convention for the Protection of All Persons from Enforced Disappearance defines victims of the crime as both the disappeared and those who have suffered as a direct result of the disappearance. So the half-widow in Kashmir, in this sense too, is a victim of enforced disappearances. The loss of a breadwinner hurls her into the quicksand of financial instability, where she often has to take up a low-paying job just to earn a livelihood.

Her life, more often than not, languishes in the ritualistic rigmarole of appearances at police stations, human rights commissions, courts, army camps and a labyrinth of paperwork. It becomes a pursuit of the husband, whose disappearance is an uncertain category. And in this pursuit her story, unfortunately, gets lost. 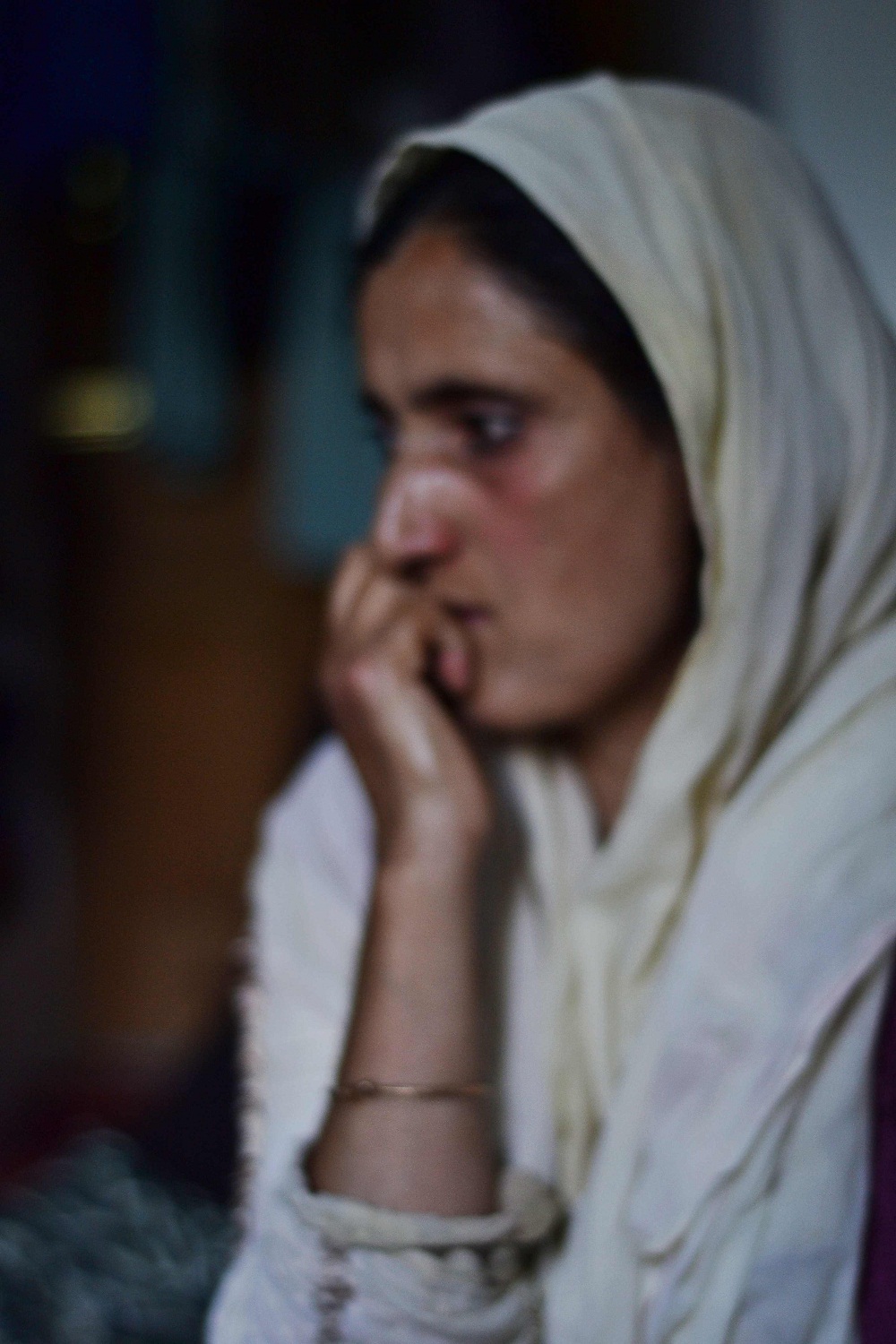 A relentless enigma, Haleema’s life revolves around attending protests in Srinagar. She makes sure she travels from Bandipore every time a demonstration is announced.

Fatigued Haleema Begum of Bankoot, Bandipora, clutched an aliquot of medicines while being interviewed. Her brother-in-law, a government teacher, had already given a potted history of her life: the security forces allegedly picked up Haleema’s husband – his brother – some 17 years ago; the police had been so uncooperative that no complaint could be filed; Haleema has five children and every one of them is dependent on him; Haleema often went all the way to Srinagar for protests that have no consequence at all. The pointers went on, undisturbed by Haleema’s silences. “Five children. She has five children! My wife and I just have one,” he said. Throughout the conversation, Haleema was defiant – she seemed to have a lot on her mind but was reluctant to reveal her opinions.

While Haleema Begum from Bankoot was an enigma, Halima Begum from Kulangam in Kupwara was her obverse. After her husband Ashfaq was taken away by unidentified men 15 years ago, Halima was crestfallen at first, but as time passed, she took up unskilled labour to build a house and put her children through school. Halima lives with her destitute mother and her three children in a small pucca house. She was calm when she said that it is the everyday living, without faltering, that was necessary. 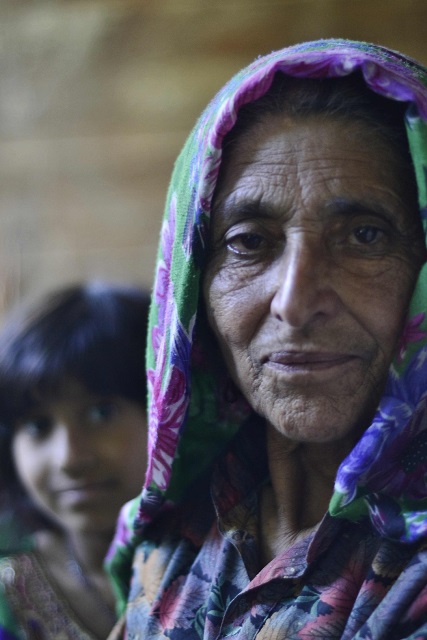 Arshia Bibi, whose son disappeared in 2003, is determined to stay alive and healthy, and struggle for her grandchildren.

In Kupwara, an old couple, Safdar Ahamad and Arshia Bibi, whose son disappeared in 2003, are wrought with worries. Their home is a small thatched hut with a small garden where crops are grown and visitors, mostly journalists and development workers, entertained. Arshia said her son’s wife, the half-widow, does not care for them, that she instigates her grandchildren against the old couple. The disappearance has frayed the familial bonds, and she suspects the daughter-in-law will leave their house permanently if the ex gratia relief from the government arrives. Arshia has decided to live on and struggle for her grandchildren – “Allah took my son, but I can live for them.” 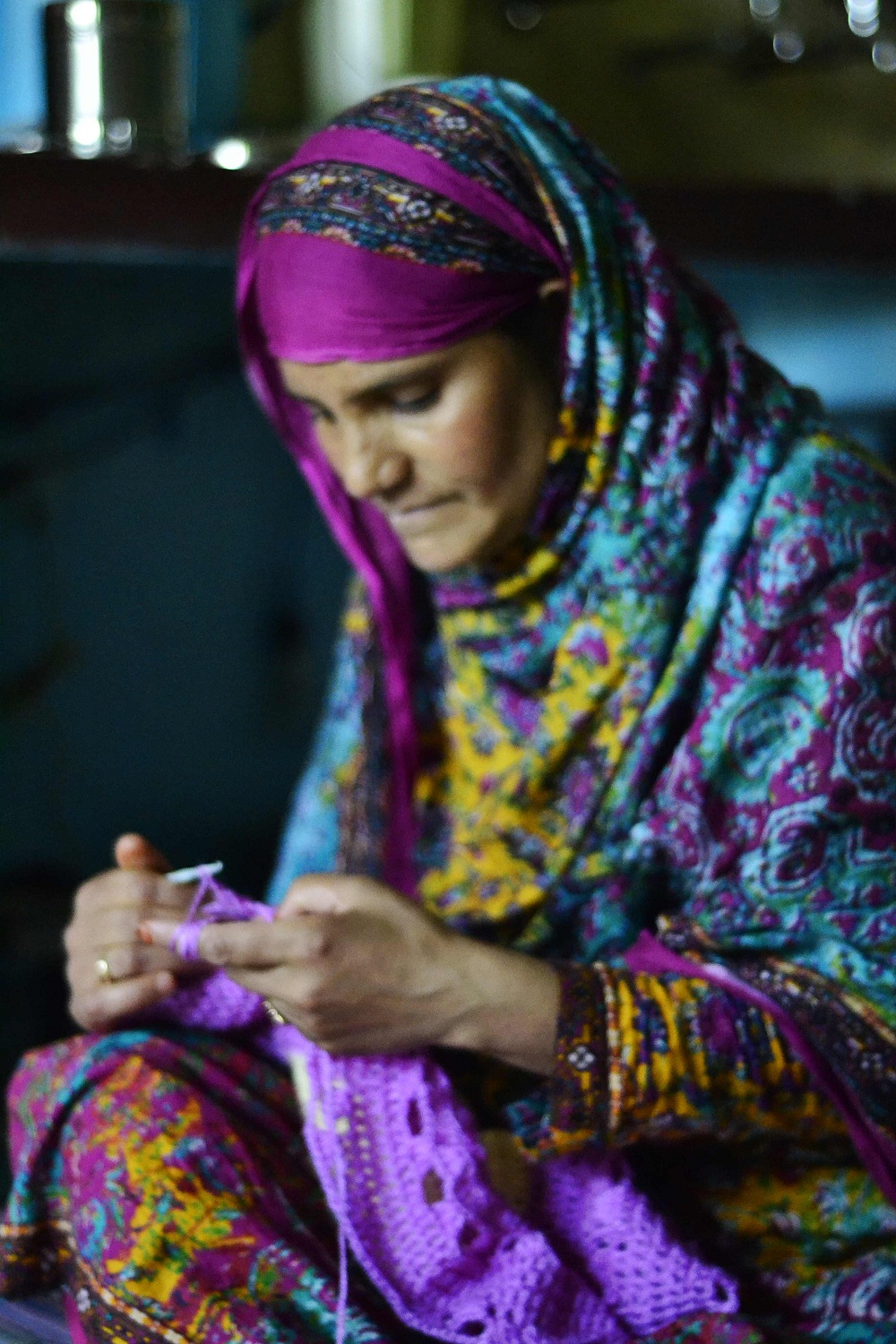 Tasleema has learnt to move away from the conflict. She finds solace in her crochet work.

Faux-taffeta curtains are the only things between the world and Tasleema’s infinitesimal room in Srinagar. Tasleema refused to dwell on her husband’s disappearance in 2000 during the interview. Instead, she worked on her crochet pieces with acuity, as her son played outside. She has made a small part-time business of knitting these crochet-pieces and selling them for additional income. Her love for the radio is unparalleled – “the radio is my boyfriend,” she chuckled as she knitted.

For these women, the conflict has not yet ended. Trapped between political agenda and everyday responsibilities, half-widows signify a failure of the state. Fatima Begum, the poet’s wife, explains best what it is like to survive a disappearance:

“Imagine yourself in a stranger-land, all of a sudden. In a land, where the terrain is jagged and errant, and where no plants grow. Gradually, you cultivate trees, flowers bloom; you make this land beautiful, you make this land yours. And then one night, a wild storm comes in while you’re asleep; it undoes all your hard work. The land is no longer yours, it’s a stranger-land again. But what can you do? Your duty is to pick out the weeds, and the dead, withered leaves, and make the land liveable again. The hardest thing to do is to continue. Everyday, routine life is difficult, believe it or not. I have still not come to terms with my husband’s going, I probably never will. But to stop crying, to get out of bed, to cook, to send my children to school felt like an achievement at that point of time. Ordinary life was the most difficult thing to come back to.” 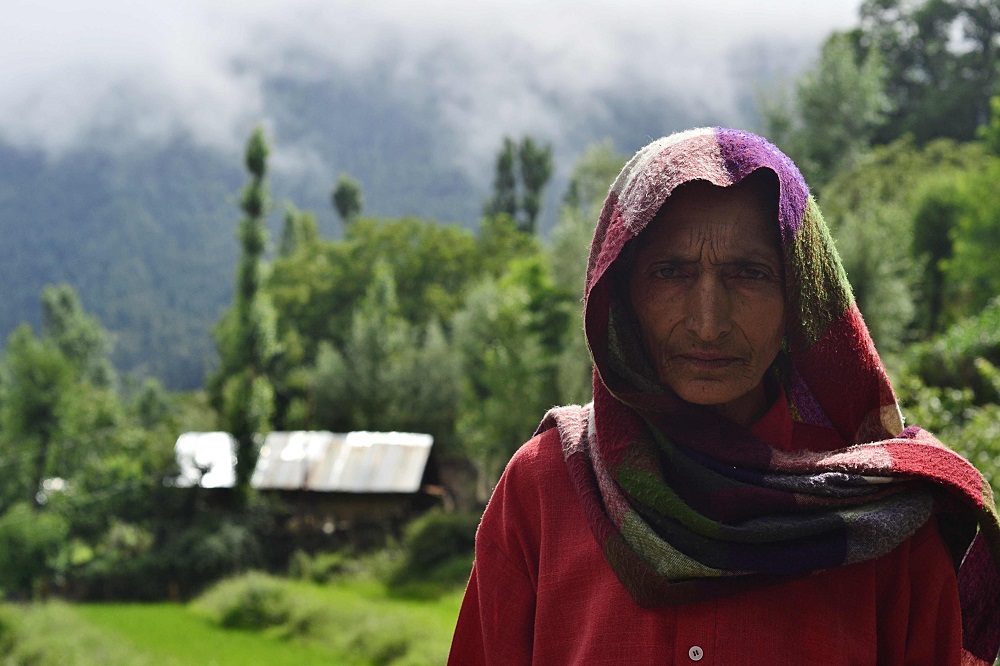 A poignant metaphor for Kashmir, the half-widow occupies two spaces but is welcome in neither. 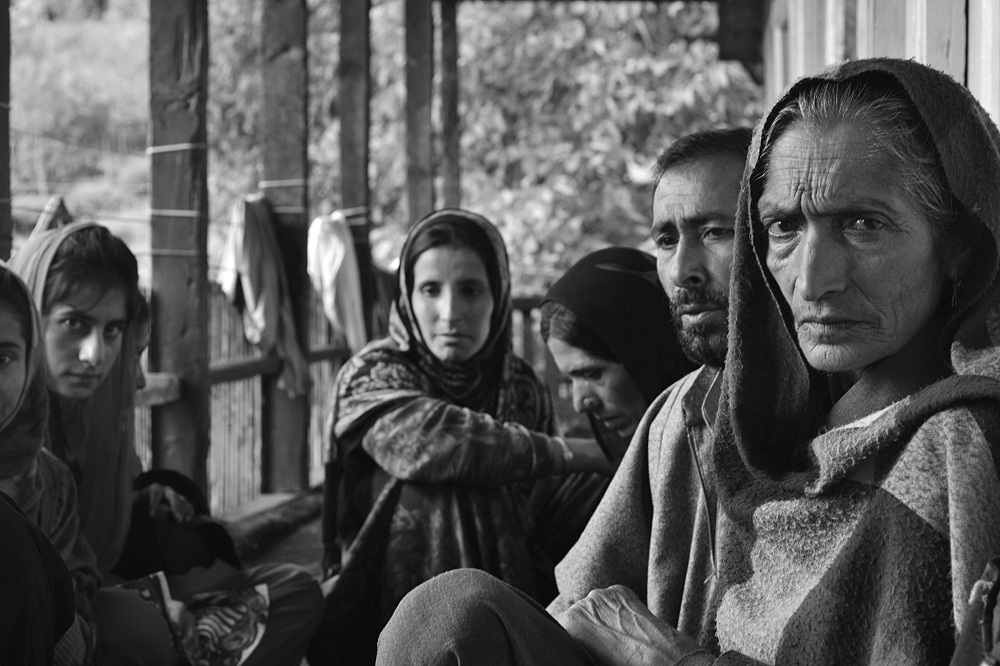 The half-widow is often pushed to become the head of the family, the lone breadwinner after her husband disappears. 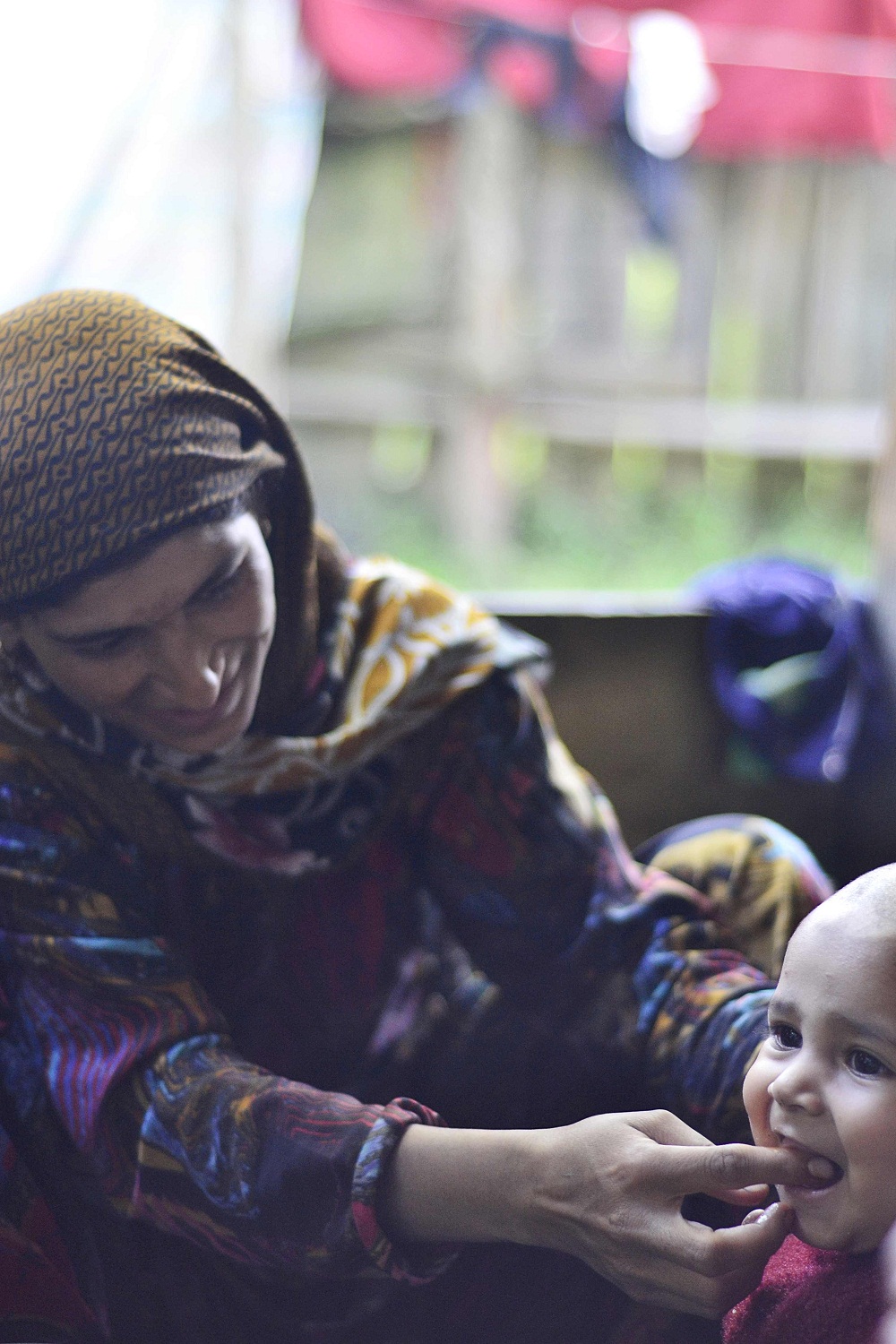 At the same time, she remains the family's caregiver. 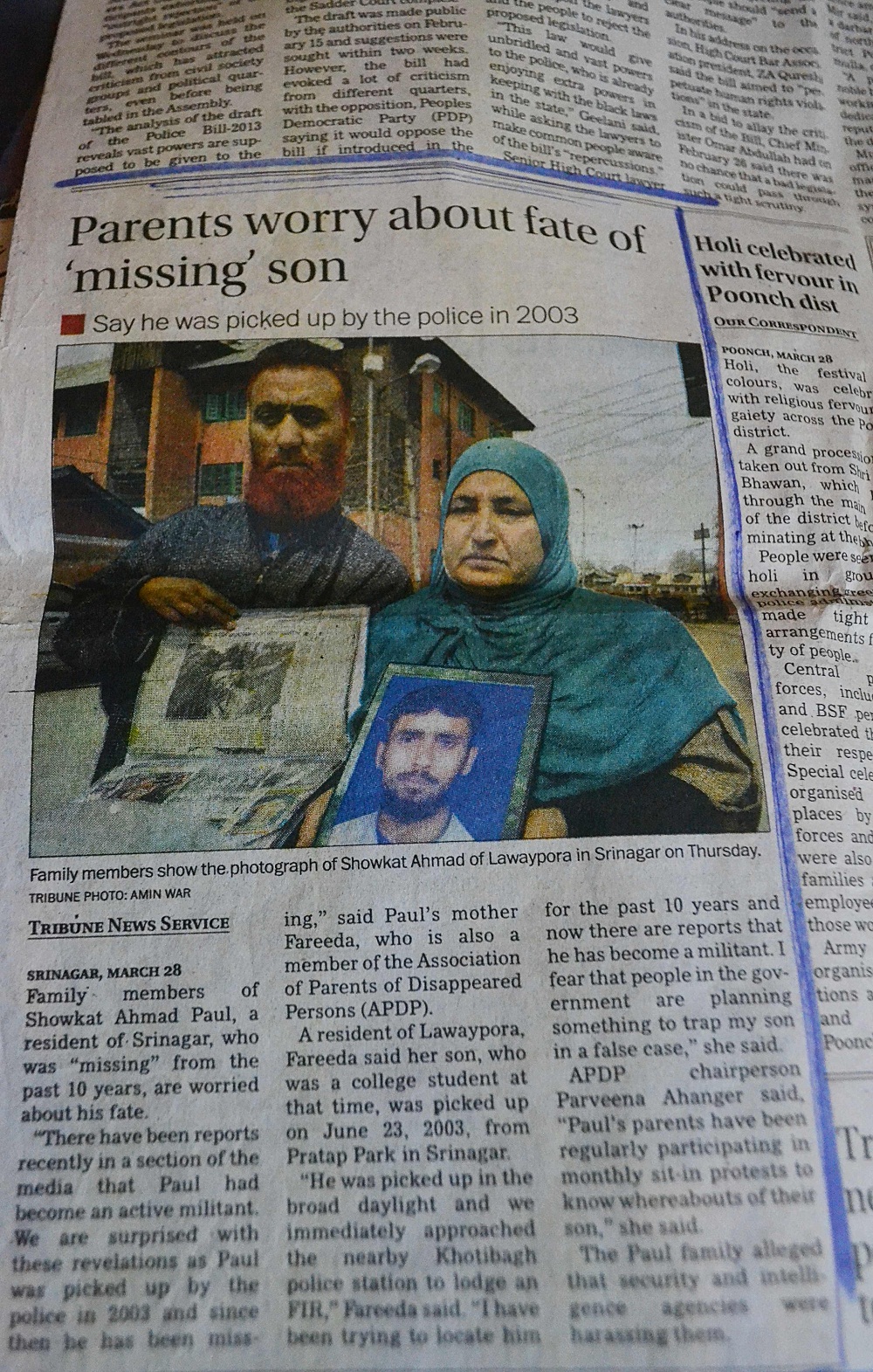 Half-widows and mothers of the disappeared often find themselves in the ritualistic rigmarole of visits to police stations, human rights commissions, courts, protests. 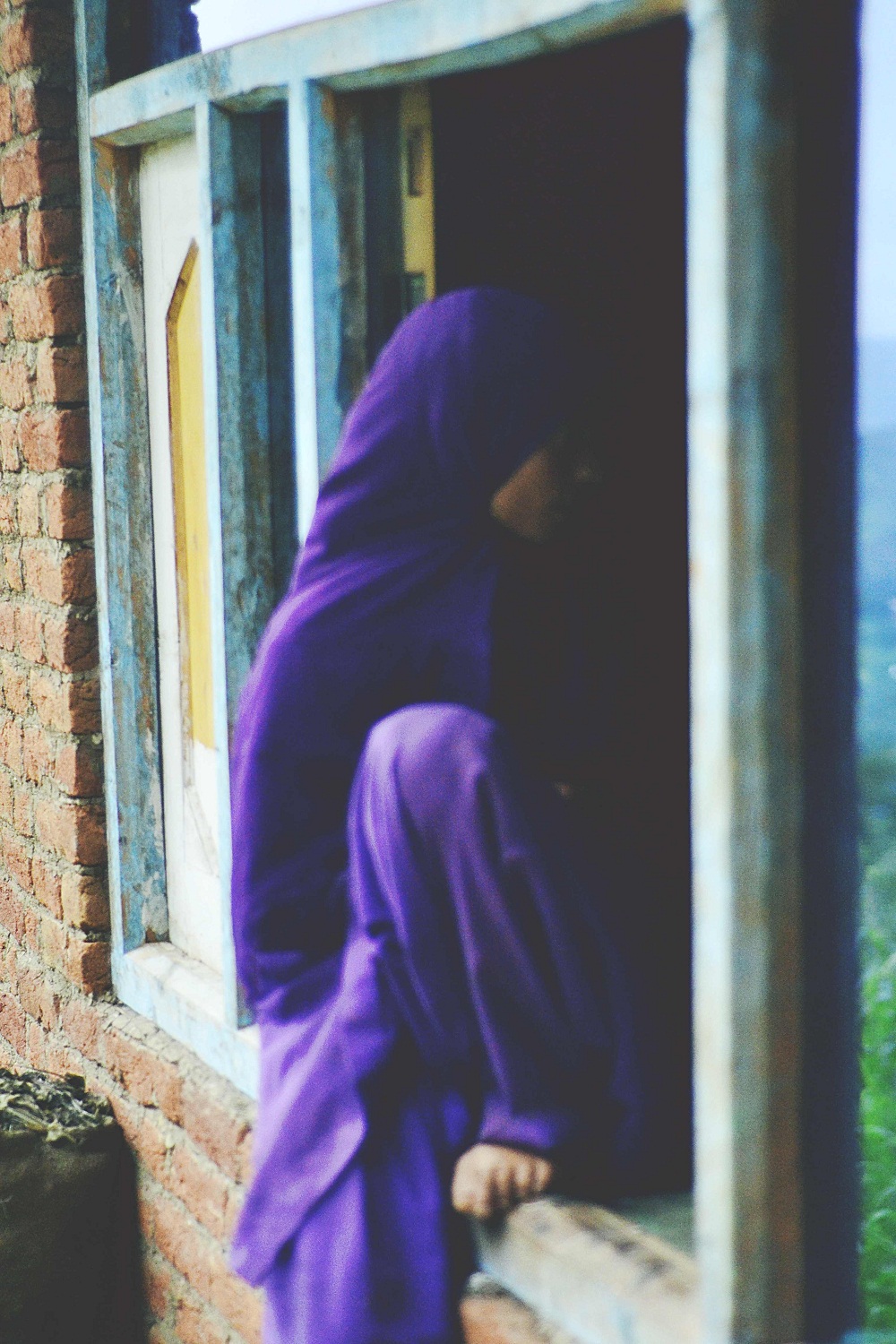 The half-widow’s battle is not only against her husband’s disappearance, but also against a system that pushes her into a non-justiciable category.