Become a Member
Ad
India’s 150 million Muslims will have only 22 representatives in the 16th Lok Sabha.

As the Bharatiya Janta Party forms India's first single-party majority government in 30 years, Muslims have been eclipsed. Only 4.05% of the members of the new Lok Sabha are Muslim – the lowest figure in 50 years. The 2009 polls saw 30 MPs being elected. Muslim representation in the Lok Sabha has hovered at around 5-6% for the last 25 years, with the highest number of 49 MPs (10%) being recorded in 1980.

This year's figure is a result of the decimation of the Congress, the Samajwadi Party and the Bahujan Samaj Party, which had driven Muslim participation in recent elections

The state-wise contribution to Muslim representatives is not encouraging – all the 22 MPs hail from only seven states and one Union Territory. Fourteen states have not elected a single Muslim MP over the last 25 years.

In an unexpected turn of events, Uttar Pradesh has no Muslim MPs for the first time since Independence. This time, 34 parties had fielded 144 Muslim candidates in the state, which has an 18.5% Muslim population. Over the last 25 years, UP has sent more Muslims to the Lok Sabha – 45 – than any other state. The UP result is surprising because in the 2012 assembly elections, Muslims had achieved for the first time a representation (17%), close to their population (18.5%).

The polarisation of voters on religious lines in Western Uttar Pradesh, which has the highest ratio of Muslim voters, seems to have paid off for the BJP, as they won everywhere, including in constituencies with 40% or more Muslims.

West Bengal has elected 8 Muslim MPs, more than any other state this year, followed by Jammu & Kashmir (3) and Bihar (4).

Maharashtra, with a Muslim population of around 11%, did not vote in any Muslims in this time. In fact, the state has sent only one Muslim to the Lok Sabha since 1989. 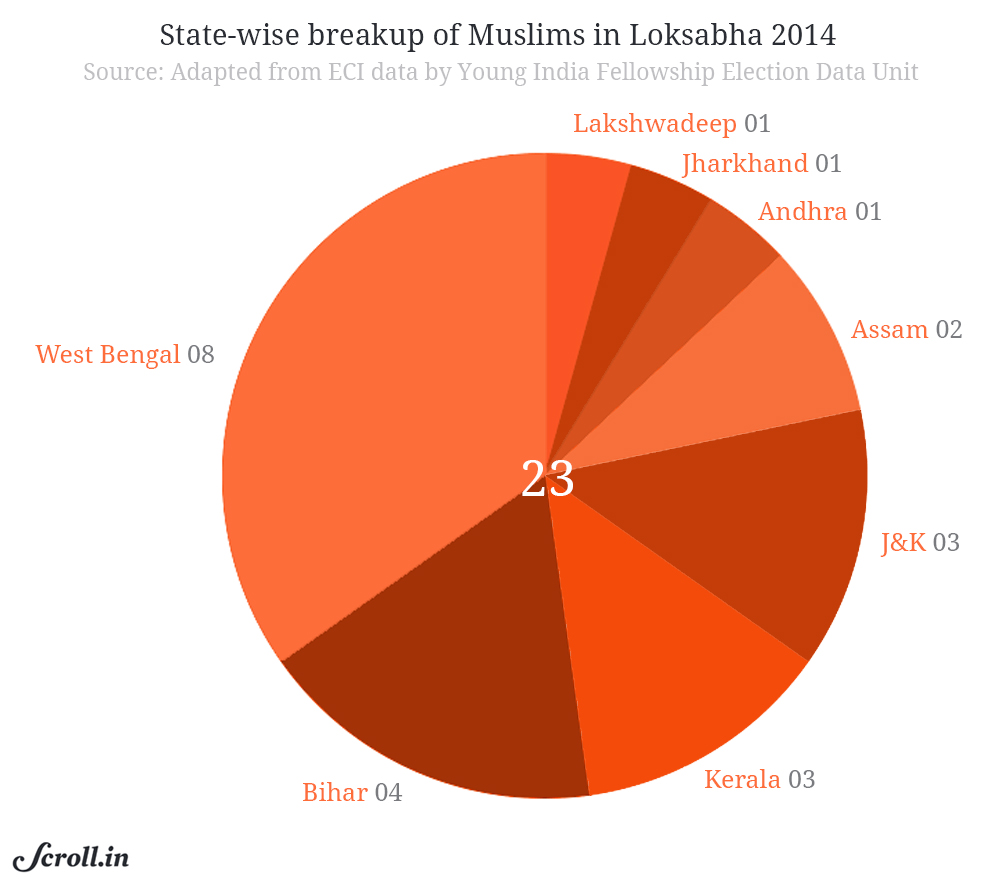 The BJP fielded seven Muslims in its list of 428 candidates (1.63%) – none of whom won. The Congress pool of 462 candidates featured  27 Muslims (6%) , of whom three won. The BJP lost its sole Muslim MP Shahnawaz Hussain from Bhagalpur in Bihar, to Shailesh Kumar of the Rashtriya Janata Dal with a margin of 9,485 votes. 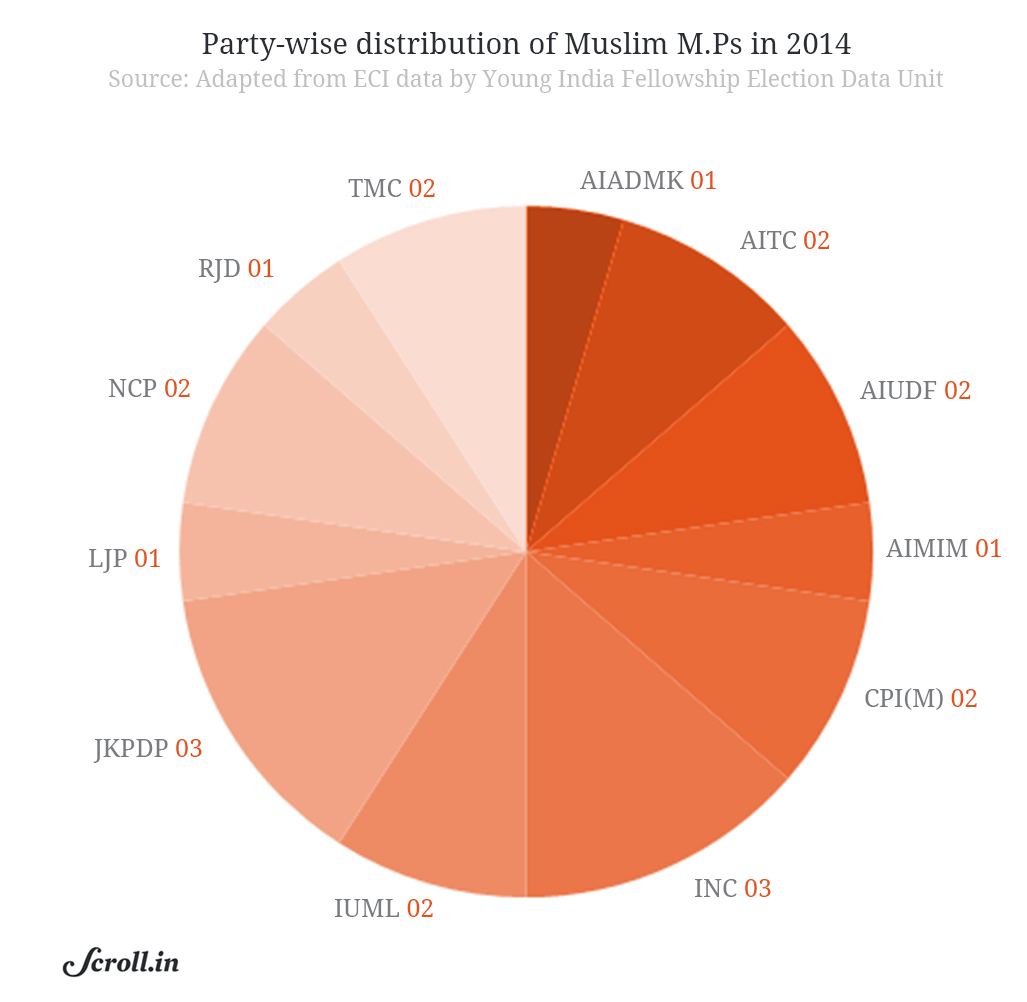 Among the seven successful Muslim incumbents was All India Majlis-e-Ittehad-ul Muslimeen’s Asaduddin Owaisi, who scored a hat-trick in Hyderabad. He defeated his nearest rival Bhagvanth Rao of the BJP by a margin of nearly two lakh votes. Veteran Muslim parliamentarian E Ahmed of the Indian Union Muslim League also walked away with a winning majority, towards his seventh innings in parliament.

Moving beyond the arithmetic, what does the BJP victory hold for India’s minorities? There are fears among the community that a BJP-led government will neglect them, thus reinforcing their sense of marginalisation. Others fear that the BJP might take advantage of its majority to pass contentious laws to proceed with building a Ram Mandir in Ayodhya over the demolished Babri Masjid, or to impose a uniform civil code. Regardless of these fears, the fact that India’s largest minority community does not have an effective voice in the people’s assembly does not bode well for India's pluralism. 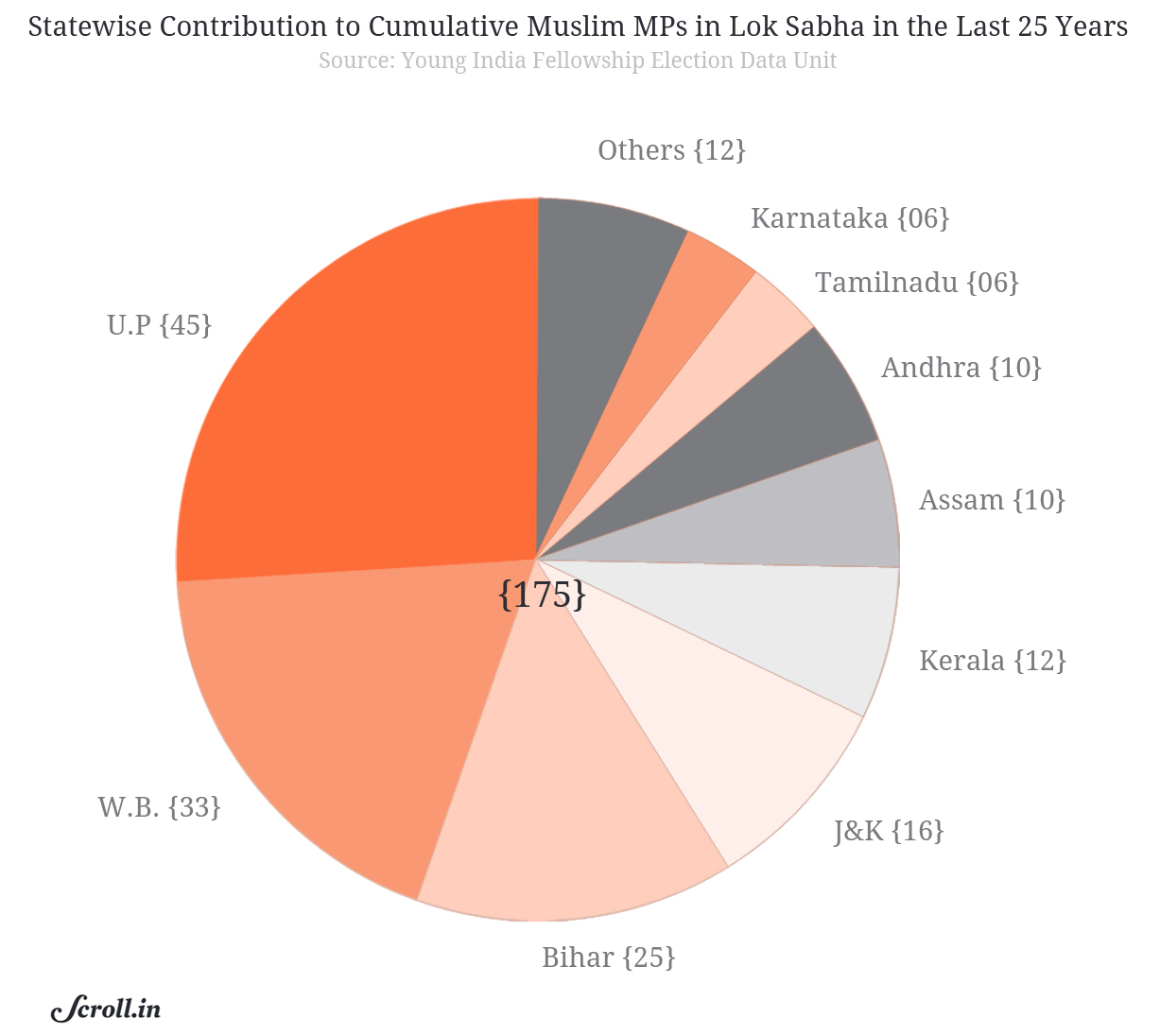 BJP's panna pramukh strategy in UP yields the ultimate dividend