Contribute Now
Ad
Flying into Mumbai on a late evening flight feels like landing on a giant LED circuit board. Glowing from horizon to shimmering horizon, Mumbai seems endless and unconstrained. But like all complex organisms, the metropolis of insomniacs actually has a nucleus. 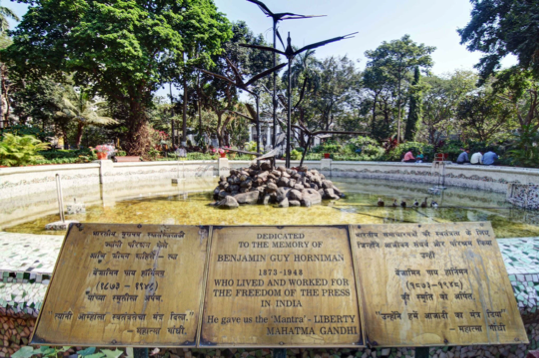 Horniman Circle lies in the epicentre of the historic precinct of Bombay Town.

Once on the very edge of Bombay’s harbour but now receded inland as a result of the port expansion, lies Horniman Circle. It is planted on the east-west axis that starts at the Marine Drive sea face, goes past Churchgate Station, slices through Flora Fountain and hits the Town Hall smack in the centre. Initially known as the Bombay Green, it was a large muddy ground on which cattle grazed. Charles Forjett, the very energetic Police Commissioner of the 1850s decided to clean up the place and converted it into a gracious garden that was named after the Governor, Lord Elphinstone. If not for the chaiwallahs and the double-storeyed garbage dump occupying prime space opposite an international boutique, it could pass itself off as Park Crescent in London. 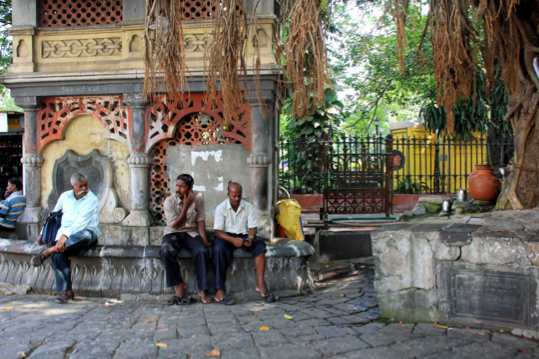 In the 1850s, cotton merchants would gather under this banyan tree.

Sitting on the crumbling brick wall that encloses an ornate fresh water well, in the shadow of an ancient Banyan tree, you are engulfed in a sense of history. This is the tree under which Indian cotton merchants would meet in the 1850s and conduct their daily trades. One day, 22 of them contributed a rupee each and started the Native Stock Exchange, which blossomed into the Bombay Stock Exchange. 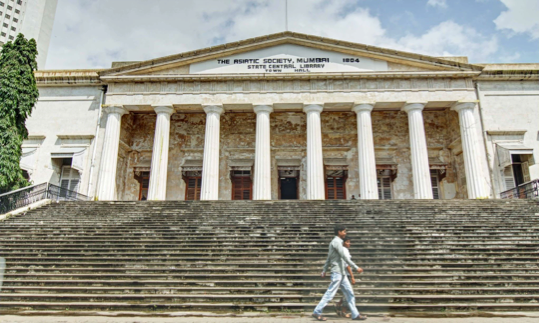 The Town Hall and the flight of 30 steps.

Due east lies the Town Hall which houses the Asiatic Library, the steps of which are well known to movie buffs. Raised on a high plinth, this structure with its plain Classical façade supported on eight Doric columns is a favourite with location scouts. Every winter, it doubles up as a grandstand seating for classical music concerts. Thirty weathered steps transport you to a world of rare books and ancient manuscripts, including one of the only two known original copies of Dante’s Divine Comedy. Impossibly tall, louvered teak wood doors filter in the light of the setting sun. 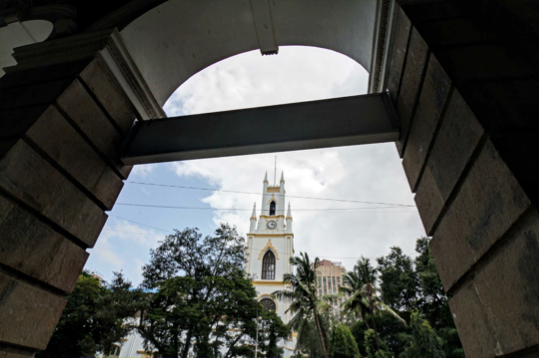 The St Thomas Cathedral is the oldest piece of British-era history in this precinct.

The most historic and certainly most ancient structure of them all is the St Thomas Cathedral, in the south western corner. A solemn structure, in a severe unornamented design, the walls of which are clad in grieving marble, it took an inordinately long time to build. Started off in the mid 1600s by Governor Gerald Aungier, it continued as work in progress over the next 200 years. Hand-smoothened plaques in white marble are dedicated to the courage of the men who lost their lives while rounding the Cape of Good Hope or perished to the ferocious natives in Cawnpore, or simply succumbed to the scourge of malaria contracted on the verandas of tea plantations. The Rt Rev Thomas Carr, the first Bishop of Bombay, beatifically clasps his hands near the pulpit as he rests in eternal peace. 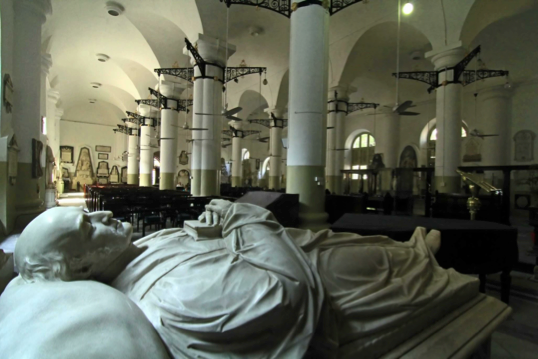 The oldest structures in modern Mumbai, however, lie behind forbidding walls, guarded by men in epaulettes and white uniforms. On naval property behind the Asiatic Library stands the Portuguese Manor House that later became residence of the first governors of Bombay. Out of bounds for commoners and especially photographers, this area has been sparingly documented and rarely photographed. 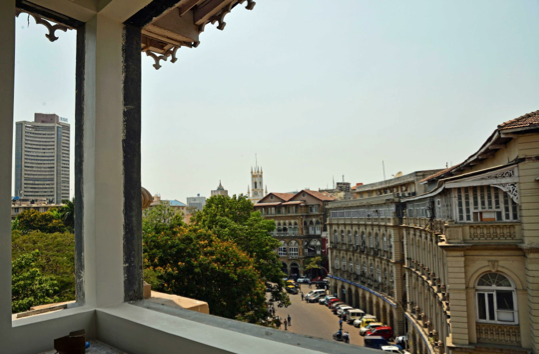 The modern structure that houses the BSE stands only a few hundred yards from the banyan tree where it all started.

The next time you buckle up in preparation for your landing in Mumbai, look at that glowing expanse around you and marvel at the thought that it all started in an area not much larger than a couple of football fields. 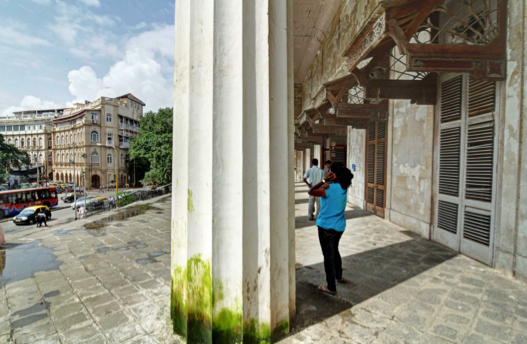 See more of Manjunath Shenoy's photographs on his Facebook page.