Contribute Now
Ad
Ten people lost their lives in north Delhi when a 50-year-old, four-storey building in Inderlok collapsed on Saturday morning. The suspected cause of the collapse was some illegal construction on the adjacent plot. The Delhi Police has arrested the developer of that plot for causing death by negligence. On the same day, another 10 people died in suburban Chennai, when an 11-storey building that was still under construction came crumbling down after a bout of heavy rain. The two accidents have left dozens of people injured and rescue operations in both cases are still underway.

Two major, fatal building collapses in one day is appalling, but given the annual statistics for structural collapses in India, the frequency of these unnatural calamities is not surprising either.

Every year, India loses an average of 2,658 people to different kinds of structural collapses; that is around 7 deaths a day. 2011 saw the highest fatalities in ten years, 3161 deaths. 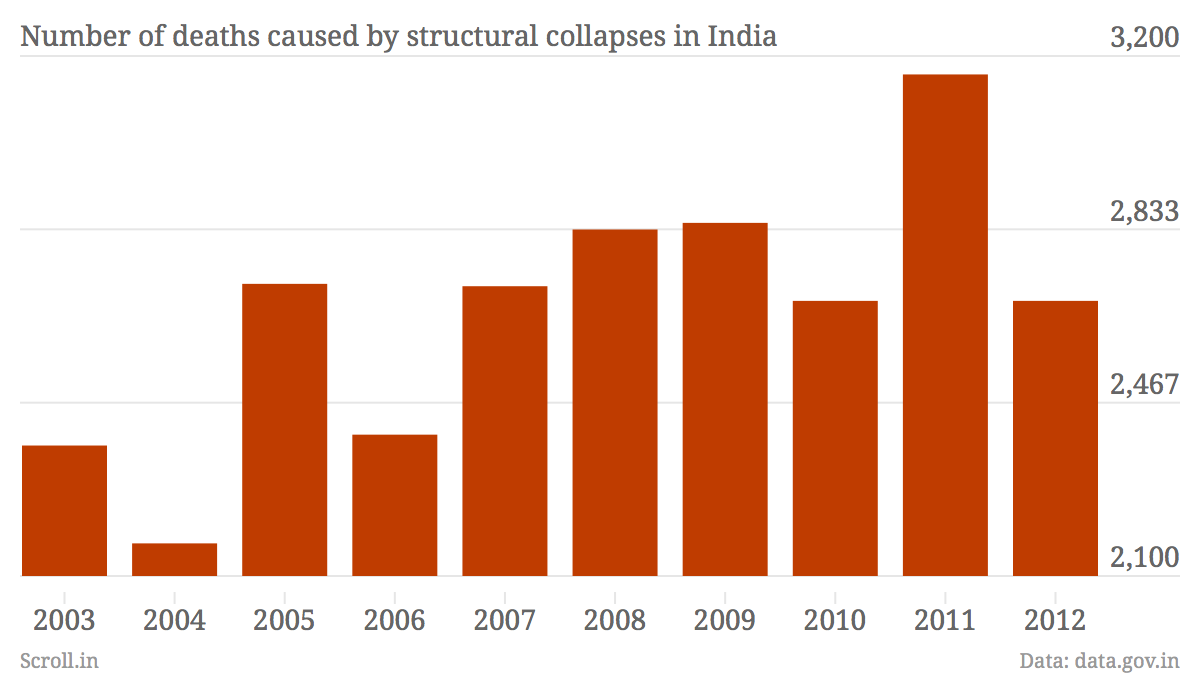 The structural collapses recorded in the official data include broken houses, buildings, bridges and even dams, among others. Of these, most are houses and buildings, accounting for an average of 1,260 deaths a year. Here are the figures for 2012: 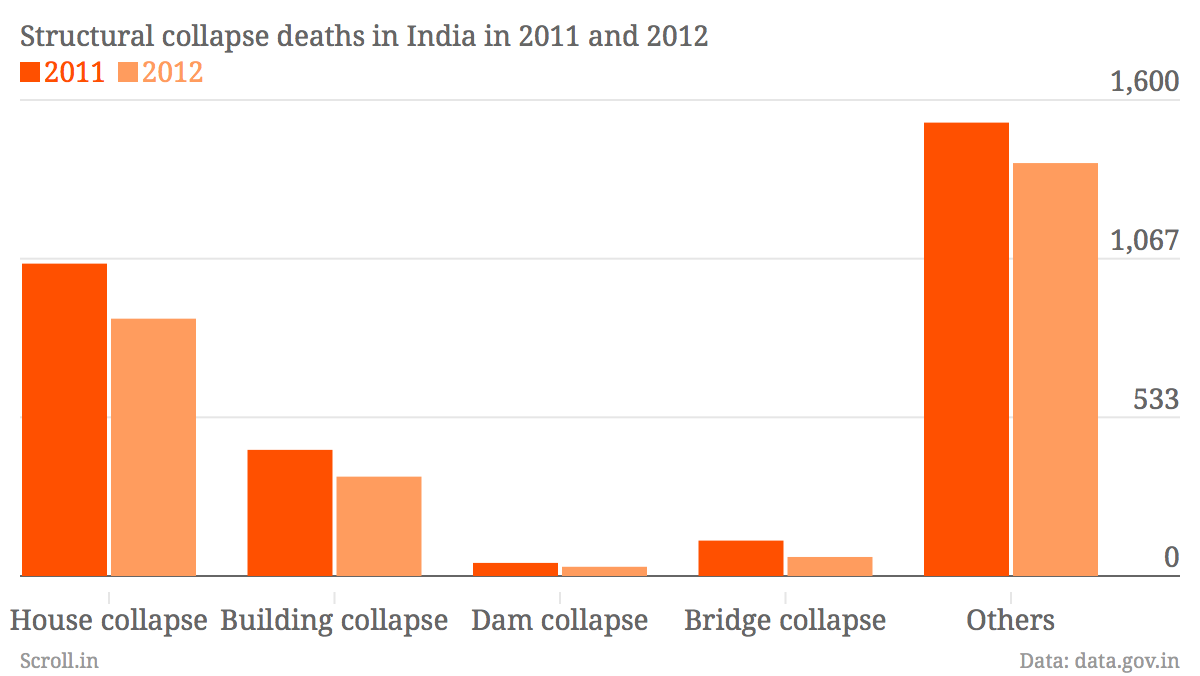 In the case of buildings and houses, most accidents tend to occur in populated cities and towns, where dense living conditions result in higher fatalities whenever a mishap occurs. In Mumbai alone, there are reports of a major building collapse every few weeks. In 2013, the city saw two of its deadliest accidents in recent times. In April, 74 people – largely construction workers – were killed in a building collapse in the suburb of Mumbra; in September, 61 people died in the heart of the city, in the collapse of a municipal building in Mazgaon. In both cases, the structures that gave way were not very old – in fact, the Mumbra building was still under construction and had even not received an occupancy certificate from the local authorities. 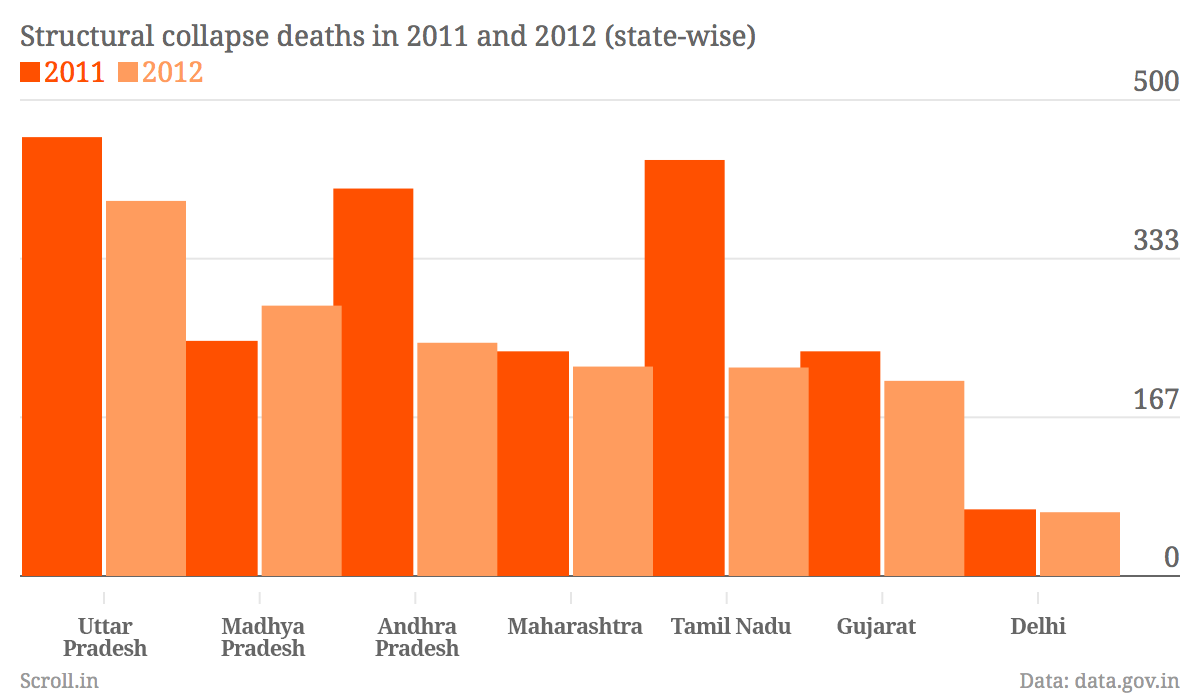 Builders and residents of structures are often careless about the quality of construction material and the subsequent maintenance of a finished building. Once an accident has occurred, the response from disaster management authorities is slow, which impacts the number of lives lost.

“In India, we have a tendency to ignore small signs of danger and just wait for a situation to get really bad,” said Rita Savla, the founder director of Radhee, a Mumbai-based advocacy group for disaster management issues. “In the case of buildings and other structures, residents must be responsible enough to get structural assessments carried out every few years, so that small cracks can be filled in time.”

It is only recently, says Savla, that builders are being pulled up and arrested in metro cities like Delhi and Mumbai for causing death due to negligence. Across most of India, however, the creators of a buildings are hardly held accountable for the collapse of structures before their time is due.

The most significant way to reduce the number of building collapse deaths, however, would be to respond to emergencies faster and more efficiently. Unfortunately, Indian authorities are worryingly slow to respond to distress calls about collapses. “Internationally, the recognised standard time for finishing basic rescue operations at an accident site is one hour,” said Savla. “In India, authorities sometimes take two to three days to rescue people trapped in debris.”