Oct 20, 2014 · 12:24 pm
Praveen Khangta and Gilles Verniers
The Bharatiya Janata Party’s performance in Maharashtra may have fallen short of its expectations. With 28% of the vote share, it failed to attain a majority in the state assembly by 23 seats. But given the context of the campaign and the formulation of a new daring strategy, its showing has been impressive.

For the first time in 25 years, the BJP went alone to the polls and succeeded not only in grabbing seats held by its arch-opponents – the Congress and the NCP – but also of its former ally, the Shiv Sena.

The divorce between the Congress and its traditional ally, the Nationalist Congress Party, certainly went in favour of the BJP. The crumbling of the alliance contributed to the political arena becoming even more fragmented, reinforcing the disproportionality effect of the electoral system. 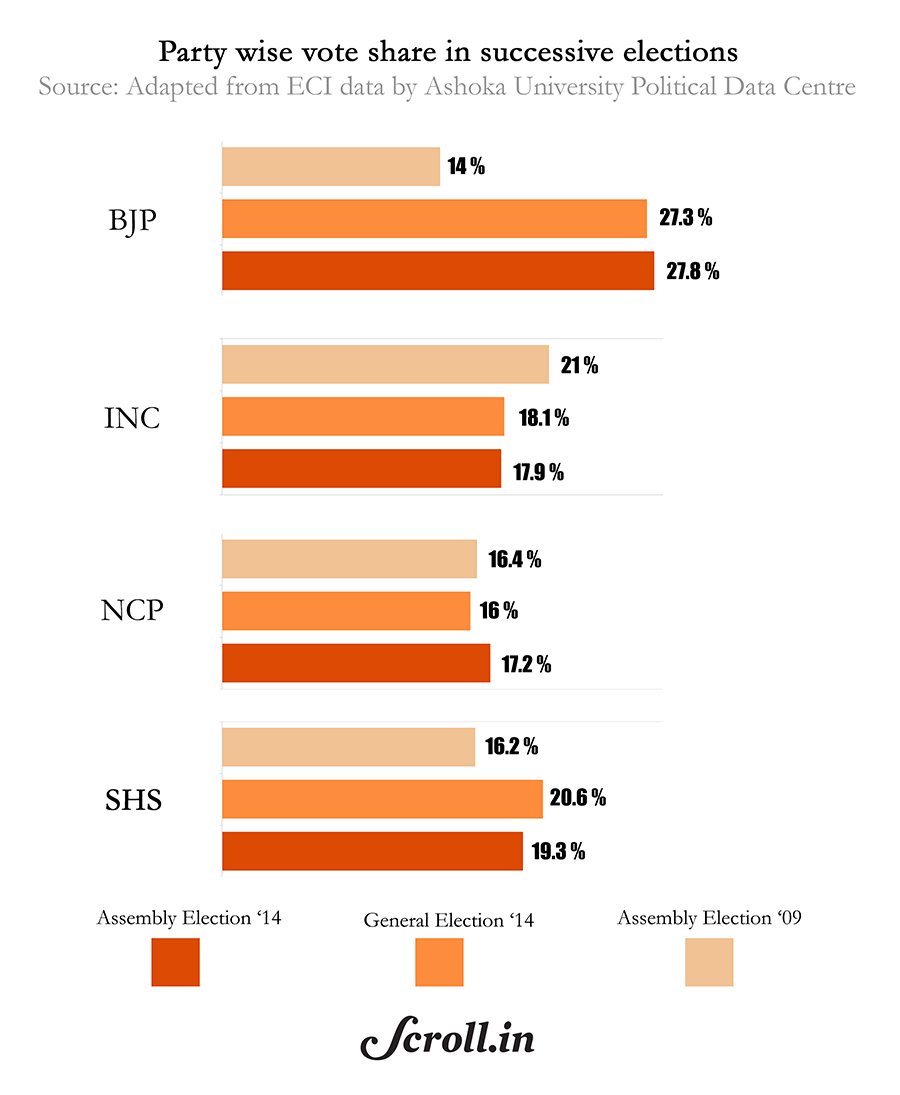 Compared to their performance in the 2009 elections, the Shiv Sena gained from the break-up with the BJP, . The Congress-NCP former combine lost the larger part of their seats to Shiv Sena candidates, while the Shiv Sena lost a large part of the seats it had won in 2009 to the BJP.

Besides the major differences caused by these multiple divorces, this assembly election bears a striking similarity to the general elections in May. As in the case of the Haryana elections, the variations in results for all major parties are very small, within 1% or 2% of vote swing for all parties.

As in May, the BJP was able to take advantage of the fragmentation of the electora arena. As a stand-alone player in October, it vampirised a former ally diminished since the disappearance of its historic leader in 2013. The presence of incumbents quarrelling with each other facilitated further the victory. The volleys of mutual accusations both Congress and NCP leaders threw at each other before and during the campaign ensured their mutual destruction.

As in the case of Haryana again, and as in the case of the May elections, the BJP’s victories – as well as those of the Shiv Sena – were quite decisive. Victory margins were very high for both parties, above 10% in about two-third of their seats, a remarkable feat in a four- and sometimes five-corner fight. 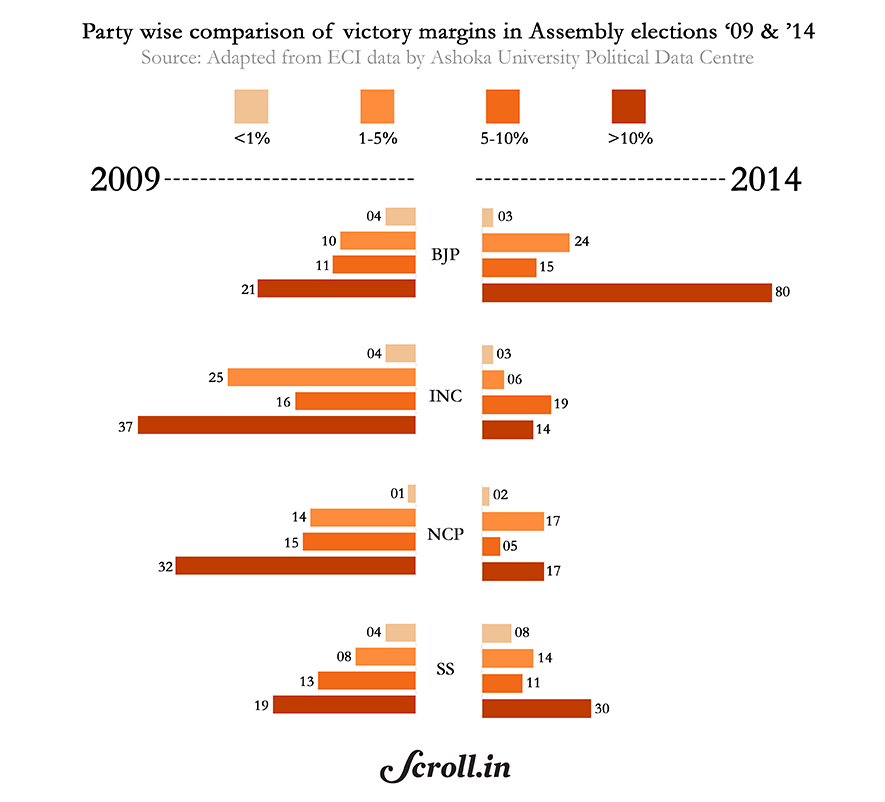 However, despite the changes and the performances (or lack thereof), the Maharashtra 2014 election also show a pattern of stability in various parts of the state. Despite sometimes heavy losses, most parties have remained unthreatened in many of their historical local strongholds, revealing the importance of sub-regional politics. The BJP thus retained 39 of the 46 seats it had in 2009, essentially in the Vidharbha and Nashik regions. The Congress lost 14 seats to the Shiv Sena, but only two to its erstwhile partner, the NCP. It was only able to retain 31 out of 2009’s tally of 82 seats.

The party that should probably worry the most about this outcome is the Shiv Sena. Its renewed appeal to Marathi chauvinism, the resurgence of old bile against the “Gujarat model” and therefore against Mumbai’s Gujaratis did not help the party to broaden its base. Like the Indian National Lok Dal in Haryana, the party was punished for wooing a support base too narrowly defined. It resisted quite well in seats where its candidates had Congress and NCP candidates as their main opponents. It did not do well in seat where it faced a direct confrontation from strong BJP candidates.

The lack of a majority will make it necessary to the BJP to rule with outside support. Attempting to woo the NCP would be a sound strategy, as it would prevent or delay the formation of an anti-BJP front, as has happened in Bihar, and marginalise further its now-junior partner, the Shiv Sena.