Instead, this storied Kolkata football team, founded in 1891, is now struggling to survive.

For one, Mohammedan Sporting has a lexical problem. Since the Prophet’s name is attached to the club, they cannot accept sponsorship from liquor brands that support two of Kolkata’s biggest clubs, East Bengal and Mohun Bagan. Other backers aren’t forthcoming. Yet, maintaining a top-flight, I-League team these days means spiralling costs, and clubs like Mohammedan Sporting that depend on membership and ticket sales simply cannot survive and compete.

The closure ‒ temporary or permanent ‒ of Mohammedan Sporting is like the end of an era, the sign of an age gone by. After all, this is the first Indian side to win a trophy on foreign soil, the Aga Khan Gold Cup in Dhaka in 1960, beating Indonesia’s Makassar 4-1 in the final. They were also the first Indian club to win the Calcutta League in 1934.

However, their appeal transcends the football field. In the pre-Independence era, they were a rallying point for the Muslim nationalist movement in the 1930s. When they became the first Indian club to win the prestigious Calcutta League five years in a row (1934-38) and the first to do the double ‒ win the Calcutta League and IFA Shield in the same season in 1936 ‒ they became the symbol of Muslim unity. They had frenzied support all over undivided India.

In the post-Independence period, they became the first Indian club to win the Calcutta league in 1948. This victory came when Kolkata was still tense in the aftermath of the Partition riots. Old timers sometimes recall how their faith in Indian democracy got restored due to the unbiased supervision in the 1948 Calcutta league, which enabled their team to win. Football thus became the great social equaliser.

As Mohammedan Sporting’s fame spread, players from East and West Pakistan regularly came to play for them in the 1950s. They were the biggest crowd pullers anywhere in the subcontinent.

They were so popular that the Prince of Nepal, a keen player himself, came all the way to Kolkata to play for this famous club and became the first Hindu to represent Mohammedan Sporting. By the 1960s, Mohammedan Sporting changed its rules and formed teams with players from other communities, too. In fact, the last great Mohammedan Sporting team of 1980 and 1981, which won the DCM, Rovers Cup and Calcutta league, had a majority of Bengali Hindu players. This did not affect their support base.

For many decades, the organisers of the annual Durand and DCM football tournaments considered Mohammedan Sporting as their best bet for earning revenue. In the days before sponsorship, ticket sales were the biggest source of money and Mohammedan Sporting’s popularity ensured capacity crowds every time they played in the Delhi Gate stadium (now Dr. Ambedkar Stadium).

The proximity of the Walled City to the Delhi Gate stadium also ensured a near full house whenever the Kolkata team played. It was a party when Mohammedan Sporting played in the Capital city, with their vociferous supporters singing songs, chanting slogans, blowing horns or whistles and waving club banners. 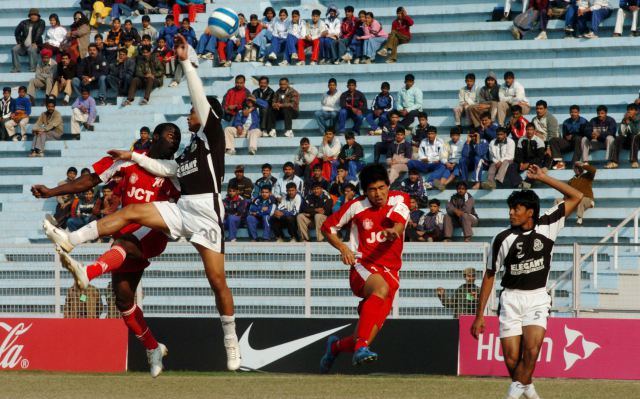 JCT (in red) and Mohammedan Sporting in action in 2007. (Press Information Bureau)

The impromptu songs were a source of delight. In 1967, when the brothers Ramana (outside right) and Pappana (striker) played for Mohammedan Sporting, the fans in Delhi adapted a popular song from the film Ganga Jumna to chant encouragement. “Sawan ka Mahina, Ramana kare centre, Pappana kare score,” they would sing.

Legend of the Durand

On Dec. 12, 1940, Mohammedan Sporting met the Royal Warwickshire Regiment in the prestigious Durand tournament final, before a crowd of 100,000 at the Irwin Amphitheater, where New Delhi’s National Stadium now stands. Eminent Muslim politicians flew in from far-off cities like Kolkata, Dhaka, Hyderabad and Bhopal for the match, while common supporters arrived in trains and tongas to watch the clash.

The final was also the first time a football game of such importance had been officiated by an Indian referee, Captain Harnam Singh. Then a civilian sergeant in the Army Office in the Delhi cantonment, the referee had been even been given a police escort from his house in the cantonment area to the stadium.

At the ground, however, there was a minor crisis. The British linesmen, Warrant Officers Oliphant and Greene refused to officiate as they said it was below their dignity to be linesmen under a comparatively junior referee like Harnam Singh. They felt slighted and backed out from the match. The Durand Society organisers tried to persuade the recalcitrant duo but in vain.

As per tradition, the Viceroy of India, then Lord Linlithgow arrived at the Stadium, to inaugurate and attend the final. When informed of the crisis, Lord Linlithgow threatened to court-martial Warrant Officers Oliphant and Greene. Sensing trouble, the reluctant duo relented. Musing on the incident later, Harnam Singh had said, “This tension only added to my pre-match nervousness. I felt better when Major Porter gave me a hot cup of cocoa laced with brandy.”

Eventually, centre forward Hafiz Rashid and inside left Saboo scored the goals for the Kolkata team as Mohammedan Sporting beat their British opponents 2-1. This victory by a team consisting of 11 Muslim players was a massive boost to the Muslim national movement.

For generations, stories of this famous victory were narrated in the houses and bylanes of Old Delhi.

Many old timers consider the 1940 Mohammedan Sporting team as the greatest ever. They were the first Indian club to win the so-called Triple Crown ‒ the Calcutta League, Durand and Rovers Cup tournament in the same year. They also became the first team in the history of the Rovers Cup (started in 1891 in Bombay) to win the tournament without conceding a goal.

Their successes led to frenzied support and Muslims in every city of undivided India were fans of this team. They had an abundance of money and were the first Indian team to play with boots, with a focus on proper diet and physical fitness for their players.

Due to their massive support base, Mohammedan Sporting were also the first to procure talent from all over India. Defenders Jumma Khan (who later in life became the brand ambassador for the Indian tea industry), Bachi Khan and Saboo joined from the North-West Frontier Province (now Pakistan’s Khyber Pakhtunkhwa). Inside forward Rahmat and midfielder Mohiuddin joined from Bangalore. Anwar from Quetta was the captain of the side. Inside forward Rahim came from Hyderabad, goalkeeper Usman Jan was from Delhi and ace scorer, centre forward Rashid, from Ajmer in Rajasthan.

In 1987, Mohammedan Sporting won the Rovers Cup ‒ their last significant piece of silverware until 2013, when the team won the Durand tournament again after 73 years.

As the Durand kicks off again this year, the trademark black-and-white jerseys of the 123 year-old club will be missing. But for the sake of Indian football ‒ and the thousands of fans ‒ one must hope that the once invincible Mohammedan Sporting returns to scoring goals and creating history.

Mohammedan Sporting is not shutting down, but it is suspending operations