Become a Member
Ad
On the face of it, Prime Minister Narendra Modi’s Make in India initiative isn’t protectionist – it prefers to encourage outsiders to invest in Indian manufacturing . But it appears to have inspired Indians with a preference for swadeshi. Even when it comes to mobile phone apps.

A look at the Communications category on Google’s Play Store, which lists out the most popular messaging apps, shows a surprising name at the top of the list. Ahead of the immensely popular WhatsApp, Facebook’s own Messenger app and Viber, sits Telegram.  The app, which essentially offers the same user experience as WhatsApp with a few different features such as desktop usage, has suddenly shot to the top of the play store. 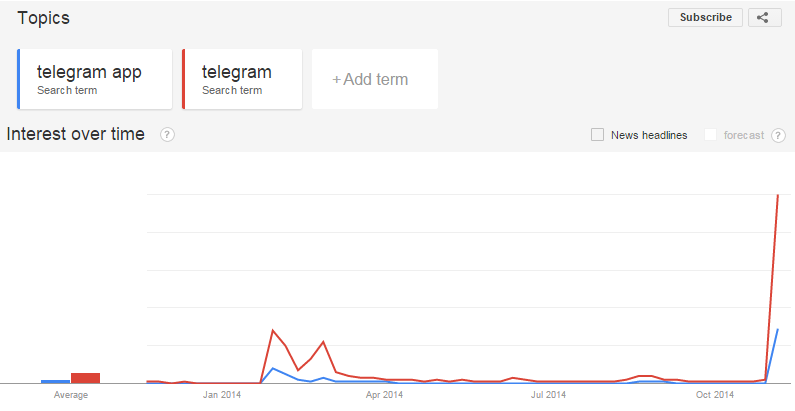 Checking this on Google Trends also confirms its recent popularity. Unless users have suddenly become interested in the 19th-century technology (as they did last year, just before India shut down its telegram department), it isn't immediately clear why they have suddenly become interested in an app that isn't very different from the ones that are currently popular. So what gives?

Over 1,5 million users have signed up for #Telegram in the last two days.

One reason for this sudden spurt could be those who wish to crossover to another instant messaging app to avoid WhatsApp’s new blue ticks. But the answer – as noted by NextBigWhat – also appears to be, at least in part, because of a nationalist message being forwarded over social media insisting that Telegram would aid in Modi’s Make in India plans. 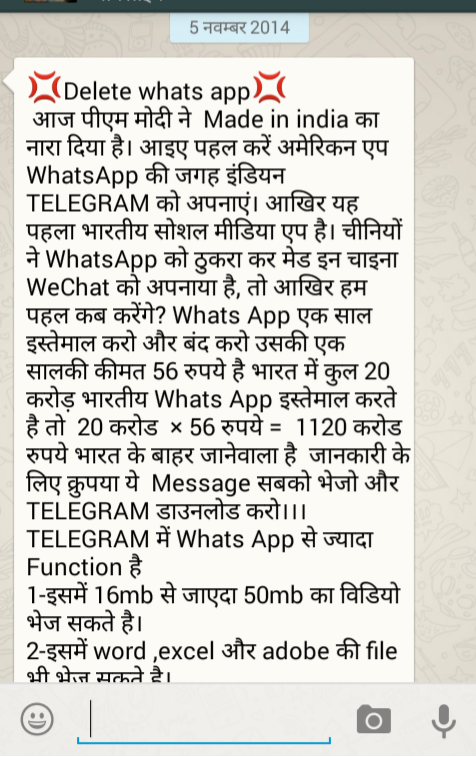 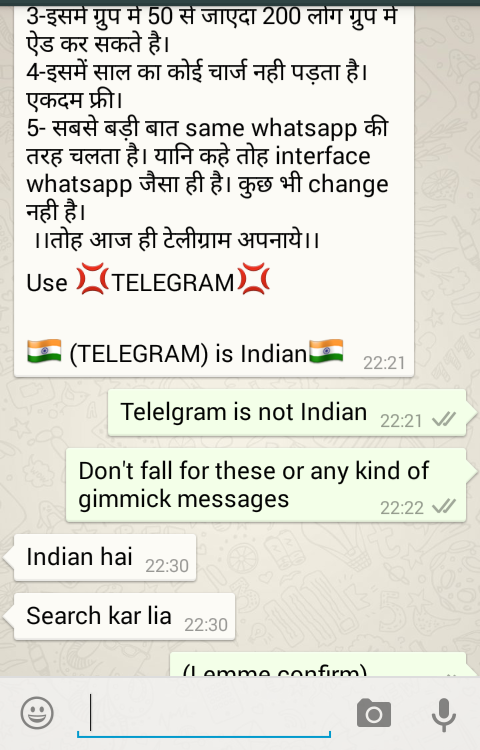 The message, in Hindi, insists that WhatsApp is an American company and so, if Indians spend the expected (but rarely paid) Rs 56 per year on the app, up to Rs 1,120 crore will leave the country, presuming a consumer base of 20 crore users.

It adds that when China realised this, it pulled its own “Make in” move and developed WeChat.  To avoid this capital flight and to support Indian products, the message asks Indians to download Telegram. It even lists out the reasons Telegram is better.

There’s just one problem. Telegram isn’t Indian. The company was founded by two Russians who also own Russia’s largest social network, and has its headquarters in Berlin. The Frequently Asked Questions section on the site specifically insists that Telegram “does not belong to any country in particular. It is a global non-commercial project with contributors from all over the world.”

It’s completely unclear how the company's background got turned into a story about Telegram not only being Indian but also representing Make in India. After all, there are indigenous messaging apps, like Airtel-affiliated Hike. Like other foreign brands that people have always assumed are Indian, like Bata, it appears that a completely unconnected company will ending up reaping the benefits of this swadeshi trend.