Contribute Now
Ad
India has a glorious cinematic heritage. The first feature-length film, Raja Harishchandra, was made in 1913. Yet, there are no known full-length copies of the movie. Of the estimated 1,300 silent films made in India, only about 1% are still available. Over the century, thousands of films have gone up in smoke due to neglect and apathy. Of the lakhs of films that have survived, many are in urgent need of restoration to preserve them so that they can be viewed by new audiences.

That is what the  Film Heritage Foundation hopes to help out with.  Set up by advertising filmmaker Shivendra Singh Dungarpur earlier this year,  the foundation is organising a film restoration workshop in February. With a mix of technical workshops on the craft of preservation and lectures by experts, the workshop will cost Rs 50,000 per participant. Art and its preservation comes at a price, Dungarpur told Scroll.in in an interview.

Dungarpur is well-placed to steer the drive. In 2012 documentary, he made a documentary titled Celluloid Man, which details the lasting contributions of National Film Archive founding director PK Nair to protecting India's film heritage. Dungarpur has established a collaboration with Martin Scorsese’s World Cinema Foundation, and persuaded the organisation to restore Uday Shankar’s Kalpana [from 1948] and Sri Lankan director Lester James Peries’s Nidhanya  [from 1972]. He is also a patron of the British Film Institute and a member of the Fondazione Cineteca di Bologna, the legendary film archive in Italy.

But can one man and his small team succeed where others have tried and failed – to persuade Indian filmmakers to open up their treasure troves for scrutiny?

How did the Film Heritage Foundation fall into place?
It started in January. After I made Celluloid Man, the choice was to make a feature film. But what I saw during the making of Celluloid Man was worrying. Why did I become a filmmaker? Because I watched these great films from around the world. I can’t live my life without these films, and they are as much a part of my life as people.

We have no foundation for film heritage in India. We have an archive [the National Film Archive of India], but nothing for restoration. A few restorations have happened mainly abroad, such as Mrinal Sen’s Khandar.

Tisha Cherian, who is my wife, and the actor Irawati Harshe, and I, we run the show. We have a board of advisors that includes Gulzar, Kumar Shahani, PK Nair, Krzysztof Zanussi, Jaya Bachchan, and British journalist and filmmaker Mark Cousins.

One of the first activities of the foundation has been in the field of education.
There are three or four main things. One is to preserve and restore and facilitate restoration. We have also made a move towards education. So much has been lost, and we need to start making people aware of this. We are running two modules. At the schools in Rajasthan, we are teaching English through Indian and international films as an extra-curricular activity. We don’t teach filmmaking – we are teaching people to inculcate the aspect of heritage, to figure out a sense of what a visual can achieve.

We have a small place in Byculla [in central Mumbai] where we maintain 35mm prints of around 150 films, many of them from India. We are also coming out with a list of 50 existing films, such as Sant Tukaram, which has been compiled by Nair and which need immediate restoration. These are films until the sixties that have been preserved with the archive, but they need to be restored.

Restoration doesn’t come cheap. Who will foot the bill?
Organisations like the World Heritage Foundation have their money. Scorsese himself raises money all over the place. We don’t have a corpus yet. The Rajasthan school initiative got some sort of funding. We are now looking for funds for the restoration. I am paying for the operational bits.

People have come forwards to give scholarships for those who are applying for the film restoration course, such as Vidhu Vinod Chopra and Anupama Chopra, Aamir Khan and Kiran Rao, and Siddharth Roy Kapur.

How much does proper restoration actually cost?
Kalpana would cost at least a crore rupees. I was told Garm Hava [the restoration of which was funded by businessman RD Deshpanday] cost about that much. Anybody who says that it costs less is saying that because they are going through the digitisation process without going through the real thing.

The British Film Institute was trying to raise 80,000 pounds for each of the nine silent films by Alfred Hitchcock that they restored this year. In India, the attitude is very commercial – the belief is, what will we get from this? We can merge passion and commerce. But people want to only think of commerce. 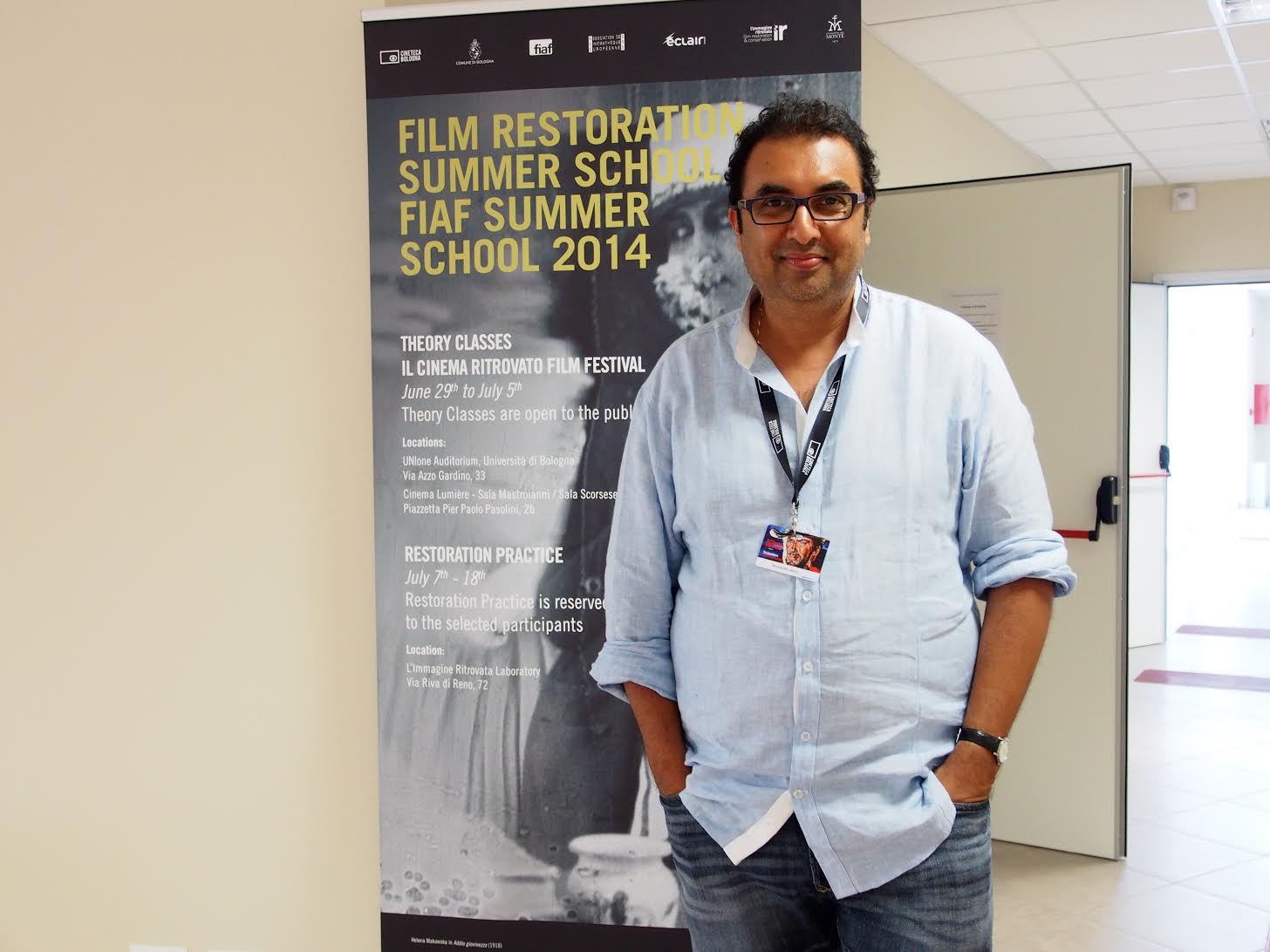 We have started getting material from many filmmakers. AR Kardar’s family has said that we can look at the scripts of his films. Kidar Sharma’s family has agreed, as has Saeed Mirza. Filmmakers like Shyam Benegal, Sai Paranjpye and Govind Nihalani have told us we can look after our stuff.

Many of them are realising that there needs to be some taking care of this heritage. Time is running short for all of us. Unless you preserve well what is left, you can’t start restoring.

We want to restore the films that are not in great condition and that need to come back into the public domain. Any film that is restored needs to be screened to the public at large, and not at a 10.30pm night slot.

Many of our filmmakers haven’t taken lessons from the West. The industry has not gathered its momentum on this issue. The moment our film industry realises that it is a part of a larger system, it will happen.

Isn’t copyright an issue when it comes to restoration, especially among rights holders from filmmaking families?
Copyright will always remain a major problem. People have this suspicion because they equate filmmaking with moneymaking. They need to be trained to think of cinema as an art form.

If a big company is giving money to restore a movie, it will want its name in the beginning of the film. Most people have an issue even with the black card before the film. Ultimately, you have not made the film, you grandfather has. And you still want to benefit from it.

We don’t want to get into copyright issues at all at the foundation. We are not here to own anything. We are here only to facilitate restoration.

Nothing has started yet on the restoration front because we need to generate funds for the project, the copyright holder needs to agree, and then we start the process. We will then have to raise money.

Uday Shankar’s Kalpana is an interesting case study. Its copyright has been in dispute for years between Shankar’s family and producer Sunil Jindal, who bought the film from a woman Shankar had gifted it to. Who does such a classic belong to?
Kalpana is a tricky question. The issue of copyright was always there. The NFAI [National Film Archive of India] is clear and rightfully so, that until it gets the clear papers [declaring who the rightful copyright holder is], it will not announce the new name.

The second issue is that Indian film families do not accept that copyright expires after a number of years. Some families and studios are holding on to copyright years after it has lapsed. So I can’t use a clip from, say, a film called President made by New Theatres in 1937.

Unless, the studio or the family has worked out a licensing model, so that the company that has restored a film lends it out for a number of years to recover costs.

Have any of the film-producing families offered to put in their own money?
Nobody, not yet. But at least they have become aware.

When I wrote to people to restore films through the foundation, one of the immediate responses I got was, we will restore our films ourselves because the restorer will get credit.

Some film producers prefer to let a film get destroyed. Every time I talk to people, they say, what is in it for you? They don’t understand that this is my passion. One producer told me that his 13-year-old son had restored his films on his computer. I don’t even know what that means.

Part of the problem is that we have dissociated our cinema from an art form to the extent that it has become a commodity.

What role does the NFAI play in our cinematic heritage?
The archive is the Mecca, it is the temple. Nair told me once that a young girl said to him, what is the meaning of an archive when we have all our films on our laptops? He told her, everybody has a shrine, but everybody still goes to the temple.

The archive has guarded our films. But what we have left behind, we need to take forward. The industry needs to find value for its stuff.

Bollywood in 2015: It’s all about hating your parents