Contribute Now
Ad
There are many complex reasons why people decide not to accept the science of climate change. The doubters range from the conspiracy theorist to the sceptical scientist, or from the paid lobbyist to the raving lunatic.

Climate scientists, myself included, and other academics have strived to understand this reluctance. We wonder why so many people are unable to accept a seemingly straight-forward pollution problem. And we struggle to see why climate change debates have inspired such vitriol.

These questions are important. In a world increasingly dominated by science and technology, it is essential to understand why people accept certain types of science but not others.

In short, it seems when it comes to climate change, it is not about the science but all about the politics.

Back in the late 1980s and early 1990s differing views on climate science were put down to how people viewed nature: was it benign or malevolent? In 1995 leading risk expert John Adams suggested there were four myths of nature, which he represented as a ball on different shaped landscapes. 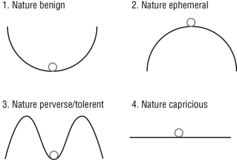 How stable will the Earth-ball be in each state? John Adams

* Nature is benign and forgiving of any insults that humankind might inflict upon it and it does not need to be managed.
* Nature ephemeral. Nature is fragile, precarious, and unforgiving and environmental management must protect nature from humans.
* Nature perverse/tolerant. Within limits, nature can be relied upon to behave predictably and regulation is required to prevent major excesses.
* Nature capricious. Nature is unpredictable and there is no point to management.

Different personality types can be matched on to these different views, producing very different opinions about the environment. Climate change deniers would map on to number one, Greenpeace number two, while most scientists would be number three. These views are influenced by an individual’s own belief system, personal agenda (either financial or political), or whatever is expedient to believe at the time.

However, this work on risk perception was ignored by mainstream science because science up to now operates on what is called the knowledge deficit model. This suggests that people do not accept the science because there is not enough evidence; therefore more needs to be gathered.

Scientists operate in exactly this way, and they assume wrongly the rest of the world is equally rational and logical. It explains why over the past 35 years a huge amount of work gone into investigating climate change – even though, despite many thousands of pages of IPCC reports, the weight of evidence argument does not seem to work with everyone.

No understanding of science?

At first failure of the knowledge deficit model was blamed on the fact that people simply did not understand science, perhaps due to a lack of education. This was exacerbated as scientists from the late 1990s onwards started to be drawn into discussions about whether people believed or did not believe in climate change. The use of the word “belief” is important here, as it was a direct jump from the American-led argument between the science of evolution and the belief in creation.

But we know that science is not a belief system. You cannot decide that you believe in penicillin or the principles of flight while at the same time disbelieve humans evolved from apes or that greenhouse gases can cause climate change. This is because science is an expert trust-based system that is underpinned by rational methodology that moves forward by using detailed observation and experimentation to constantly test ideas and theories. It does not provide us with convenient yes/no answers to complex scientific questions, however much the media portrayal of scientific evidence would like the general public to “believe” this to be true.

It’s all about the politics

However, many who deny climate change is an issue are extremely intelligent, eloquent and rational. They would not see the debate as one about belief and they would see themselves above the influence of the media. So if the lack of acceptance of the science of climate change is neither due to a lack of knowledge, nor due to a misunderstanding of science, what is causing it?

Recent work has refocused on understanding people’s perceptions and how they are shared, and as climate denial authority George Marshall suggests these ideas can take on a life of their own, leaving the individual behind. Colleagues at Yale University developed this further by using the views of nature shown above to define different groups of people and their views on climate change. They found that political viewsare the main predictor of the acceptance of climate change as a real phenomenon. 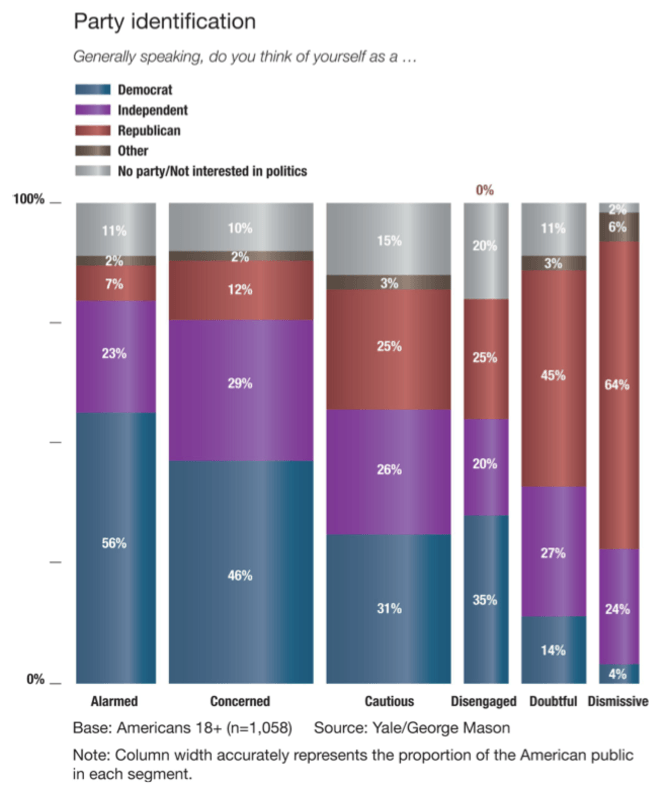 This is because climate change challenges the Anglo-American neoliberal view that is held so dear by mainstream economists and politicians. Climate change is a massive pollution issue that shows the markets have failed and it requires governments to act collectively to regulate industry and business.

In stark contrast neoliberalism is about free markets, minimal state intervention, strong property rights and individualism. It also purports to provide a market-based solution via “trickle down” enabling everyone to become wealthier. But calculations suggest to bring the incomes of the very poorest people in the world up to just $1.25 per day would require at least a 15 times increase in global GDP. This means huge increases in consumption, resource use and of course, carbon emissions.

So in many cases the discussion of the science of climate change has nothing to do with the science and is all about the political views of the objectors. Many perceive climate change as a challenge to the very theories that have dominated global economics for the last 35 years, and the lifestyles that it has provided in developed, Anglophone countries. Hence, is it any wonder that many people prefer climate change denial to having to face the prospect of building a new political (and socio-economic) system, which allows collective action and greater equality?

I am well aware of the abuse I will receive because of this article. But it is essential for people, including scientists, to recognise that it is the politics and not the science that drives many people to deny climate change. This does mean, however, that no amount of discussing the “weight of scientific evidence” for climate change will ever change the views of those who are politically or ideologically motivated. Hence I am very sorry but I will not be responding to comments posted concerning the science of climate change but I am happy to engage in discussion on the motivations of denial.