Contribute Subscribe
Ad
When he was appointed the Attorney General of India on May 28 last year, Mukul Rohatgi said  in an interview to NDTV that he would avoid cases that posed a conflict of interest between his past practice as a private lawyer and his new job as the government’s top legal officer. One month into the job, he told journalists that he had decided to recuse himself from the 2G spectrum allocation case because he had represented some of the accused companies.

But six months after his appointment, in another case, Rohatgi appeared for the government despite defending the company in the same matter as a private lawyer a year and half before..

The case pertains to an alleged customs duty evasion of Rs 861 crore by the $3bn Welspun Corporation Ltd, one of the largest textile companies in India. Customs duty is a tax imposed on imports. When the government wants to encourage certain imports, it waives off the duty, which amount to an incentive for the importer.

What is the case about?

Between 2006 and 2007, Welspun imported goods at Kandla port that it declared as non-alloy metals. Since non-alloy metals were eligible for custom duty benefits, the company was saved Rs 861 crore as taxes.

But four years later, the Directorate of Revenue Intelligence submitted a report that said the company had mis-declared the goods, passing off alloy steel as non-alloy metals.

In April 2013, the commissioner of customs at Kandla imposed a penalty of Rs 861 crore on Welspun and Rs 5 crore each on its managing director and a few other employees.

The company challenged the order in a writ petition in the Bombay High Court. But the court said the matter must be heard by the relevant adjudicating authority, which in this case was the Mumbai office of the Director General of Foreign Trade.

Even as the appeal against the order was being heard by the Director General of Foreign Trade, in May 2013, the company filed a special leave petition in the Supreme Court. Rohatgi represented Welspun as a private lawyer. The apex court disposed off the petition saying "We are not inclined to interfere at this stage.” 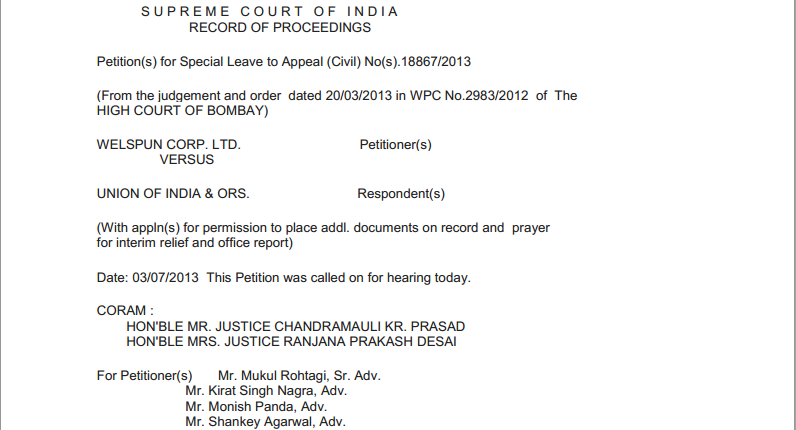 Ruling on the case in September, the Director General of Foreign Trade upheld the order of Commissioner of Customs and asked the company to re-pay the amount which it had wrongly availed as duty exemption.

The company appealed in the Customs, Excise and Service Tax Appellate Tribunal. The tribunal ruled in favour of Welspun favour on May 22, 2014. 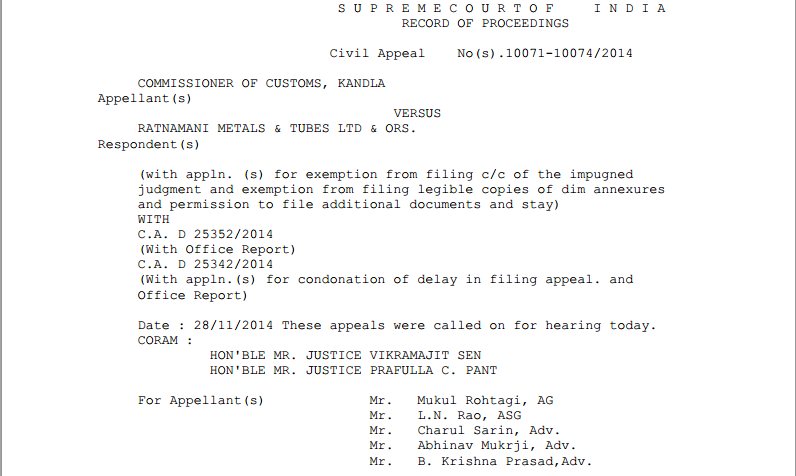 Welspun did not respond to questions emailed to its spokesperson.

Does the case amount to conflict of interest?

The issue of conflict of interest was raised within the Department of Revenue in the Ministry of Finance on two occasions – first in October and again in December. Scroll has reviewed both the letters which flagged off concern over Rohatgi appearing on behalf of the government in the case despite being on the other side of the fence in the past.

But in an emailed response to a questionnaire, Rohatgi denied that there was any conflict of interest. He sought to draw a distinction between the two instances when the Supreme Court heard the matter. “You have mentioned an SLP of 2013 which was decided on 3/7/2013 in which I must have appeared for Welspun. The instant case is Civil Appeal 25352/ 2014 and the two cases are different,” he said. “Conflict of Interest is only this that I would not appear in the same case for the opposite side.”

However, Mathew Nedumpara, a senior lawyer who heads the National Lawyers Campaign for Transparency and Reforms, a non-profit organisation working for transparency in higher judiciary, found Rohatgi’s defence unconvincing. “Most of the litigations go through a different process in different forums like the adjudicating authority, tribunal, lower judiciary, Supreme Court," he said. "Similarly, this case has also gone to different forums but the facts that it is the same subject matter, same cause of action and same parties make it same case.”

Maintaining that the Attorney General should have recused himself from the case, Nedumpara pointed to rule 33 of the Bar council of India, which says, “An advocate who has, at any time, advised in connection with the institution of a suit, appeal, or other matter or has drawn pleadings or acted for a party, shall not act, appear or plead for the opposite party.”

Other senior lawyers, who requested anonymity, said that in the absence of clear conflict of interest rules within the government, it is upto law officers to adhere to “self-imposed restrictions”.

“What we need in India are clear rules defining conflict of interest,” said a senior lawyer, “not just for legal officers but also for our members of parliament and government ministers.”