Feb 25, 2015 · 04:30 pm
Saumya Tewari, IndiaSpend.com
You would think a country of 282 million illiterate people and an ambition to become one of the world’s leading economies would invest more in education. But despite a growing annual budget, India just does not do enough.

The Ministry of Human Resource Development, which handles school/higher education and adult literacy, grows richer every year, but it still accounts for only 5% of the government’s expenditure of over Rs 17 lakh crore ($289 billion).

Last financial year, the MHRD was ranked 5th, with only 4.6% of the total central government budget set aside for education.

The Bharatiya Janata Party had promised to increase the spending on education to 6% of GDP in its election manifesto. The first budget by the Narendra Modi-led government did not see much change in the allocation to MHRD.

Finance Minister Arun Jaitley’s budget presentation on February 28 will now reveal if the BJP intends to walk its talk.

Let us now look at the allocations for MHRD vis-a-vis total government expenditure. 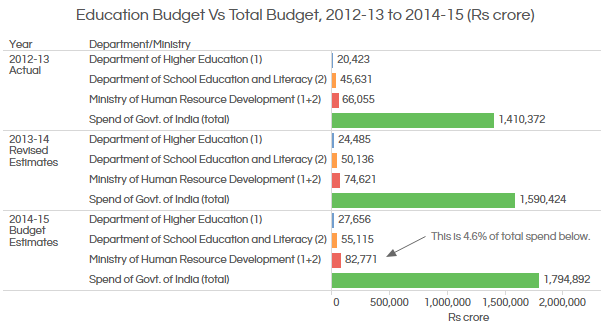 IndiaSpend has previously discussed the low quality of school education, based on the Annual State of Education Reports (ASER); gaps between public and private schools and across classes; how school education in India stutters on enrolment, teachers and infrastructure and higher education.

We also found 38% vacancies in central government universities across India. With these state of affairs, the question we must pose: Are we spending enough on education?

The simple answer: No.

Average public spending on education across the world was 4.9% of GDP in 2010 while India spent only 3.3% of GDP, according to World Bank data.

Let us compare the spending of some countries with India.

The low spending on education is clearly reflected in India’s low literacy rate in India. For the purpose of this report, we have selected two developed countries with high human development ranks and the BRICS nations (recent data for China is not available).

Literacy continues to be a huge challenge for India, after six decades of independence. The literacy rate has steadily improved, but too many people are still illiterate, as the chart below shows.

The BRICS economies are similar to India, but in terms of education, they are closer to more developed economies with literacy rates of more than 90%.

Since the government is expected to focus on skill development, the challenge is to improve the education infrastructure and monitor outcomes. While we have witnessed some success stories from states in terms of outcomes in primary education, there is still a long way to go.