Contribute Now
Ad
Tim Franco, a Paris-born photographer now based in Shanghai, has spent the past five-plus years documenting the intense change that urbanization has brought to the Chinese mega-city of Chongqing.

Until 1997, Chongqing was a neglected city in the poor Sichuan province. It is two hours by plane to any of China’s richer and better-known cities like Beijing, Shanghai, or Shenzhen. It clambers for space between mountains and rivers – the massive Yangtze tears a winding path through the city – and for much of its history, the city was left alone because its geography meant trade with even the rest of China was difficult.

Since 1997, though, it has benefited from the government’s elevation to the rank of “municipality”, which means it enjoys special status among Chinese cities and extra investment opportunities.

Today, Chongqing is the spearhead of one of the government’s biggest domestic projects; to bring wealth and opportunities to the hundreds of millions of people that live in western China, the majority of the country that does not yet benefit fully from the immense wealth generated on the east coast.

Throughout 2014, the municipality’s official population grew by over 4,000 people each week to 29.9 million (link in Chinese). Officially, Chongqing’s central urban population is almost 8 million, but unregistered laborers push the official figure up substantially. Last year, Chongqing’s GDP grew by 12.3% – well above China’s national average 7.4% – to 1.3 trillion yuan ($204 billion), or roughly the size to Qatar’s.

Franco’s images, which will appear in his forthcoming book, Metamorpolis, capture Chongqing’s massive urbanisation, and detail how that intersects with the city’s population, whether indigenous or recently resettled. (Note: I contributed some of the text in Franco’s book.) 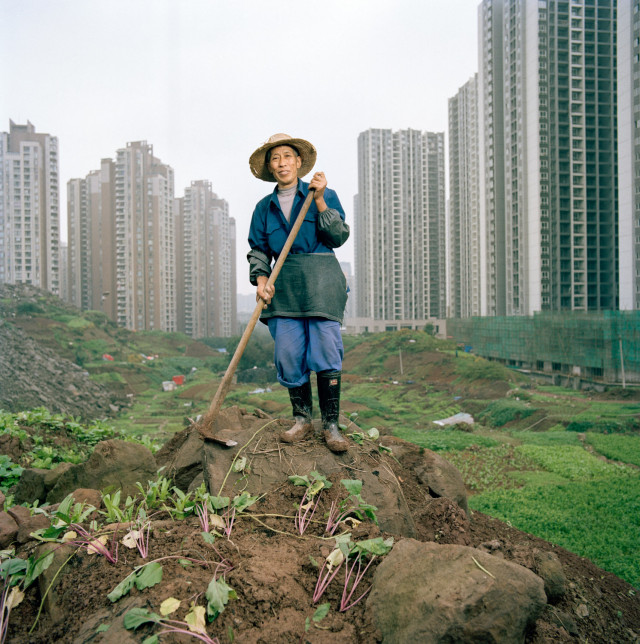 Many of Chongqing’s residents were resettled in the city after their villages and towns were flooded by the creation of the Three Gorges Dam, which dispersed over a million people. Many of their old homes are now underwater. 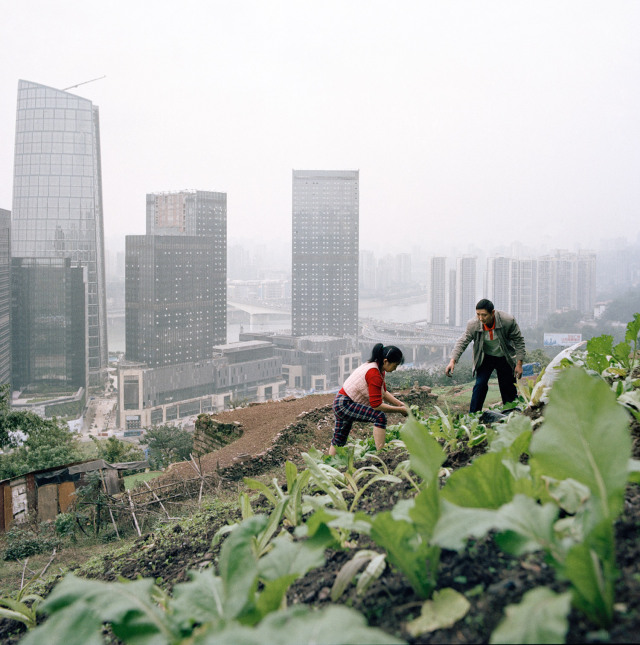 Those who are young enough to acquire new skills have a chance to thrive in the city, which is known for its automobile manufacturing, but also relies heavily on its natural resources industry. But those who are too old resort to what they know best: Farming on a small plot of land. 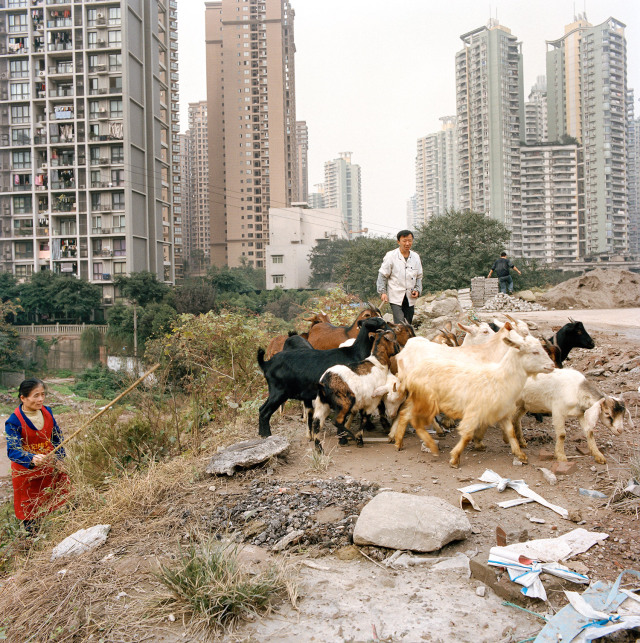 Chongqing has been described as “the biggest city you’ve never heard of”, “China’s Detroit”, “Chicago-on-the-Yangtze”, and “the fastest-growing city in the world”. Despite the immense urbanisation, life continues in some corners as it has done for centuries. 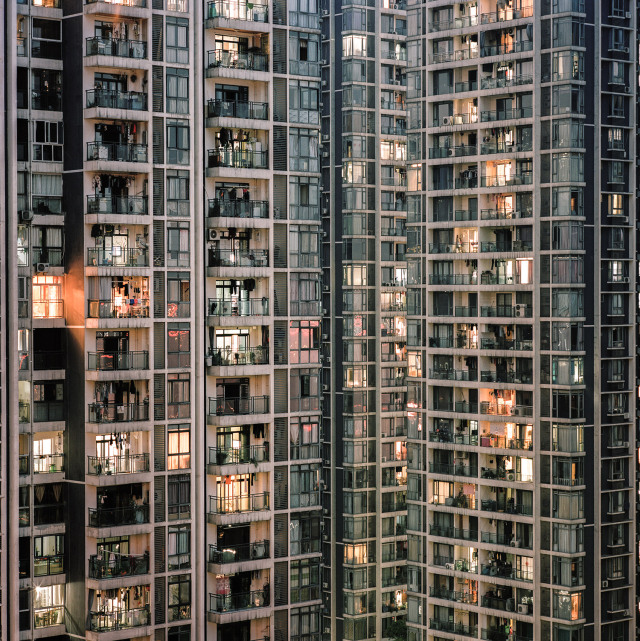 Unlike China’s sprawling, flat cities like Beijing and Shenzhen, Chongqing is a high-density city. Its mountains and rivers mean it is harder to build on, and so there is a greater need to build up, and pack high rises in every available space. 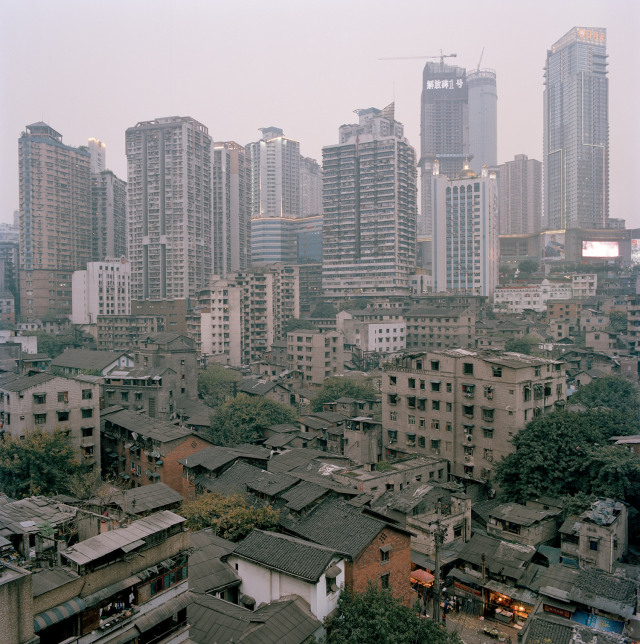 In the background of this image above, taken in 2012, is Jiefangbei, the city’s main downtown. In the foreground is Shibati, a working class neighborhood and the first place many migrant labourers found a home when they arrived in Chongqing. It was a melting pot for regional migrants, but today the Shibati neighbourhood is no longer; luxury riverside high-rises will soon take its place. 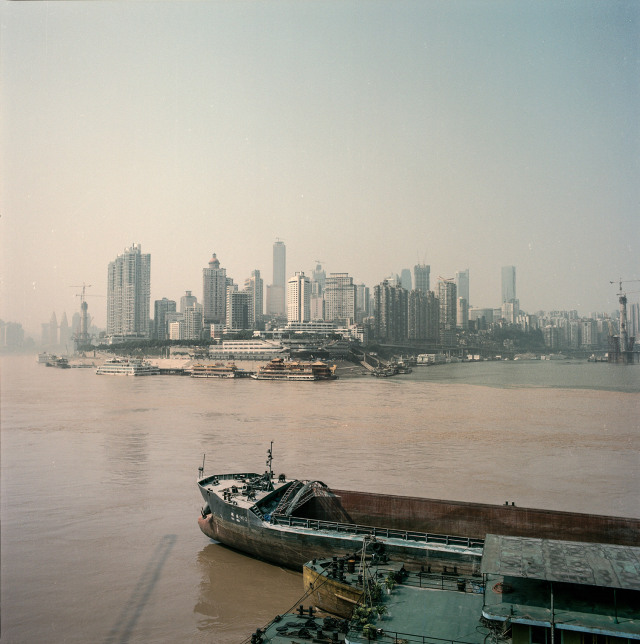 Chongqing sits at the confluence of the Yangzte river (on the left of this picture) and the Jialing river (right). In the middle is the Yuzhong peninsula, home to Jiefangbei and the heart of the city. 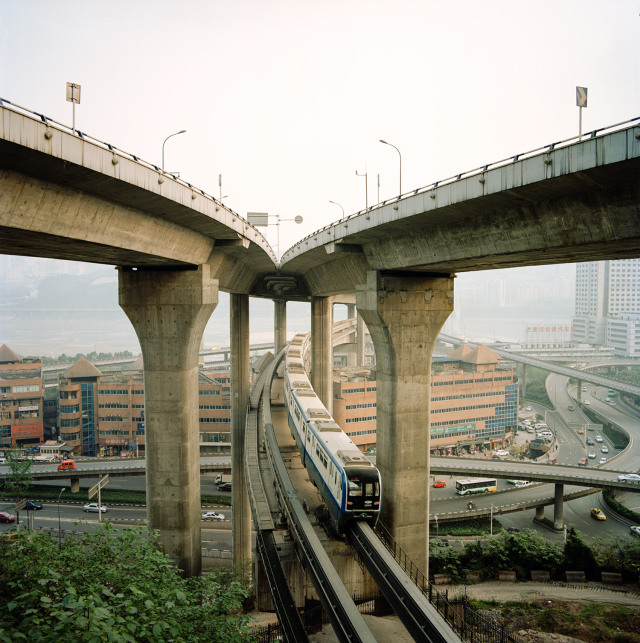 The scale of the city is immense. Chongqing is home to some of the largest bridges in the world,  which in most western cities would be landmarks. In Chongqing they are simply tools for the daily commute. 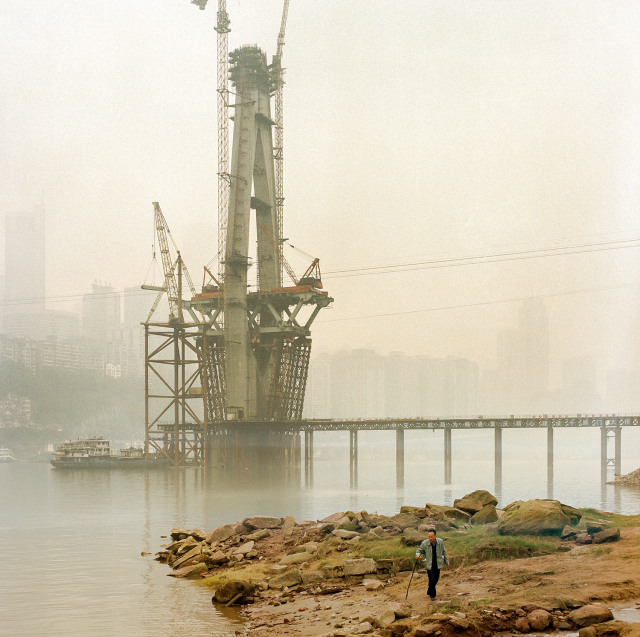 Construction also never stops. The creation of new bridges, tunnels, and subway lines means that the physical and cultural geography of the city is always in flux. Neighborhoods disappear overnight and without fanfare, and new ones are created almost as quickly with the opening of new access roads. 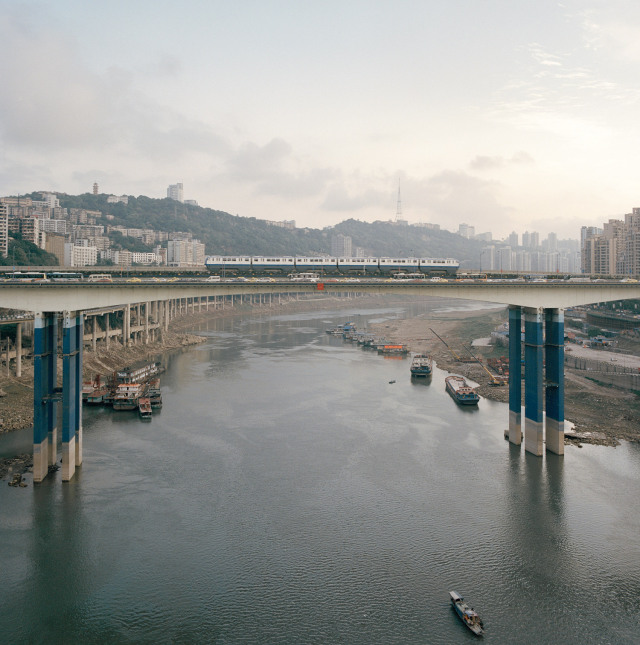 A subway and traffic travel over the Jialing river. In the background is an undeveloped section of Chongqing’s central Yuzhong district. 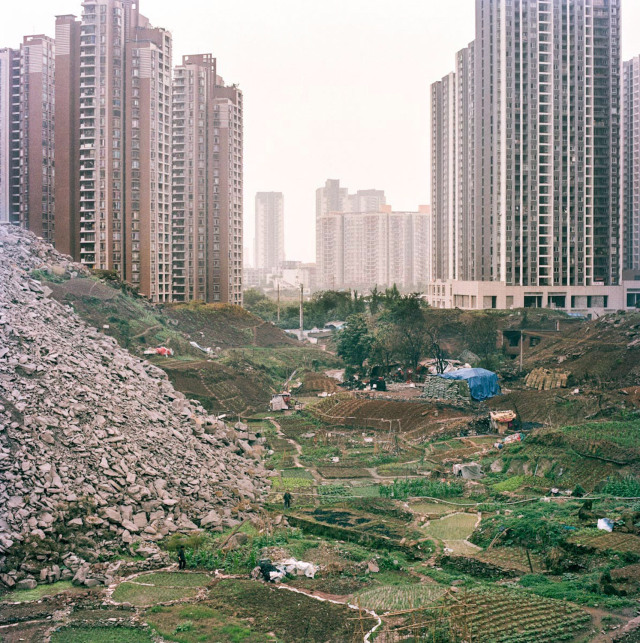 Jiangbei district, a new part of town north of the Jialing river, was largely farmland just 15 years ago. Amid huge building sites, farmers continue to plant on the few remaining plots not yet seized for construction.

All photos credited to Tim Franco.