Become a Member
Ad
New Delhi is a global megalopolis, a national capital, and very soon, a so-called smart city. Nowhere in the world is urbanisation occurring at a faster rate than here. As the world’s second-most populous city with 25 million inhabitants, a massive wave of distress migration is adding 75,000 people each year. The city is bursting at its seams, erupting into a battle for resources, which is making people impoverished in every sense, particularly in their physical wellbeing and intake of food. The word  malnutrition conjures images of pot-bellied, skinny limbed children in arid, poverty-stricken villages of India. But half of New Delhi's two million children are stunted. This series takes a look at what's driving this hidden epidemic.

In Kali Basti, one of the large squatter settlements in West Delhi's Uttam Nagar, if you hop across a criss-crossing delta of open drain rivulets, you will reach a shady passage with curtains on all sides. It is a mid-passage convertible bathroom. When somebody is taking a bath, people who want to cross wait politely.

One end of the curtain opens outside the door of Veer, a little boy, and his even-younger sister, Pari.

It is 3 pm, the TV is blinking, Pari is sitting too close to it. Veer lies in the bed listlessly. His mother, Kiran, brings a parantha doused in ghee. Veer takes it disinterestedly and begins to chew on it as if on some laborious expedition. In 20 minutes, he hasn’t even finished half.

Kiran, 25, pregnant with her third child, sighs, then opens a cupboard containing packets of ready-to-eat food. She pulls out a packet of Maggi cheese macaroni pasta. Veer’s face lights up. This is the moment he looks forward to every day in his dark 50 square foot home.

Veer is like any other boy, except his legs are stick thin, as if they would snap if he stood. Born premature with low birth weight, at four-and-half years of age, he weighs just 9 kg, one kilo less than his three-year-old sister Pari. He doesn't want to go to school because he walks feebly and almost always with support. “The other kids make fun of him and push him," said Kiran. "I would be too worried for him."

Missing woods for the trees

Ever since Veer was born, Kiran has taken him to every hospital she knows – public and private – to understand what is wrong with him. In all the doctor’s visits, he was diagnosed for various illnesses – the last consultation at Max Hospital diagnosed Veer’s tail bone to be containing a fluid that would cost Rs two lakh to extract. But no doctor mentioned malnutrition or referred him to an nutrition rehabilitation centre, where severely malnourished children are treated. On paper, Delhi has 11 such centres. But only five are functional, according to a Mint report.

Ram Kumar, who runs Ehsaas, a non-profit that works on child rights and malnutrition in Kali Basti, said parents rushed to a private hospital when their child came down with diarrhoea or malaria or pneumonia, all of which attack a malnourished child much faster because of its fractured immune system. These diseases are treated individually, without ever spotting the underlying cause. In Veer's case, repeated bouts of diarrhoea and a lack of bladder control are the visible symptoms of illness. His mother pulls out the diaper when she sees my camera. Veer places one sticky leg after another holding her. He is oblivious to the drops of urine falling below.
“The root of the problem is that malnutrition has become socially acceptable in these slum areas," Kumar said. "Each family sees that theirs is not the only child who looks frail, weak and listless, who is falling behind in school. Most children in the neighborhood are this way. They accept their situation and move on without paying it much attention.”
The scale of the problem

The last available nationwide estimate from the 2005-'06 National Family Health Survey showed nearly half of India's children were stunted. The numbers appear to have come down nationally, according to the Global Hunger Index, but the situation in Delhi remains grim. In early 2014, the non-profit CRY released the findings of its survey which monitored the growth of 3,650 children in Delhi's slums over one year. Of the 36% of children found malnourished, 33% children suffered from severe acute malnutrition, a condition that can cause permanent physical and mental damage, even death.

Jaya Singh, who spearheaded the CRY report, visited several government anganwaadi centres. She found growth charts were being plotted with pencils to allow for change. Workers said they were afraid to show the true extent of malnutrition for fear of being reprimanded.
“Unless we make malnutrition a national agenda, tabulate it like a national indicator just like we tabulate the GDP, we are not going to fix it,” said Laxmikant Palo, chief nutritionist at Save the Children, a non-profit organisation.
Junk-food epidemic

It is a hot March afternoon. Most shops in Kali Basti are shut, except the small ones selling chips, Maggi and soft drinks. The school bell rings. The children burst out of the gate. The food cart vendors are awakened from their afternoon stupor. They shoo away the flies away and begin to toss the food around, banging their hot greasy tawas with a ladel, creating an appetising sound. Over oily chole kulcha and an oilier chowmein, there's a riot of small school children waving ten rupee notes.

Earlier this year, Ehsaas conducted a study within Kali Basti to understand what children eat throughout the day. “Most children have tea and phan [rusk] for breakfast," said Najma, a feisty worker who went door to door to conduct the study. "Mothers have to leave early on work so they give the babies what they eat." Food is cooked twice at home: rice, roti, dal [mostly masoor since it’s the cheapest], sabzi [mostly potatoes], but never green leafy vegetables or fruit or milk. Meals are interspersed with Maggi, popcorn and a variety of chips, which kill the appetite for a full meal. It isn't just that children like their taste, there is an economic rationale to rely on junk food. A packet of Maggi noodles costs Rs 10 while a meal of rice, dal and vegetables would cost approximately three times that amount.

This huge lifestyle shift, particularly in urban households, has led to vitamin deficiencies in both poor children who are malnourished and affluent children who are obese. Almost all children face a severe deficiency of iron and Vitamin A due to a lack of fresh fruits and vegetables in their diet, and Vitamin D due to limited exposure to sunlight. 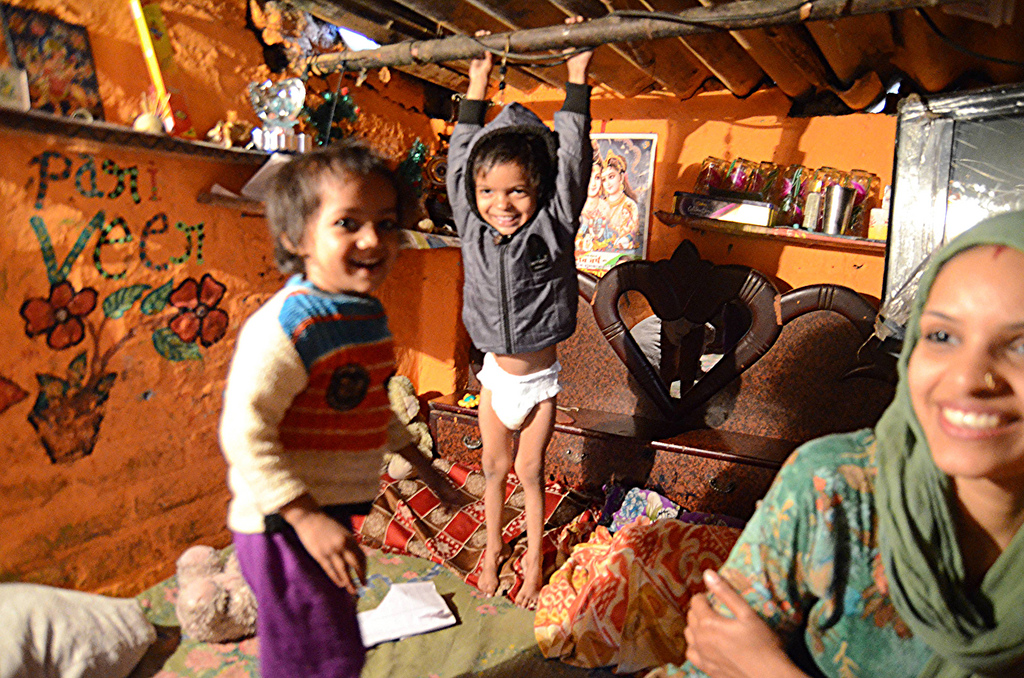 Veer and Pari at home with their mother.

Veer’s mother, Kiran, clears the empty bowl of macaroni. Soon, she will step out to buy hot jalebis. “I know vegetables and fruits are good, but you should look how happy he gets eating these!” she exclaims. There is a bamboo rod tied above the bed. Veer raises his arms, folds his skinny legs and lets out a laugh as he swings. His sister Pari cheers him by jumping on the bed.

Three months pregnant, Kiran weighs just 45 kg. In a tight fitting kurta, there is not the slightest trace of a bump yet. When she was pregnant with Veer, she would faint in utter weakness. Her husband did not care then. But now, she says, after the way Veer turned out, he cares enough to buy her fruit and milk to drink. In that understanding, that malnutrition can be prevented, lies its cure.

This is the first part in a series on the crisis of hunger among Delhi's children. The other stories can be read here.

Shriya Mohan is a media fellow of the National Foundation for India and Save the Children and is researching on urban malnutrition in Delhi.

Middle class children in Delhi are fat – and undernourished