Contribute Now
Ad
On the northern fringes of Delhi, if you get off the last stop of the yellow metro line at Jahangirpuri, and ride for half an hour on one buttock in a packed auto with two dozen people, you will see what first appears to be a giant mountain. As your auto wobbles and people start to get off, you will notice birds hovering above it and get a whiff of its ripe stench. It’s not until you get closer that you realise you are staring at a mammoth landfill, 22 meters high, growing at 2,200 tonnes each day, which provides a backdrop for the entire Bhalswa resettlement area.

The people of Bhalswa were forcefully evacuated from various parts of Delhi during a beautification drive in the years 2000-'02. They were promised modern amenities. But it was this slushy wasteland, bordering on this landfill that they were finally dropped into in truckloads.

The landfill continues to grow beyond its capacity, without a scientifically lined pit. During the monsoons, it acts like a sponge, explains Yogesh of the Bhalaswa Lok Shakti Manch. It soaks in the rainwater and releases it mixed with toxins, contaminating the ground water, and unleashing a wave of jaundice, malaria and other diseases among the 20,000 people who continue to live on its foothills. As for the children growing up in Bhalswa, they don't grow up much after all.

An emerging body of scientific research suggests that many among India's 162 million malnourished children under the age of five are suffering less from a lack of food and more on account of poor sanitation. Research has shown a direct correlation between poor sanitation and the prevalence of stunting, a form of malnutrition which constricts a child’s natural height.

“These children’s bodies divert energy and nutrients away from growth and brain development to prioritise infection-fighting survival. When this happens during the first two years of life, children become stunted,” Jean Humphrey, a professor of human nutrition at Johns Hopkins Bloomberg School of Public Health, told the New York Times last November. "What’s particularly disturbing is that the lost height and intelligence are permanent."

The cure to open defecation

In South Delhi, near the Okhla landfill, in the slum area of Indira Kalyan Vihar, the non-profit Save the Children has built a large public toilet complex. On a drizzly March morning, when I visited the toilet complex, a few enthusiastic community members greeted me and showed me the sophisticated waste treatment system which treats waste water before reusing it as flush water in the toilets. A bio-digester treats solid wastes before releasing them in the sewer drains. 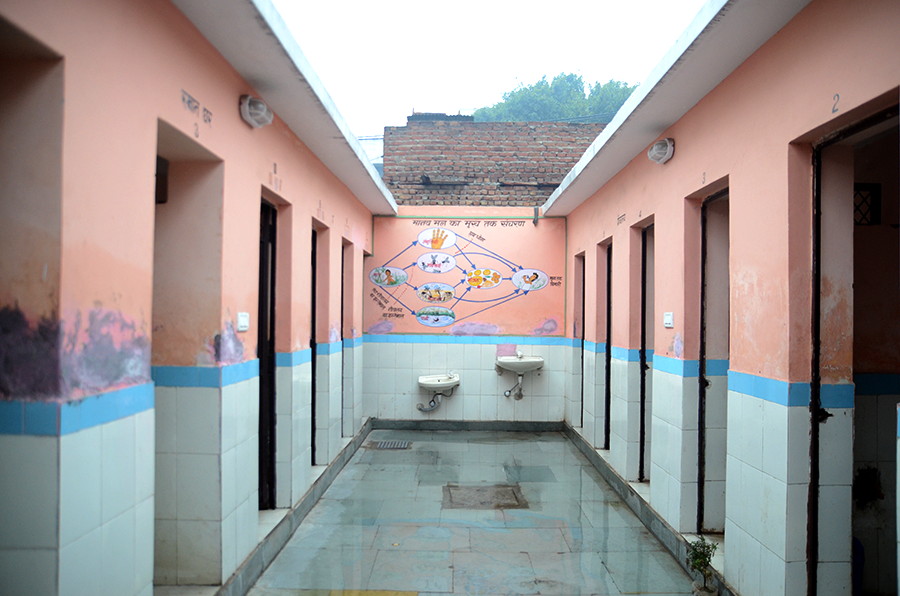 The toilet complex built by Save the Children.

The toilets were sparkling clean, without a trace of any foul odour. But in the half hour I spent there, not a single person walked in to use them. People in the slum said the facility was clean and nice but they only use it to go for “number 2” and not to urinate. While the fees to use the facility looks reasonable – Rs 2 for using the toilet and bath and Rs 5 for washing clothes – quick maths shows a family of five members that depends on the facility could end up spending nearly Rs 1,000 rupees a month.

The fight over water

In Bhalswa, the ugliest fights are not over toilets but water. The slum does not have piped drinking water. “In the summers, the ground water gets so polluted because of the landfill and children suffer skin rashes and their eyes itch. People get desperate,” said Pushpa who founded the Bhalaswa Lok Shakti Manch to fight for the basic rights of the residents since they were first resettled.

It takes several rounds of complaints for the local municipal tankers to arrive. The residents go battling their way through the crowd with their plastic containers. The water is never enough and patience runs dry. The residents recall one time when a man pulled out a knife ready to kill another over a pail of water.

“Living conditions – which include poor sanitation, unclean drinking water and not having a basic minimum amount of living space per person – play a huge role in causing urban malnutrition,” said Rakesh of Pardarshita, a non-profit working in Nayi Seemapuri in East Delhi. A study they did last year showed 41% of 1,000 children living in two slum clusters were malnourished.

Shahida, 21, lives with her two children Wahid and Sarah in the darkness of a corner house that has no ventilation. Little Wahid is wailing when I walk in. He refuses to let his mother stand up, clinging to her sari. Shahida has brought him food from the neighbouring government-run anganwadi. The day's menu is lemon rice. The grains appear dried, hardly suitable for a baby.

Wahid is two-and-a-half years old but weighs 5 kilos, just a kilo more than his 45-day-old baby sister Sarah. His mother complains that he has stopped putting on weight or growing taller for over a year. He still cannot stand without support, cannot walk or talk when a normal child his age would be storming through the house.

For a year and half, he was only fed milk. "Much of malnutrition occurs because mothers don't transition their children from liquid to semi-solid to solid food at the correct stage," points out Dr Laxmikant Palo, a nutritionist with Save the Children.

"The compulsion to work makes mothers just give a bottle of milk in the hands of the children simply because that takes the least effort on their part," said Santosh, a dietician at Guru Gobind Singh Hospital. "On top of it, these bottles are never properly sterilised and the children catch severe stomach infections." 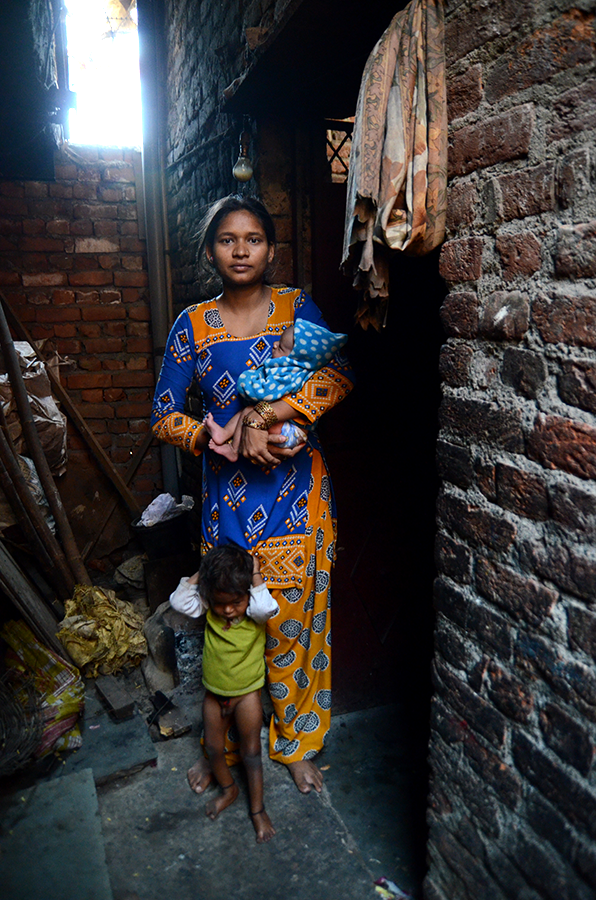 Shahida with Wahid and Sarah outside their home.

Wahid's condition could be attributed to poor sanitation, bad water, improper eating practices or a combination of all. Sarah is just 45 days old and still breastfeeding. But in some months her mother will have to leave her home and go look for work. "How can we make ends meet with one salary?" she asked. Sarah, like her brother, is a victim of the city life and everything it takes away from you. Each healthy child in Delhi's slums is an untold miracle of the hundred odds it had to fight to turn out "normal". Shahida better believe in miracles.

This is the third part in a series on the crisis of hunger in Delhi. The other stories can be read here.

Shriya Mohan is a media fellow of the National Foundation for India and Save the Children and is researching urban malnutrition in New Delhi.