Contribute Subscribe
Ad
Tallayapalem is a village like many others in Andhra Pradesh’s Guntur district. It has lush green fields, and its prosperity is evident from the concrete houses scattered along its central thoroughfare. Somewhat incongruously, one field off the main road houses a canvas tent under which a small group of policemen has been doing 24-hour duty since June 6.

There has been no spurt in crime. Instead, the policemen have been charged with warding away potential vandals from the site where chief minister N Chandrababu Naidu conducted a bhumi puja two months ago. He was seeking the blessings of the Almighty for a project the Andhra Pradesh government hopes will be the kernel of a new capital to rival the likes of Hyderabad. The residue of the ceremony – coconut shells and withered garlands – is still visible at the site. Nearby, workers were building a more permanent shelter for the police. 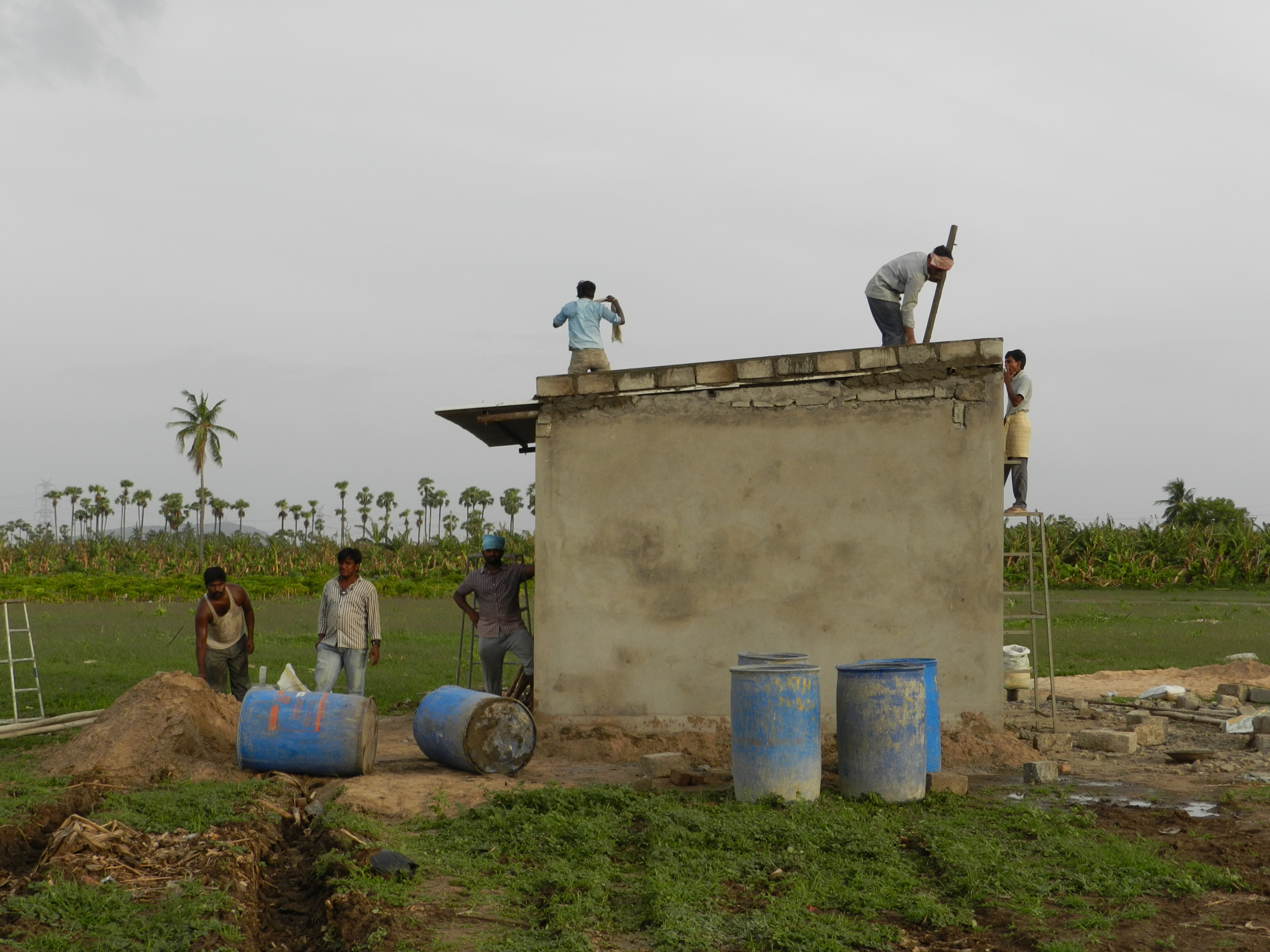 Verdant plots such as the ones in Tallayapalem cover thousands of acres on the southern bank of the Krishna river, just 100 kilometres west of the sea. In a decade, if Andhra Pradesh has its way, these fields will be replaced by concrete roads and glass buildings to realise the state’s great experiment in urban development.

Welcome to Amaravati, Andhra Pradesh’s hope for the future.

It has been two years since the United Progressive Alliance government at the Centre announced that Andhra Pradesh would be split into two states. The decision came after years of agitation by the territory that has now become Telangana.

However, the Act that bifurcated the states left Andhra Pradesh without a capital. The old headquarters, Hyderabad, is now located in Telangana. Andhra Pradesh and Telangana will share Hyderabad as a capital for ten years, after which Andhra Pradesh will have to have to move to a new administrative centre. Various options for a new capital were outlined by a report filed by the Sivaramakrishnan Committee at the end of August 2014. The report described the idea of focussing on a single capital as an outdated concept and pushed instead for several cities in the state to be developed as industrial, investment and technological hubs.

But days before the committee submitted its findings to the Union Home ministry, N Chandrababu Naidu, the newly elected chief minister of Andhra Pradesh, announced that a single capital for the state would come up near Guntur and Vijayawada on Independence Day in 2014. The report now stands largely ignored.

The core of Amaravati will be built on 33,000 acres of land owned by individual farmers between Vijayawada and Thullur along the banks of the Krishna river. There are many reasons to watch the Amaravati experiment. It will be India’s first planned capital city to come up from scratch in decades. It has already become India’s largest experiment in a process known as land pooling, which is being held up as an alternative to land acquisition.

What is land pooling?

Under land pooling systems, landowners voluntarily sign ownership rights over to a single agency or government body. This agency develops the land by building roads and laying sewage lines and electricity connections. Once this is done, it returns a smaller portion of the land to the original owners. But since the plot now has more amenities, its price has probably risen to  match the market value of the owners’ original landholding.

One of the first owners to give his land for the pool was K Nageswarrao, a 60-year-old farmer in Lingayapalem. In return for his one acre of land, he will get 1,300 square yards (about a quarter of an acre) of developed land in the new city. Of this, 1,000 square yards (a fifth of an acre) will be residential land and 300 square yards can have commercial structures such as offices and shops. Nageswarrao will also receive an annual compensation of Rs 30,000 per acre for a fixed period of ten years. Those who own fertile land will get an annual compensation of Rs 50,000 for ten years and a slightly larger portion of land.

As Indian cities expand, land pooling could be the most equitable, acceptable strategy of urban development. Land acquisition, by contrast, often proceeds by force, resulting in the displacement of residents and escalating costs for builders.

“There is no other instance like this in India,” claimed N Srikanth, commissioner of the Capital Region Development Authority that is supervising Amaravati's development. “One way in which the city differs is that it does not disrupt its current inhabitants. We don’t want to destroy last 2,000 years of culture. We will just build on that and move them back here.”

An alternative to land acquisition

Land pooling differs from land acquisition in significant ways. In pooling, land, not money, is the primary medium of exchange. When acquiring land, the authorities sometimes have to compensate owners with up to four times the value of their plots. But instead of paying four times the market rate of their land, authorities often pay them four times the registered value. This amount is usually significantly lower and does not factor in inflation over the years. This makes it difficult to obtain the consent of the majority of plot owners. As a result, land is often acquired by force.

T Jaganmohan Reddy, a farmer who owns 3.5 acres of land in Penumaka but has not yet given it up for pooling, acknowledged the system’s potential benefits. “Both land acquisition and land pooling are harmful to farmers because both ways they are losing their land,” he said. “But in land pooling, at least you are getting [some] land back. With land acquisition, you get four times the revenue rate, but that is no match for the market rate over time.”

Cheaper land for the government

There are several benefits to land pooling, as seen from the perspective of the state. To begin with, the process is voluntary, at least in name, and less cumbersome. If land were to be acquired, the Land Acquisition Act of 2013 requires a much wider range of safeguards for the process, including a social impact assessment conducted by an expert committee and a detailed plan for rehabilitating the original inhabitants.

Land pooling is also much cheaper for the government. The centre’s land acquisition law says that compensation for land acquired can go upto four times the rate of land. Andhra Pradesh has fixed the compensation at 2.5 times the revenue rate. Even this amount is far higher than the figure the government will pay to farmers who give up their land for the pool.

Take Nageswarrao of Lingayapalem. In 2013, the official rate for agricultural and non-agricultural land in Lingayapalem was Rs 5 lakh per acre. Had his land been acquired,  he would have received a flat sum of Rs 12.5 lakh for his one acre of land, according to Andhra Pradesh’s rules. With land pooling, he will receive Rs 30,000 for ten years, with an annual increase of 10%. At the end of this period, the government will have given him Rs 4.78 lakh. But the value of the developed land he receives, a prime urban plot in the capital, will be significant, the government claims.

S Ananth, a researcher who has examined the economic dynamics of the Amravati state capital, explained the calculation involved. “People are speculating on the value of the developed land they will get,” he said. “When pooling land, the ruling party said look, you give one acre of land, you will get a percentage of the future in return. Land today costs Rs 1.5 crores to Rs 2 crores. If they give up their land, what they finally get based on today’s calculation might be Rs three crores instead. Those who thought their land was worth more than that didn’t give it up for pooling.”

The land pooling exercise in Amaravati is the largest such exercise India has seen. However, it is not new. It follows the tried and tested path of pooling in other states – particularly, the Gujarat model.

Gujarat is among the country’s pioneers of land pooling, having conducted  experiments with pooling for several decades. One of the more recent projects, the Dholera Special Investment Region pooled land from farmers and handed them a share of the profits. The usual ratio of land acquired to land returned in Gujarat is 40:60, with the landowner getting back 60% of land. The ratio in Amaravati is closer to 70:30, with the landowner getting back only 30% of land.

Is it working in Amaravati?

So far, the results of pooling in Amaravati have been largely positive. According to Srikanth, landowners have consented to pool 31,000 acres of the 33,000 acres required for the capital area. The state will begin the process of land acquisition for the remaining land by the beginning of August.

Much of this pooling has been voluntary, perhaps because Chandrababu Naidu chose the area wisely.

“Most of the people who have given their land are [Telugu Desam Party] people,” said Santhosh Reddy, a landowner in Penumaka, one of the six villages where there is still significant dissent for giving up their land. “People also gave land according to their caste – the Kammas.”

Though land pooling is being discussed as an alternative to land acquisition, some maintain that its legality is unclear.

According to M Seshagiri Rao, a lawyer and activist associated with the People’s Union for Civil Liberties in Vijayawada, the land pooling system itself is anti-constitutional.

“The Constitution talks about the right to property though it is not a fundamental right,” he said. “The land pooling scheme cannot be a model for the country because it is a biased agreement that does not give the farmer fair compensation. If the government is taking land, it has to give fair compensation. It is trying to avoid paying farmers the market value of their land.”

Land acquisition, he said, at least gives security to farmers by compensating them immediately and does not make them wait for ten years to recover the value of their land.

MG Devasahayam, a retired IAS officer who was closely involved with the building of Chandigarh, said that pooling schemes run by the government lack safeguards.  “The government will take over the land, mortgage it, raise money from banks and hand it over to private real-estate developers,” he said. “The assumption or promise is that in four or five years, the city will be developed and [landowners] will be able to sell it as promised. Who knows if the government will develop the city? And landowners will have to go back to real-estate fellows to develop their land.”

More alarming, some point out, is the clause saying that land owners will not be allowed to approach the courts to claim higher compensation. If the city does not come up, this means landowners could be left without their developed plots and without legal recourse. 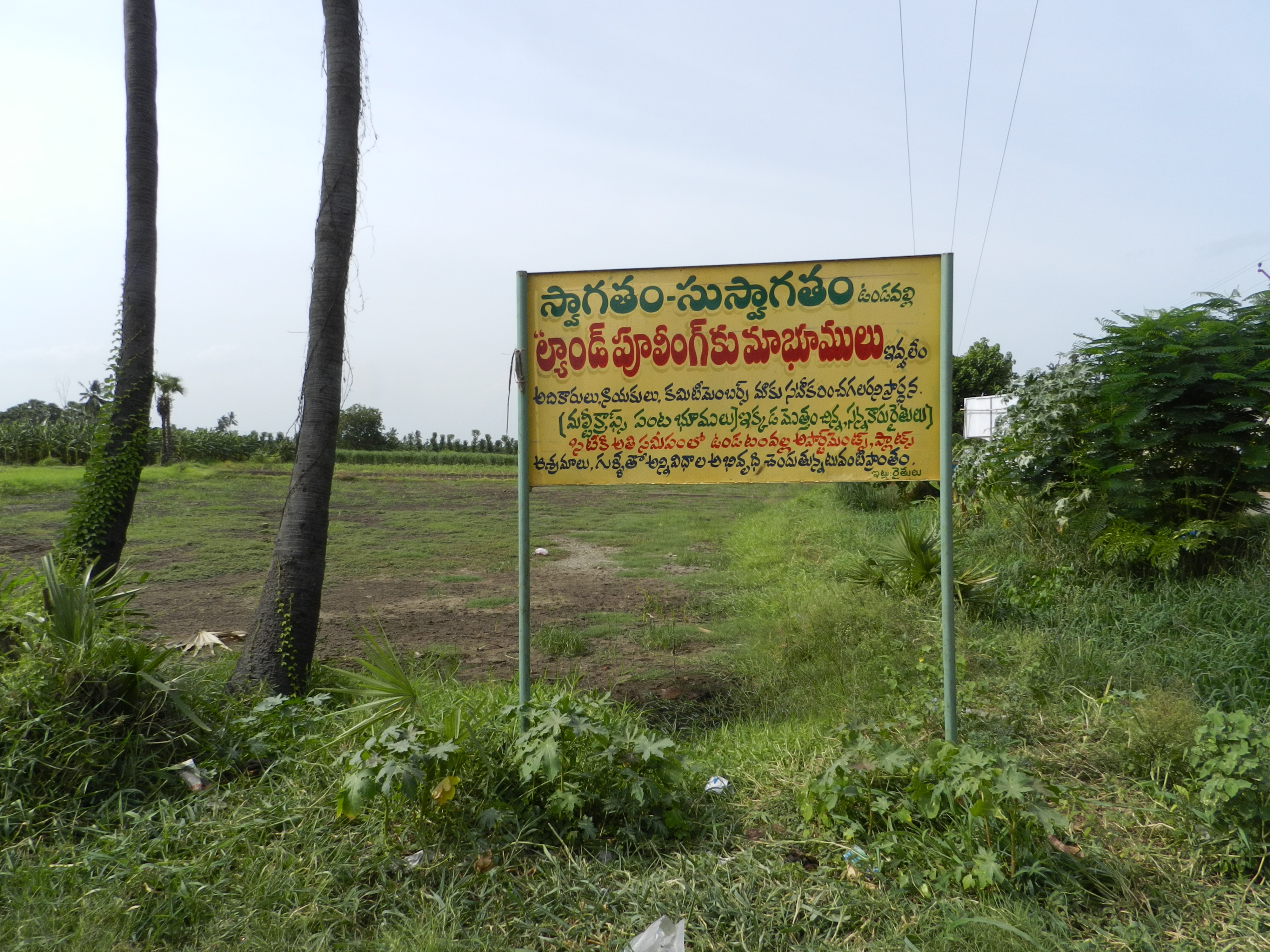 A sign in Undavalli argues against the land pooling process. All farmers there have multi-crop, arable land. Since the village is close to Vijayawada, it is already developing rapidly with new apartment blocks, ashrams and temples.

Land pooling is also not uniform across Amravati. There are pockets of resistance in all the 29 villages that form the new capital region, particularly in six that are still holding out. Several of these farmers own fields that are particularly fertile and return large annual profits to them.

“A capital city is necessary for each state,” said Jaganmohan Reddy of Penumaka. “We are even happy to see it near us, but not if we have to lose our lands.”

As for those who do not own land but live off it, they are equally ignored by both systems that change land use from agriculture to urban. Land pooling, like land acquisition, does not discuss how to create an adequate safety net for this massive working population that will soon be displaced.

This is the first part in a series about Andhra Pradesh's new capital city project.