Apr 18, 2014 · 06:17 am
Gilles Verniers
It is commonly said that the road to Delhi passes through Lucknow, the capital of Uttar Pradesh, India's most populous state. The 2004 general election contradicted that convention. The Congress formed a coalition despite performing poorly in UP and allying with the Left rather than any of the big parties that did well in the state. In 2009, the Congress' return to power was only partially helped by an improved performance in UP.

Despite this, Uttar Pradesh retains a central position in the electoral strategies of the national parties as well as within a larger political imaginary. This despite the emergence of two strong parties of its own, the Bahujan Samaj Party and the Samajwadi Party. The attention that India’s most populous state draws often eclipses important (and sometimes contradictory) political dynamics taking place in other parts of the country.

UP has given India eight of its 14 prime ministers. It has been the home state of the Nehru-Gandhi dynasty for five generations. The United Provinces, as it was called at the turn of the 20th century, has also been the stage for many uprisings against colonial occupation. Many of the nationalists who fought British imperialism in the Gangetic plain would play an essential role on the national stage once India became independent.


The political significance of UP is thus not limited to its numerical strength in the Lok Sabha, to which it sends 80 representatives. In recent years, its politics has come to define the dominant narratives of Indian politics: the decline of national parties, caste or identity politics, religious mobilisations and the criminalisation of politics.

The rise and fall of national parties

During the first three decades after independence, Uttar Pradesh was the plinth of the Congress party and it was through UP that the Bharatiya Janata Party conquered power at the Centre in the late 1990s. The Congress' decline after Indira Gandhi was most sharply marked in UP, where it lost the three components of its winning coalition formula, or the "coalition of extremes" – the dalits, the Muslims and the upper castes, who shifted allegiances to various regional parties and to the BJP.

The meteoric rise of the BJP in the late 1990s – it peaked at 57 MPs in 1998 – was also based on a winning formula, a consolidation of the upper-caste vote combined with the aggregation of a large number of intermediate and lower OBCs (other backward classes) who had never found representation within the backward parties. Nearly 40% of UP’s castes have never been represented in the state assembly, due to their small size or geographical dispersion. 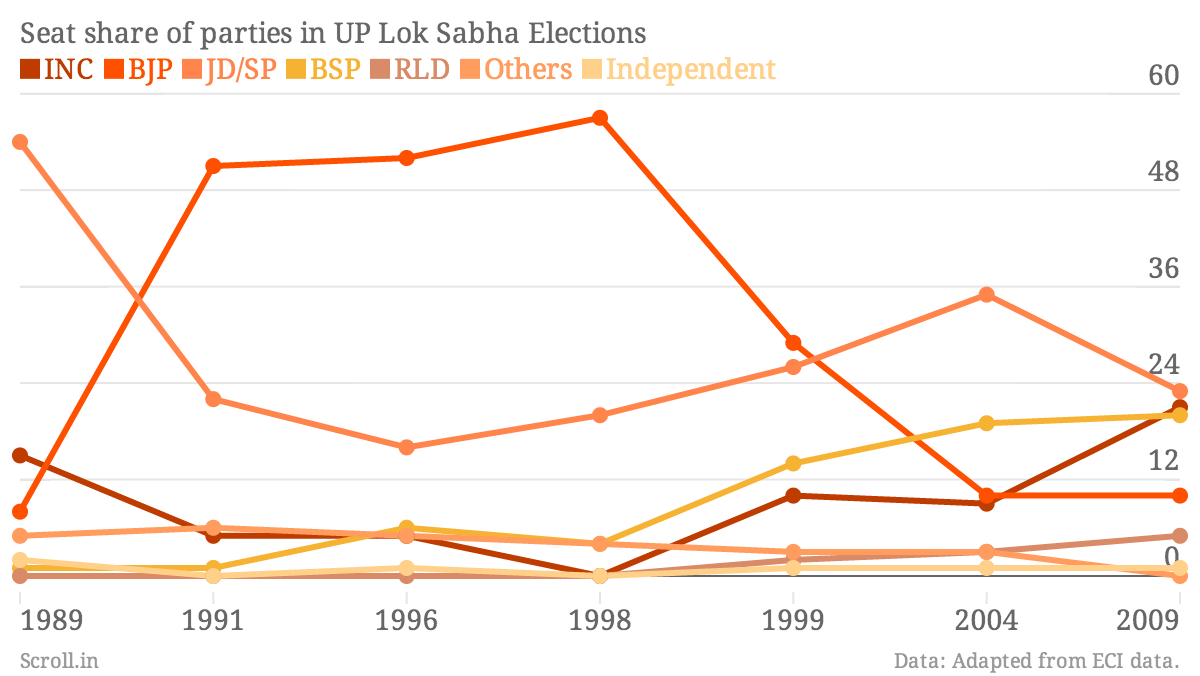 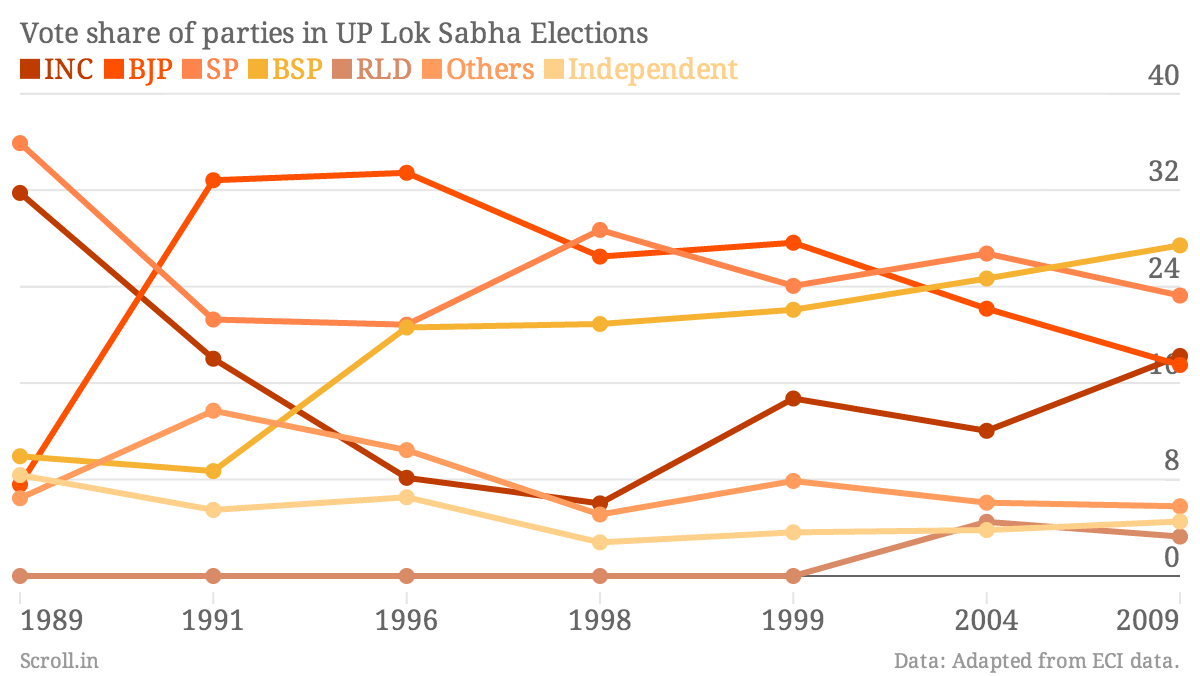 The dominant OBC communities – Yadavs, Kurmis, Gujjars – added to the Jats in western UP, represent only 15% of the total electorate, or 34% of the total backward and Jat populations of the state. Yet they represent the bulk of the OBC legislators in the Lok Sabha and the Vidhan Sabha.

The induction of Lodh leader Kalyan Singh in the BJP and his chief ministership in 1991 was the signal that the BJP would provide space to the more backward groups among the OBCs. This courting of the backward classes irked many upper-caste voters. These voters did not stay loyal to the BJP, and split their votes across party lines in subsequent elections, voting wherever they saw their interests best served. Both SP and BSP had come to terms with the necessity to provide representation to others in order to win seats and inducted many upper-caste candidates.The inclusive character of ticket distribution is what enabled them to build majorities in the Vidhan Sabha later on.

The lower OBCs also dispersed their votes but without being able to bank on a substantial demographic advantage, unlike the upper castes, who represent over 20% of the total electorate. Over the past ten years, the overall representation of OBCs has declined both in in the Lok Sabha and in the Vidhan Sabha, particularly among the non-dominant OBC groups.

In the process, the BJP's fortunes declined as quickly as they had risen. The BJP became reduced to being an urban phenomenon, occupying about 10% of the political space of the state and being progressively challenged by the Samajwadi Party, which tends to dominate in small towns and semi-urban constituencies.

UP politics is usually defined by identity politics. The logic of caste arithmetic is well known but provides an incomplete picture of electoral politics in Uttar Pradesh. Other deep transformations have also been playing out.

First of all, the continuing fragmentation of the electorate has broken the symmetry between caste, candidates and parties. Parties must provide representation to many groups in order to win elections. Some parties have retained a core electorate – Yadavs for the SP and Jatav dalits for the BSP – but these taken together represent less than 21% of all voters.

Similarly, caste groups at the constituency level tend to shift their support to the party or candidates best suited to their interest. The upper castes in particular have split their support in order to ensure a large representation in the assembly. The upper castes regained their 1991 level of representation – well above 40% – in the 2009 assembly elections, by voting cohesively and supporting upper candidates across party lines. 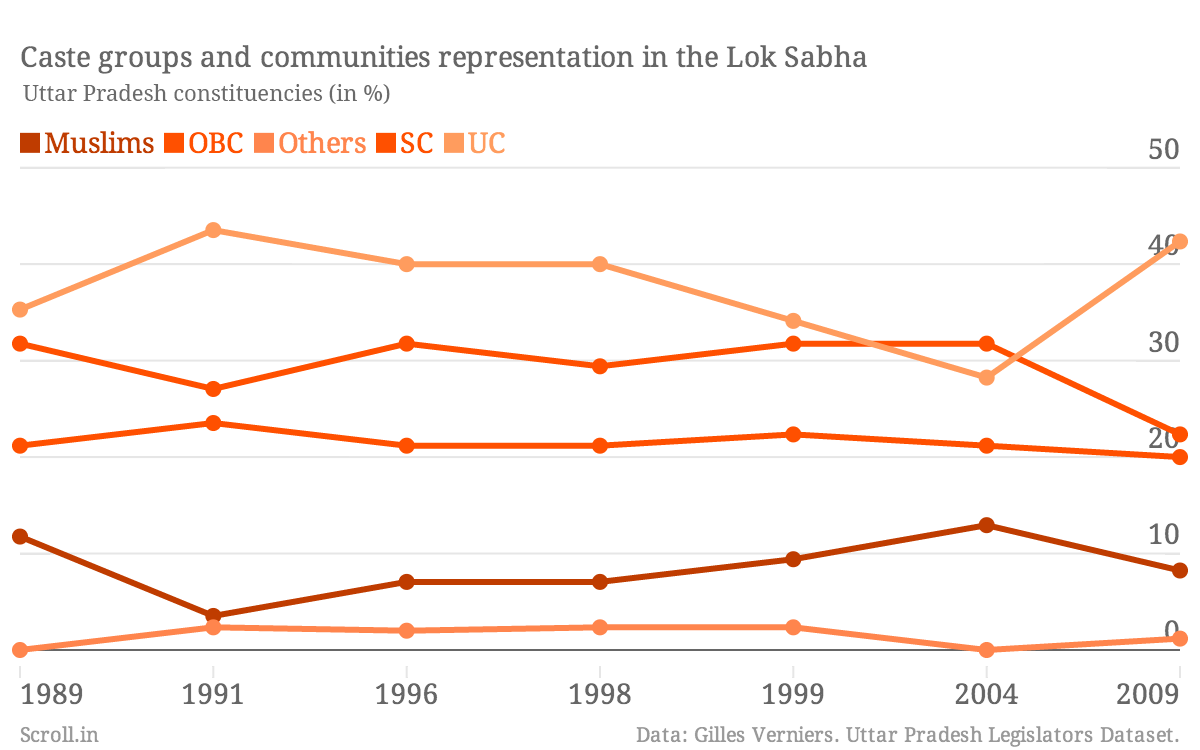 Muslims have followed the same logic and increased their representation through the 1990s, though less impressively at the Lok Sabha level than at the Vidhan Sabha level. In the 2009 Vidhan Sabha elections, they managed to get almost as many Muslim legislators elected as the strength of their population.

These processes do not occur evenly across the state. A rapid examination of sub-regional overviews tells very different stories. For instance, contrary to popular belief, the upper-caste domination has never really been challenged in central UP (Awadh) and the north-eastern parts of the state, around Gorakhpur. Upper castes there have consistently won over 40% of the seats. The rise of Muslims is linked to their demographic distribution. It is in western UP and even more in Rohilkand (north-west) that their ascent has been the most spectacular. In the latter area, the rise of Muslims came at the cost of the upper castes, whose representation at the Vidhan Sabha level declined very sharply.

Different caste groups have different motivations. Some like to vote for candidates of their own caste, for others the issues concerning their caste are more important than the candidate's surnames. In either case, caste does not lose its importance as a vehicle of political mobilisation, but does become de-linked from specific parties.

Why contractors and criminals thrive

From the parties’ vantage points, identifying which local combination to build is half of the work. The other half consists in picking the right candidate within the identified groups.

In the first few decades after Independence, political power was derived from three sources: being upper caste, owning land and acquiring a Congress ticket. Now, six decades later, the economic structure of the state and the social relations interwoven around it have changed deeply. The key to political success is caste numbers – the demography of the group to which a candidate belongs is vital. What also matters is not how much land a candidate possesses – for the revenues from agriculture have relatively dwindled over the years, compared to other forms of economic activities – but what position they occupy in the local economy.

It is no surprise to see that while the caste profile of elected representatives diversifies through time and within parties, their economic profile tends to look similar. Successful candidates are those who either occupy a dominant position in the economy of their constituency or are backed by dominant economic elites, connected with both political and market forces. The newly over-represented professions in politics today are real estate, construction, local industry and liquor.

The high cost of entry to politics favours candidates backed by solid businesses. The tighter control of the Election Commission over the electoral process has reduced the power of muscle but has not yet reduced the power of money. As elections have become more competitive, candidates feel the need to out-spend the competitors. This in turn raises the cost of entering politics.

This duality of identity and business also helps explain why criminals thrive in politics. Some of India’s most notorious criminal politicians are from UP and it was the Congress party that first gave them a leg up when it sought their help to counter its decline in the 1980s. Conscious of their capacity to sway votes, they started to contest for themselves and offered their services to various parties that were anxious to field strong candidates in an increasingly competitive game. Many criminal figures have now turned corporate and use both crime and politics to further their economic interests.

All of this means that the same kind of people tend to get elected from UP, regardless of which parties win more seats. A rapid examination of the declared candidates in the current polls across parties shows that for all the hype surrounding Narendra Modi’s candidacy in Varanasi and the expected BJP wave in the state, these elections remain largely business as usual in Uttar Pradesh.

(Gilles Verniers is a research scholar at Sciences Po, Paris. His work covers various aspects of electoral politics and governance in Uttar Pradesh. He has been based in Delhi since 2005.)