Become a Member
Ad
In India’s urban areas, you can tell the interruption in power supply by an accompanying noise – a diesel genset whirring into life somewhere nearby, releasing plumes of dark smoke into the air. Power failure is so endemic in some areas that factories, call centres, hotels and apartment complexes all install large gensets to provide back-up power.

So much so, that the installed power generation capacity of diesel gensets in India has now exceeded 90,000 megawatts, or the equivalent of 36% of India’s total power generation capacity. This estimation by the power regulator, the Central Electricity Regulatory Commission, in fact takes into account only large units with over 100 kilo volt ampere. If smaller units in apartment complexes and household are taken into account, the figure could be much larger.

Policymakers thus far believed that the installed capacity of such units was just over 1,000 MWs, while in reality it was 90 times as much. And so there is no estimation of how much fuel is consumed by these gensets.

There should be. Because these gensets all consume subsidized diesel.

Fuel subsidies were a little under 2% of India’s GDP in 2011-12, according to IMF calculations. Diesel subsidies accounted for nearly half of it.

The rationale for subsidizing diesel is two-fold. Farmers use it to operate motor pumps to irrigate their farms. And second, cost of transporting essential goods and food needs to be kept down to rein in inflation.

Both these reasons are undermined by the situation on the ground and what researchers have shown.

Nearly 27% of diesel sold in India is consumed by vehicles, the economist Kirit Parikh estimated in 2013. All of these are not trucks transporting vegetables. Many are sports utility vehicles owned by the rich. Parikh estimated that an SUV owner received an annual subsidy of Rs50,000 on account of the diesel subsidy in the name of the poor.

Researchers at the thinktank Integrated Research and Action for Development showed in 2012 that a 10% increase in the price of diesel would only result in a 0.6% rise in consumption expenditure of the poorest 10% of people both in the rural and urban areas. A 4% rise in wholesale price index, which can be caused by fiscal deficit-fuelled inflation, can have a much greater impact, they found.

The government recently set up an expenditure reform commission to streamline spending and ensure better targeting of subsidies.

India is the world’s largest market for diesel gensets along with China and the U.S. According to a report by RNCOS, a consultancy, revenues of diesel genset manufacturers has been rising and is set to go past $3.3 billion by the end of 2018.

“The increase in demand for diesel genset is due to unreliable power and in some cases, due to the lack of access to grid electricity,” says Abhishek Rohatgi, gas and power analyst at Enerdata, a Singapore-based consulting firm. “With no other option available, industrial complexes depend on diesel,” he adds.

While many industries are trying to use renewable energy sources such as wind and solar energy to meet their requirements, regulatory restrictions are a roadblock. “If the regulatory restrictions are lifted, it will go a long way in replacing the DG [diesel generators] sets or at least reduce their use,” says Kuljit Singh, an analyst heading the energy sector at Ernst and Young.

India’s power deficit has declined since 2009-10, according to the power ministry. 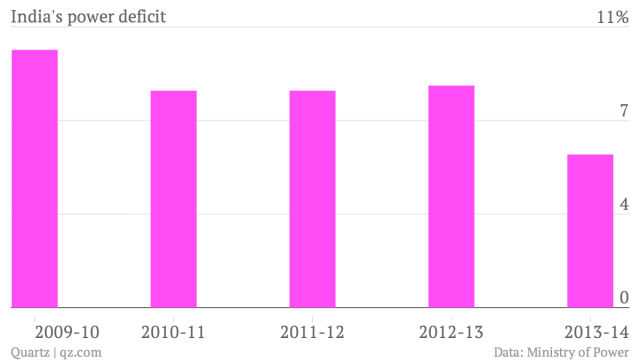 After Maharashtra, is Jharkhand next? ED action steps up pressure as ruling coalition shows cracks