"I’ve been coming to the museum for the last twenty-five years. Initially, I used to accompany my father to help build ‘our house’ for the outdoor exhibit. The museum has grown a lot since then. It was empty and now it has filled up and become like a village, with all the artists and visitors who come. I’ve painted the Warli hut that my father built, as well as modern things the museum has – cement buildings, motorcycles, buses… it has changed, just like our lives have." – Meenakshi Wayada/Warli, Maharashtra
Image courtesy: Tara Books

What does a museum mean? What happens when it shifts from preserving artefacts of lost cultures to displaying the practices of living ones?

A group of folk artists mulls over these questions in a new book, Between Memory and Museum – A Dialogue with Folk and Tribal Artists. The volume packed with image and text is the product of a collaboration between 38 artists and edited by Arun Wolf and Gita Wolf of Tara Books, the celebrated Chennai-based publishing collective.

Work on the book began in 2010, when artists involved with the Indira Gandhi Manav Sangrahalaya in Bhopal participated in a five-day workshop on the nature of the museum. All the artists were involved with this anthropological museum in some way, from establishing it to having their work exhibited there.

The idea for the workshop came Bhajju Shyam, a Gond artist from central India who built a Gond exhibit for the museum.

“We built a house and brought in all kinds of things you find in village homes,” Shyam is quoted as saying in the book. “We made a Gond house, everything was as it is in the village, but it still felt strange to me. It wasn’t home, I wouldn’t feel comfortable sleeping inside it.”

The workshop and the book it grew to be emerged from how artists interpreted and reimagined the museum. Some, like Shyam, spoke of practices that lost their context when they were put inside glass or how these might otherwise have faded away. Others saw the museum itself in different ways. 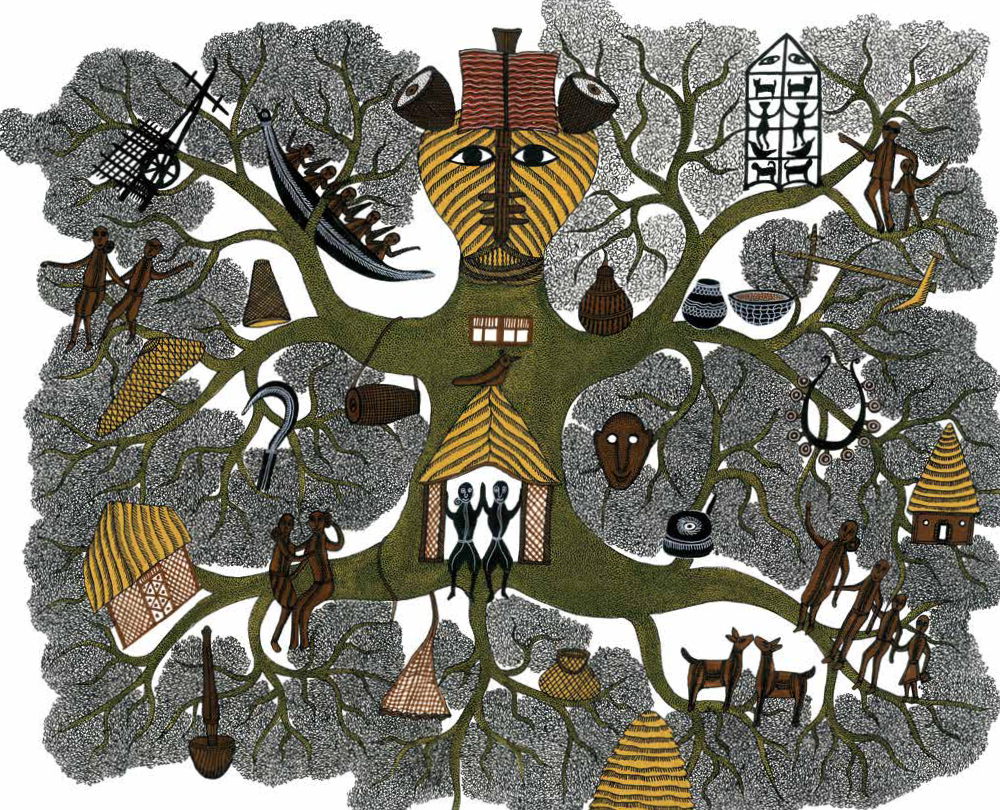 My image shows the museum as a tree. It’s a strange tree. Things are a bit upside down and it’s a little frightening. Right on top, I’ve given it the shape of a drum that can be played. The branches are like paths leading to different places – paintings, objects, and houses. People come to look at these things. The tree contains the gods and goddesses of many different communities. I see the museum as something that is academic, which provides knowledge and information. People do research on us, they gain some understanding and try to pass  that on. One thing I object to is the glass. Whatever is displayed as a token or symbol of our culture, let’s say a drum, has a soul. This soul is submerged and dampened behind the glass. You should be able to pray to it; the display is a problem. Some things shouldn’t be on the ground, and some shouldn’t be hung on the wall. The way they are kept and used also has meaning for us – Bhajju Shyam/ Gond, Madhya Pradesh
Image courtesy: Tara Books

“We wanted to make art theory about folk practices accessible to the general public,” said Arun Wolf. “In our workshop we tried to see where the idea of the museum worked and where it fell short.”

The book also reflects on local traditions and the context in which they are made. 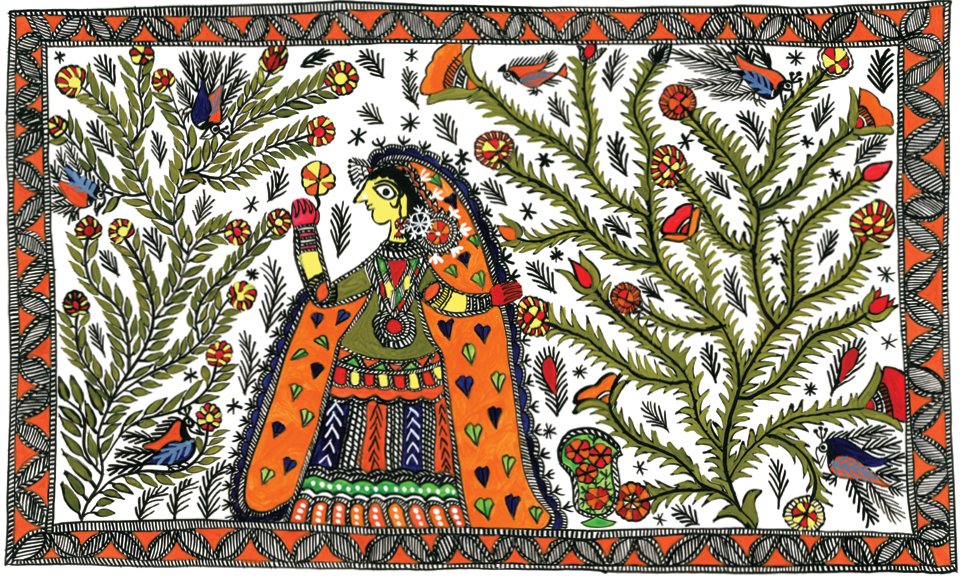 This is a khobar ghar [wedding chamber] painting, we usually do it on the wall for a wedding. The bride is surrounded by some of our auspicious symbols. At home, we would use natural dyes that we make from different leaves – for instance, from the peepul tree – or from mud and minerals mixed with babool glue. But here I’ve done it on paper with acrylic paint. – Urmila Devi (artist) Mithila, Bihar
Image courtesy: Tara Books

Here are other images from the book: 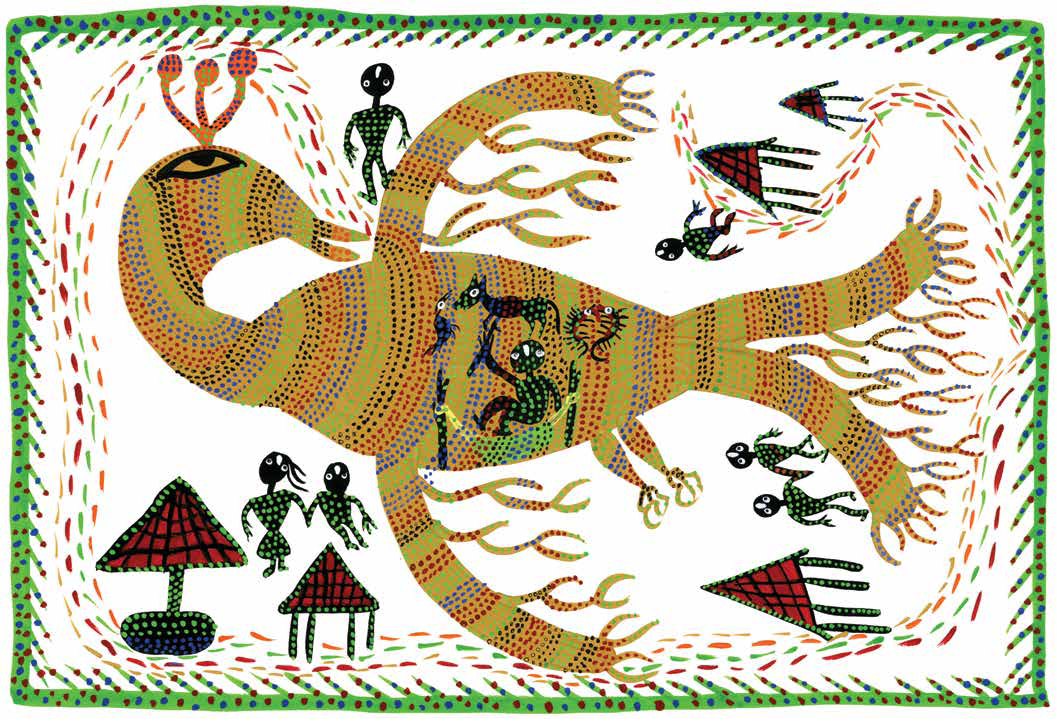 I’ve painted the museum as a peacock. I’m inside the museum, doing a painting on the wall and rocking my baby to sleep at the same time. For the last twenty-five years, I’ve been working at the museum as a daily wage earner, preparing walls and floors for painting. One day, I told the museum director that I can paint too! So, he asked me to come to the gallery and do a wall. That’s when I first took painting seriously! I know a bit about our own tradition and I also watched other artists at work in the museum. It didn’t seem right to copy styles that are not my own, so I paint Bhil art. I’ve come so far and want to go further. I taught my son what I know, the rest of my family farm. I’ve said to them, ‘Try painting, you can all do it.’ – Gangu Bai/Bhil, Madhya Pradesh
Image courtesy: Tara Books 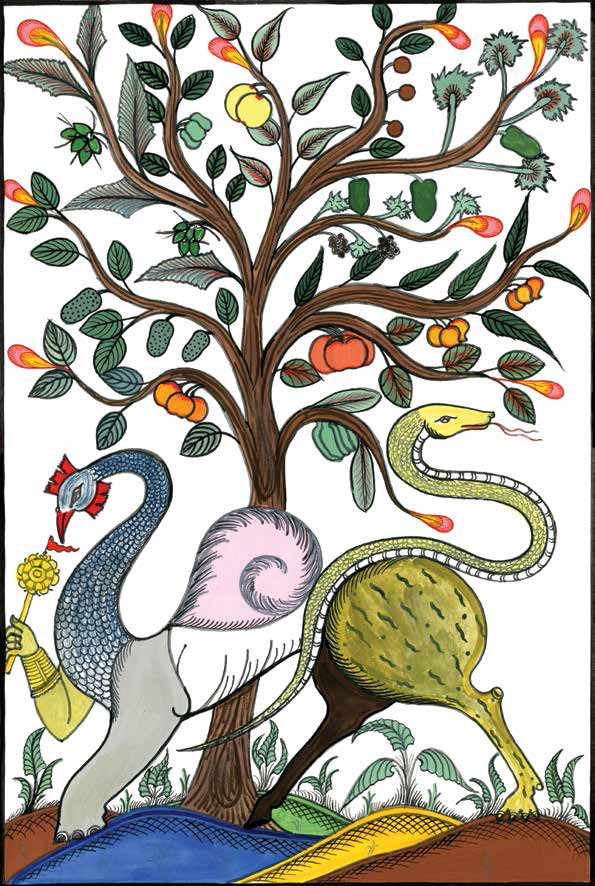 I’ve made the museum in the form of a tree, which has different kinds of fruit on its branches. Here is a papaya, a guava, a mango… I thought of the different arts of India perched on the branches of this tree. At the base of the tree is the Lord, as he appeared to Arjuna in a story from The Mahabharatha. He has taken on the form of a mixed and strangely marvellous animal. Each artist leaves something of himself and his cultural inheritance behind at the museum. Where else can you see the work of so many artists in one place? I think there is something for everyone to discover in a museum. – Prahlad  Moharana/ Patachitra, Orissa
Image courtesy: Tara Books